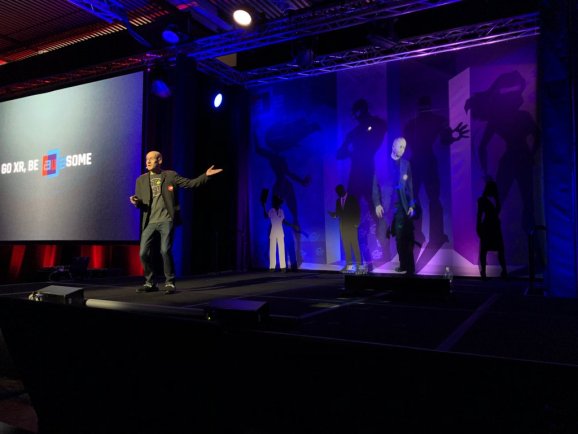 As augmented reality apps and hardware continue to evolve, they still largely deliver solitary experiences that exist in isolation. Now a new industry group plans to develop an AR cloud in the hopes of linking all of these games and services into a shared platform that creates a singular augmented view of the entire world.

The Open AR Cloud Organization will be formally unveiled this week at the Augmented World Expo EU in Munich, scheduled for October 18 and 19.

While the concept had been floating around for a while, work around it began to crystallize a year ago when Ori Inbar, an AR entrepreneur and investor who also founded AWE, released a paper arguing for a unified approach. In a recent interview, Inbar said there was growing concern that the separate approaches to creating AR services was slowing adoption as users had to pick and choose between isolated experiences.

“When I wrote this piece last year, (Apple’s) ARKit had just been announced,” he said. “It was a big moment for the AR market. Now we have this AR development tool from this major developer. But it also exposed the weakness of that, because it was just for building single app experiences. The Open AR Cloud promises that we can really bring AR to the mainstream by allowing collaboration and multiple players to participate.”

The goal is ambitious. The idea is to a create a single, shared cloud where all items that exist in any AR application and are associated with a geographical location can be experienced and accessed. It would create what organizers describe as a kind of “spatial Wikipedia” of all virtual objects.

For the moment, the organization offers a basic, public description on its website:

Our mission is to drive the development of open and interoperable AR Cloud technology, data, and standards to connect the physical and digital worlds for the benefit of all. We believe AR cloud technology will profoundly change the way we see and interact with each other and our physical surroundings. We are dedicated to creating standards, guidelines, tools, and data required to build a better world. We know that, above all, we must protect and preserve our individual and collective freedoms, privacy, dignity, and opportunity … for one and all.

Inbar said he’s been meeting with partners and startups over the past year to hone the principles and map out the technological challenges, which are considerable. For any such cloud, there would need to be a way to protect intellectual property and privacy while also finding ways to encourage openness, collaboration, and sharing. The first official meeting of a working group will happen this week at the Munich event.

“You can imagine how this completely changes the dynamic around AR,” Inbar said.

The effort must also find a way to balance the potential participation of giants such as Apple, who is not yet an official member. Inbar noted that there is some fear in the AR community that a few corporate giants will eventually dominate the space. Should an Apple or Microsoft — or even an upstart like Magic Leap — sign on, the movement would obviously get a giant boost. And yet members worry they would have to cede too much control or that such large players might use the group to scout startups for acquisitions.

“To what extent they will go out of their way to be part of it, we don’t know yet,” Inbar said. “From our side, there is some debate as to how early we want to engage them. Because once they step in, they could overpower these discussions.”

For now, the technical discussions will focus on the interoperability goals, how to slow fragmentation, and the best way to make sure users and their data aren’t being exploited.

“In the Facebook era, if people have realized that we are the product, you can think about what that means in a world of AR,” Inbar said. “It becomes far more serious if you have a camera pointed at you all the time, recording your movements and facial recognitions. Privacy becomes an even bigger problem.”

As the latest edition of the AWE event approaches, Inbar said he feels a growing sense of optimism around AR, even as it has gone through up and down cycles in recent years in terms of consumer and enterprise hype. Beyond Apple, he noted that lots of big companies are making significant development bets in the space, and VC investment in the technology remains robust.

“We’re now at a huge inflection point in AR, where awareness is high and revenue is starting grow,” he said. “But ARKit by itself is not enough to make AR go mainstream. It’s the collaboration that’s been at the heart of any web progress and that’s been missing up until now.”

In addition to the new OARC working group, AWE will be announcing a partnership with analytics firm Digi-Capital to generate more research, data, and case studies around AR, virtual reality, and mixed reality. The goal is to spur further progress via shared lessons while encouraging more investment by VCs and enterprises based on data that demonstrates the technology’s potential and value.

AWE will also unveil a partnership with IEEE’s  International Symposium on Augmented and Mixed Reality (ISMAR) to develop an event that brings people conducting scientific research and industry insiders together to connect academic and commercial trends.