Soulcalibur hasn’t changed much, which is fine. The newest entry in Bandai Namco‘s weapons-based fighting game, Soulcalibur VI, comes out October 19 for PlayStation 4, Xbox One, and PC.

I played the Xbox One version, and I found an experience that isn’t all that different from the one I had with the original Soulcalibur, which came out for the Dreamcast back in 1999. Soulcalibur VI is pretty, yes, but, more important, it’s  accessible. With many fighting games, I often have to spend hours looking up move lists and learning combos. Soulcalibur is simpler. It does has depth, and you can become a much better player with practice. But you can start playing Soulcalibur with just about anyone (button-mashers are welcome) and have a good time without having to explain directional inputs for half an hour.

But just like so many of the weapons featured in Soulcalibur VI, this familiarity is double-edged.

Fighting in Soulcalibur VI has a great flow, and you only need a few buttons. You have horizontal attacks, vertical attacks, and kicks. You can perform simple combos just by repeatedly hitting horizontal or vertical strikes repeatedly. It’s easy to understand. And while every character has a different weapon and feel, they operate under the same basic frame. This means that you don’t have to focus so intently on mastering a single character. You can mess around with the entire roster, and as long as you have a decent grasp on the basics, you can still play well.

Aside from the basic attacks, you can push multiple buttons at once to do things like grab an opponent or pull off stronger (but slower) moves. And since Soulcalibur is a 3D fighter, positioning is important. You can sidestep attacks and even manipulate your opponent to a level’s edge and beat them with a ring-out. 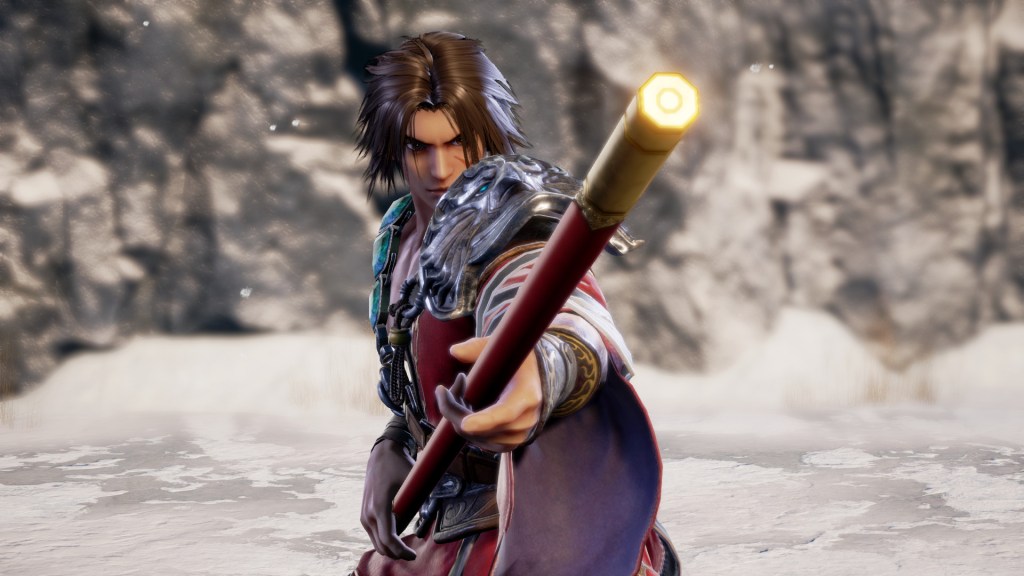 Above: He fights for his friends.

Fighting games are inherently a multiplayer affair, but Soulcalibur VI gives solo players plenty to do. Libra of Soul Mode has you making your own character and exploring a world map to move along the narrative and fight enemies, all while leveling up thanks to some basic RPG mechanics. It’s similar to past Soulcalibur features like Soulcalibur 2’s Weapon Master Mode.

Soul Chronicle Mode gives story content for each character on the roster, again with fights peppered between all the dialogue. The narrative presents itself as more a visual novel than a series of cutscenes, like you’ve seen in fighting games like Injustice. But these modes have a lot of story, and it’s fun for fans of the franchise to experience so much lore about these characters.

Arcade Mode is a bit disappointing. You fight against a series of computer-controlled enemies, but you don’t have any story content here. Not even an introduction or ending for your character. You don’t even fight a special boss for the final battle. Arcade mode is lacking, but Soul Chronicle Mode does fill that need for character-specific stories. 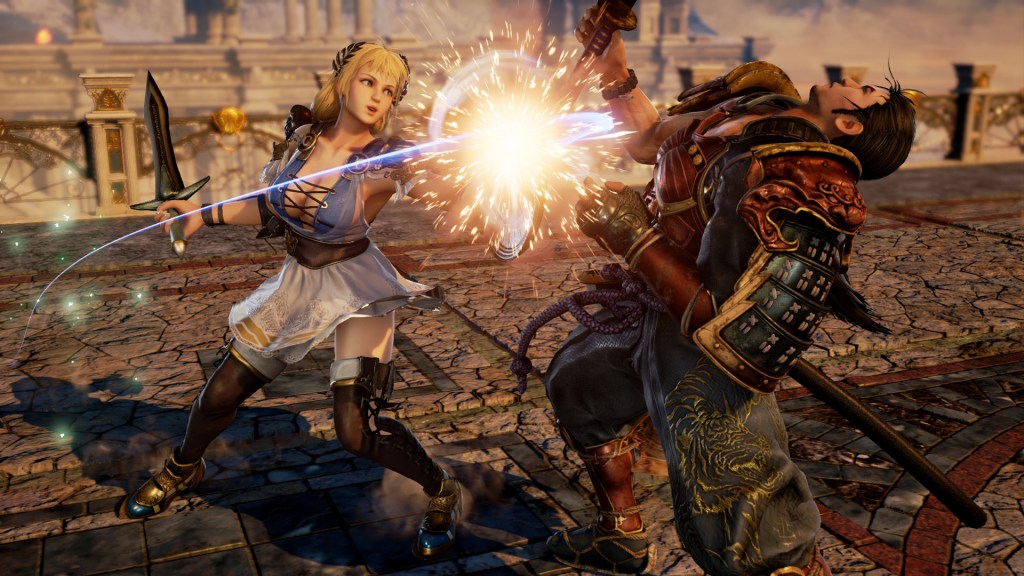 The last entry in the series, Soulcalibur V, took the series a generation into the future and focused on a lot of new characters. Today, I couldn’t tell you any of their names. Soulcalibur VI takes the opposite route. It’s a retelling of the first Soulcalibur, complete with most of the original cast and only a few newcomers.

Soulcalibur is famous for adding guest characters like The Legend of Zelda’s Link or Star Wars’ Darth Vader. Soulcalibur VI gives us Geralt, the hero of The Witcher franchise.

Geralt is a great fit for Soulcalibur. The Witcher is also a medieval fantasy series, and Geralt’s use of swords and magic blends in seamlessly with the rest of the cast. Above: Geralt brings the heat.

It’s common for fighting games to sell downloadable characters, but it sucks to see one offered the same day as the game launches. Tira is an interesting character who fights with a circular blade, but you need to pay extra to unlock her. It feels icky to have finished content like this not be a part of main game.

I mentioned before how Soulcalibur VI can feel nostalgic, but that’s also a problem. In a lot of ways, this game doesn’t feel all that different from what I played almost 20 years ago. Sure, what I played 20 years ago was great, but I wonder if more couldn’t be done to make the series feel fresh.

The one big addition to combat is the Reversal Edge system, a move that can counter an enemy attack and then start a sort of paper-scissors-rock game. Basically, you each push a random button and then see who lands an attack. It’s not a negative addition, but it’s also not adding much. 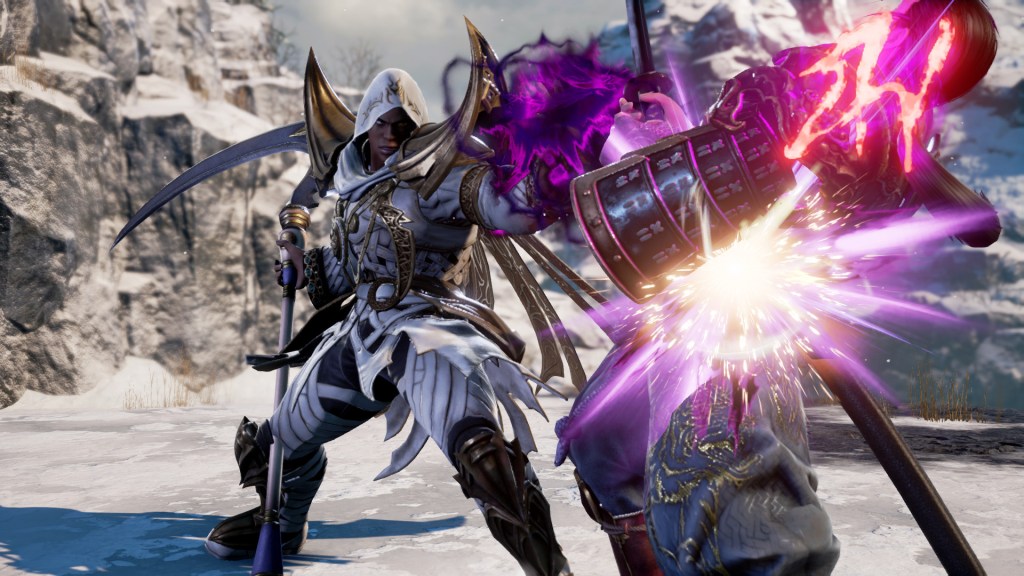 Above: The cast has a varied arsenal of weapons.

If you were ever a fan of the series, Soulcalibur VI will feel familiar and fun. And even if you’re newer to the franchise, the relative simplicity of Soulcalibur’s mechanics will make it easy to pick up and play.

Despite going back to the beginning, Soulcalibur VI isn’t a reboot. It doesn’t add any substantial mechanical changes. If I was a more cynical and lazy person, I could have written this review in one sentence: Yup, it’s Soulcalibur.

But I also happen to like Soulcalibur, so I won’t complain too much.

Soulcalibur VI releases on October 19 for PlayStation 4, Xbox One, and PC. Bandai Namco sent us a code for the Xbox One version for this review.