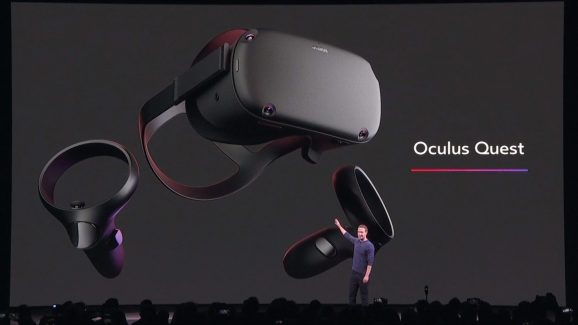 The Oculus Quest sits behind the Touch controllers.

Though 2016 was once described as the “year of VR” because that’s when consumer headsets became available, 2019 will be the year virtual reality actually goes mainstream — at least, that’s the prediction of Nielsen-owned SuperData Research, which today released its XR Market Update for 2018’s third quarter 2018. But by 2021, the firm expects augmented reality software to generate more revenue than VR software for the first time, an optimistic outlook for the ever-nascent AR market.

According to SuperData, 2019 is going to be a “make-or-break” year for the VR industry, but VR is continuing to gain momentum as 2018 comes to an end. Increased sales of VR software are projected to bring the VR market’s total haul to $3.3 billion for the year, up from $2.8 billion in 2017, with much stronger hardware and software sales contributing to a $6.9 billion forecast for 2019.

The unexpected reason: Oculus Quest. “Previous iterations of our report have tracked the market as it has gained momentum,” explained SuperData’s XR head Stephanie Llamas, “and we believe the launch of Oculus Quest will be a major force in pushing it over the tipping point into the mainstream.”

SuperData expects that the Oculus Quest will be a “defining moment for the XR space,” such that the standalone headset will outsell the PC-tethered Rift by a factor of 3 to 1 in its launch year — over 1.3 million units in 2019 alone. If that’s correct, the $399 device will help drive up average VR headset selling prices, as well as moving additional software.

Quest’s rise will be offset by forecasted declines in shipments of most other VR headsets, SuperData says. It believes that Oculus’ Rift, Sony’s PlayStation VR, and Samsung’s Gear VR will each see serious unit drops in 2019, with small boosts for Oculus Go and HTC’s Vive. However, sales of HTC’s standalone Focus — a potential challenger to Quest — will jump three times current levels, SuperData expects.

Also noteworthy is the anticipated growth of mobile AR over the next few years, in large part due to the steady growth of Apple’s and Google’s dueling AR platforms. SuperData says that developers are clearly turning their attention to mobile AR offerings. Though the analytics firm’s tally of over 3,000 supported apps suggests growth of only 1,000 apps since the beginning of this year, it believes that over 117 million unique people are using ARKit and ARCore apps, roughly 87 percent on Apple’s platform.

Revenues from AR will overtake VR in 2021, SuperData expects, as continued increases in enterprise AR software combine with growing demand for consumer AR software — and radically increased availability of consumer AR headsets. Microsoft and Magic Leap have already said that they’re working towards consumer versions of their current-generation AR products, and Apple is expected to enter the AR headset market in or around 2020, as well.