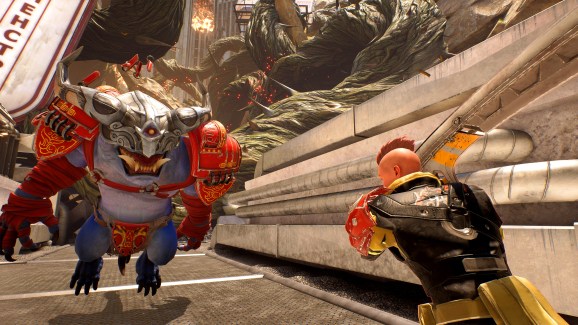 Gabe Amatangelo loves wild conspiracy theories, especially ones that involve ancient monuments around the world. The QC Games cofounder and chief creative officer is so devoted to them that he and his wife got married inside of Stonehenge.

It’s that kind of passion that fueled the creation of Breach, a free-to-play action role-playing game coming to PC on Steam Early Access later this year. The story of Breach involves two different versions of Earth — the one we live in and another filled with creatures from popular mythology — trying to merge after the magical barrier that previously separated them collapses.

As a result, people around the world (like your customized character) are gaining magical abilities, and it’s up to you and a secret society of warriors to repel the monstrosities that are crossing over.

Breach emphasizes cooperative play: you can tackle the objective-based missions with up to three other people online (though you can play solo with AI teammates). Your character’s class determines their combat style. If you’re a fan of Devil May Cry, the Auros Gladiator’s air combo attacks might feel familiar to you. But if you prefer someone with more range, then the Gunslinger or Sniper might be a better fit. With 24 classes at launch (and more to come in future updates), the developer hopes to provide a wide variety of play styles — Amatangelo likes to call Breach the “Super Smash Bros. of RPG classes.”

But if you ever get tired of being the hero, you can also play against other people as the Veil Demon, which comes with its own classes. As the big bad guy, your goal is to hinder players by setting up magical traps and taking control of enemies.

With so many options, Breach represents a new type of action-RPG, one that can’t be neatly compared to others in the genre. Creating new experiences like that is one of the reasons why Amatangelo, president and CEO Dallas Dickinson, and the other cofounders left EA’s BioWare Austin to form QC Games in 2015.

“We got some investors to start up a mid-size company, and we were interested in creating a new type of experience, a new type of game as opposed to doing something that already exists. … And that was the impetus for most of us jumping ship from the cushy jobs at EA, to try to take a risk on something and just wanting to do something new and different,” said Amatangelo. 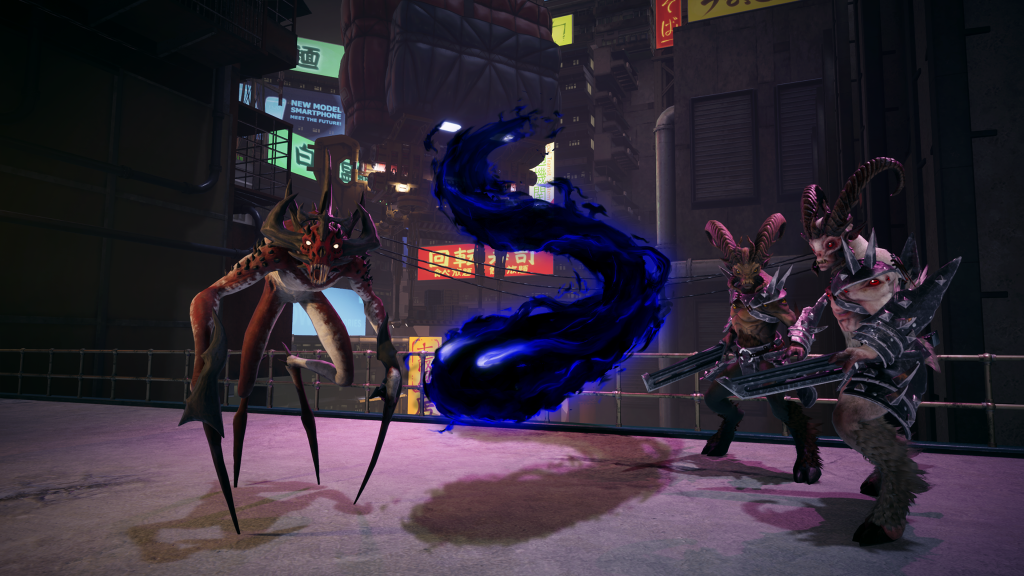 In some ways, Breach is a distillation of concepts and mechanics from RPGs and massively multiplayer online games. And that’s not too surprising given the developers’ history at BioWare, where they worked on the MMO Star Wars: The Old Republic, Dragon Age: Inquisition, and the cancelled online action game Shadow Realms. While some aspects of the latter (which also featured teams going up against a powerful player-controlled enemy) live on in Breach, QC Games created an entirely different premise for it.

According to Amatangelo, the inspiration for the story came from a desire to avoid fantasy and sci-fi settings, which are commonly seen at both the triple-A and indie level. But mostly, the developer attributes a certain History Channel TV show (and subject of popular memes) for helping him come up with the idea.

“To stand out, I just wanted to do something that was a little bit different, but also allowed you to have powers, to make classes. Honestly, I was just watching Ancient Aliens. … I just like ancient history conspiracy theory stuff. It was just like, ‘Let’s do something with that, let’s play off of things that are scientific and then let our imagination go from there,’” he said.

That unique combination of history, conspiracy theory, and mythology extends to the character art as well. One phrase that Amatangelo likes to tell his coworkers is that Breach is “gamerpunk meets History Channel.” By gamerpunk, he means the colorful hoodies, jackets, accessories, and other outfits that fans like to wear at gaming conventions. When you combine that with influences from different cultures around the world, you get a style that looks less like World of Warcraft and more like an edgier Final Fantasy. 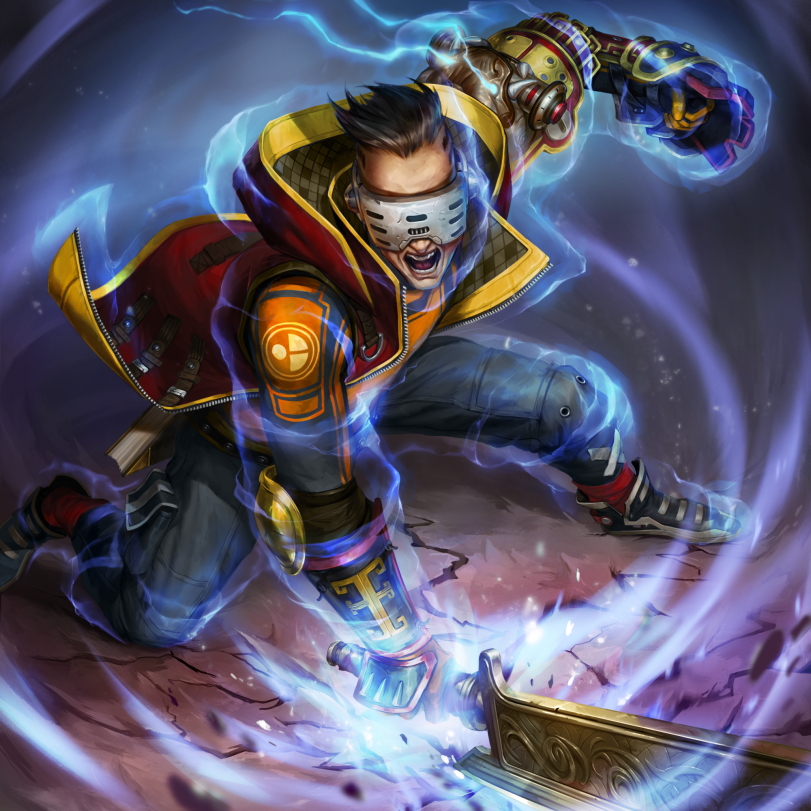 “It’s not like old-school British punk — it’s modern punk, if you will. And it’s not cyberpunk, right? It’s modern gamerpunk with mythology and some combat-ready aspects to it, too,” said Amatangelo.

The environments featured in Breach are also a blend of modern and ancient cultures. The Library of Alexandria in Egypt, for instance, is the hub world for the heroes, the place you return to after every mission to meet up with other players or to practice with your newly acquired classes. You’ll also see a twisted version of Tokyo, which is now half-metropolis, half-haunted forest and filled with nasty creatures from Japanese folk tales.

Surviving as a F2P game

These days, players have so many time-sucking multiplayer games vying for their attention that it can be difficult for non-triple-A studios to compete and find a community to sustain their game. However, after working for years at EA, the founders of QC Games are fully aware of the pitfalls that come with development.

That’s partly why they chose to use the free-to-play model for Breach, so anyone could try it for themselves. If players end up liking the game, the company hopes that they’ll tell their other friends about it, too.

“I think if players enjoy a game, they’re going to support it. We see this in things like Path of Exile and stuff like that. That’s the model we believe in,” said Amatangelo. “It’s like, ‘Hey, we’re gonna bust our ass to put something out there. And if players enjoy it, they’re going to support it.’ … So yeah, it’s a risk we’re taking because this is the game that we’re passionate about.

“And if players respond, QC Games stays alive. If not, then eh, we gave it a shot. [Laughs]” 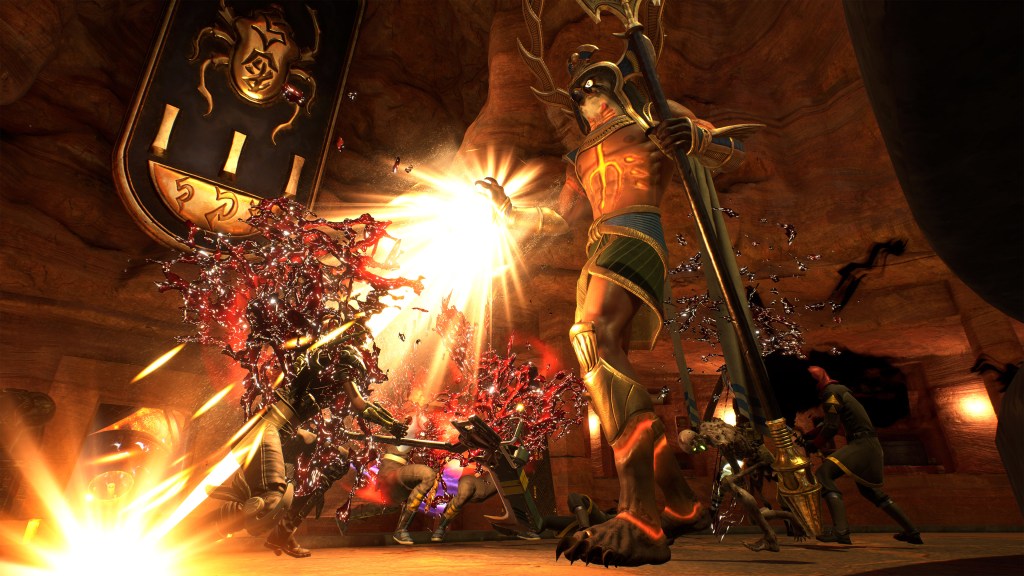 Once people get their hands on the game, QC Games will track their feedback to see what kind of content they want to see more of, whether it’s new story missions, more custom modes, other co-op features, etc. Like other live-service games, the developers plan on evolving Breach over time with the help of their players.

“The thing is we’ve architected everything to be flexible and so we’re going to put this out there, see what players gravitate toward. And one of the things we’re definitely gonna lean into, especially toward the beginning, is just all kinds of classes to play,” said Amatangelo.

The studio sees Breach as an opportunity to redefine what an action-RPG can be, to do what Blizzard did with the original Diablo or what BioWare accomplished with Baldur’s Gate in the ‘90s — offer something that players haven’t seen before. It’s also somewhat of a rebirth for Amatangelo and the other veteran developers, who are now free to make the games they want to make without worrying about corporate portfolios and shareholders’ interests.

And they happened to choose the perfect name to represent that journey: the initials “QC” stands for Quetzalcoatl, the phoenix-like god from Mesoamerican legends.

For those interested in participating in the Technical Alpha phase of Breach, please register at PlayBreach.com.