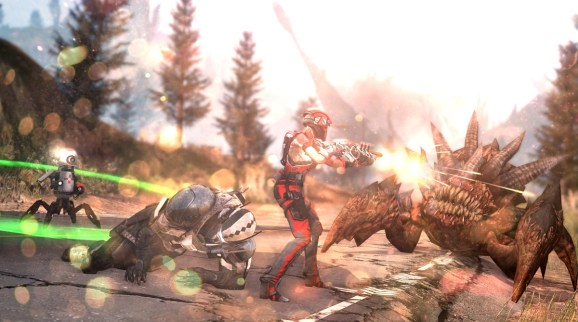 Defiance 2050 has those same crabby monsters.

Trion Worlds has been sold. The California-based game-design studio specializes in massively multiplayer online games. According to a post Trion director of community relations Linda “Brasse” Carlson made on a Discord message board, many employees (including herself) are leaving the company today.

Carlson’s Discord message notes that Gamigo is the buyer, but Trion has not specified who bought it and would not to confirm to GamesBeat that it is Gamigo. Gamigo is a European MMO publisher that focuses on free-to-play games.

“While many of the names and faces you’ve come to know in our studios will remain on through this transition, others will not be making the journey,” Trion noted in a statement sent to GamesBeat. “To those who are leaving us, we are forever grateful for your incredible work and contributions over the years. We’d like to assure our communities that the games will continue on in capable hands moving forward, as everyone involved is aiming to make this transition as smooth as possible for you. We will have more information to reveal as soon as we possibly can.”

Lars Buttler  and Might and Magic creator Jon Van Caneghem, who also founded New World Computing and worked at MMO studio NCSoft, started Trion in 2006. Trion developed MMOs such as 2011’s Rift and 2013’s Defiance. In 2016, the studio released Atlas Reactor, a multiplayer turn-based strategy game. An updated version of Defiance came out this year on July 10 for PlayStation 4, Xbox One, and PC.

Shortly after that launch, Trion issued a round a layoffs. That move impacted 15 positions. Before that, in June, Trion acquired the assets from defunct Marvel Heroes developer Gazillion. Trion’s sale follows CCP Games’ acquisition. That developer sold to Pearl Abyss for $425 million in September.