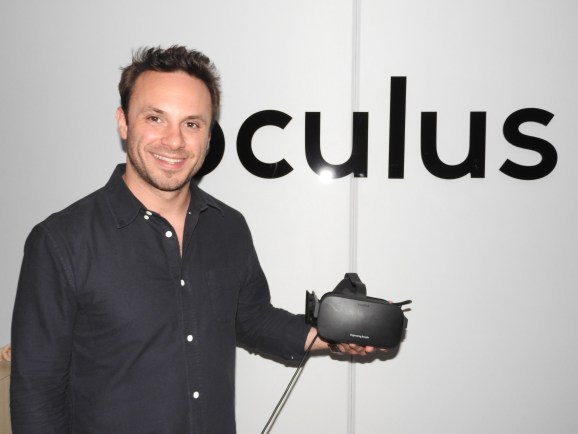 Brendan Iribe showing off the Oculus Rift at E3 2015.

It’s the start of a new week, which means that it’s time for another noteworthy executive departure at Facebook — this time, within its virtual and augmented reality unit. Without providing further details, Oculus cofounder Brendan Iribe announced today that he’s departing the company.

Iribe was with Oculus since its founding in July 2012, and told his Facebook followers that he’ll be taking his “first real break” in over 20 years — an opportunity to “recharge, reflect and be creative” in preparation for his next chapter. Whatever that may be, his parting words were more wistful and respectful than abrupt or competitive, notably referring to Oculus as “we” despite his departure.

“Now is when we get to pioneer the foundation of the next great computing platform and medium,” said Iribe, “this is our time to be pushing the state-of-the-art onward and upward. Every part of VR and AR needs to improve, especially the hardware and core technology, and Oculus has the best team in the world to do that. Although we’re still far from delivering the magical smart glasses we all dream about, now they are nearly within our reach.”

Iribe’s exit comes a year and a half after Facebook split with Palmer Luckey, the most visible of Oculus’ founders. Luckey and Iribe raised $2.4 million on Kickstarter to develop the original Rift headset, with Iribe serving as CEO to technologist Luckey. Facebook acquired the startup for around $2 billion in 2014, and Iribe subsequently receded somewhat, exiting Oculus’s CEO role in 2016 as others became more prominent faces of the VR-focused unit.

The past year hasn’t been great for Facebook executives, as the social networking company has seen multiple high-level leaders and founders depart its upper ranks. Unlike the recent departures of Instagram’s cofounders Kevin Systrom and Mike Krieger, however, Facebook appeared to be prepared for today’s announcement. The company says that remaining Oculus cofounder Nate Mitchell will continue in his role at the company, leading Oculus’ Rift and PC development team.