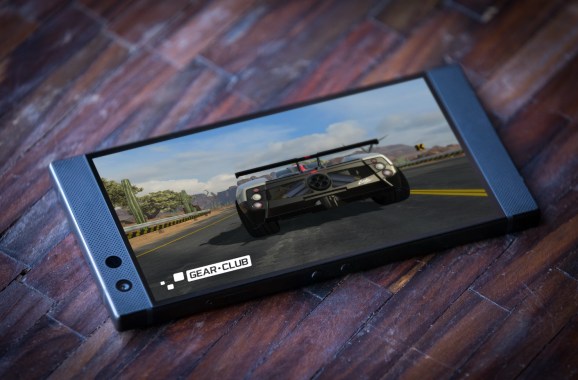 I liked the Razer Phone. I used it for months and came away from it impressed … for a first effort from a company that’s never made a phone before. But the device had some glaring issues that prevented me from recommending it to most people. Now, Razer is launching the Razer Phone 2. This time, it is leaning away from the “gaming” designator and instead calling it a “flagship phone.” And if all of the changes and improvements work out, I think it has what it takes to compete with any other Android phone.

The Razer Phone 2 is $800. It ships October 22. It still features a top-of-the-line Qualcomm Snapdragon 845 processor, a huge 4,000 mAh battery, and a 120Hz “UltraMotion” display. It also has 8GB RAM and the excellent stereo front-facing speakers. Those are all features that made the first phone great for gaming and other multimedia content. But the Razer Phone 2 adds features that should improve it for daily use.

Razer had to include a better camera with the Razer Phone 2. And I don’t just mean the usual next-gen upgrade you get from every smartphone manufacturer. Razer needed to do something different because the first camera was so depressing to use. And it did. The company has confirmed that it redid its camera from scratch.

Instead of Samsung sensors, the Razer Phone 2 now has two Sony sensors on the back. One has optical image stabilization for standard pictures. The other is a telephoto lens without stabilization. The early results I’ve seen look nothing like the muddy, blurry results you’d get from the first device. I still don’t know if it matches up against Google’s Pixel line or Apples iPhones, but even if it can get close, that would make this a viable daily handset.

Wireless charging and glass back

The first Razer Phone had an all-metal body, which made it sturdy. But it also eliminated the potential for wireless charging. The followup is using a shiny glass back now, and this means you can get a charge just by setting the device down on a compatible power mat. Razer is selling its own, but it should work with any existing Qi inductive charger.

One of the strangest omissions from the first Razer Phone was IP67-rated dust-and-water resistance (IP67 is an industry standard set by the U.S. Army to determine the ruggedness of a device). That’s the standard that every other major flagship phone had in 2017, and now Razer is matching that in 2018. This means you can cover the phone with water, and it should continue to function as normal. Finally, you can enjoy that 120Hz phone in the shower.

Now, all that said, I get why the first phone didn’t have this. Those big front-facing speakers seem like a challenge to make IP67 compliant. The Phone 2 still has those speakers, and I’ll have to test to see if they lose any of their oomph this time around. That’s sometimes unavoidable when you cover a speaker with a water-proof bladder.

Razer is promising that the Phone 2 will have a 50 percent-brighter display. The first phone was rather dim compared to other devices — although this was only a problem with direct sunlight. Still, it’s nice to see Razer address this.

But the brighter screen should also mean better performance with HDR content, which Razer Phone 2 still supports. And the company made other improvements to the display to give more accurate color reproduction and deeper black levels as well.

Finally, how could Razer ever call this a gaming phone when its first device did not have its Chroma RGB LED lighting? Well, the company has now addressed this shame. Razer Phone 2 has a light-up logo on the back that you can control with built-in software.

OK. This a silly and absurd addition, but Razer is building some functionality into it. The logo will light up different colors to let you know you’re getting certain notifications or a call, for example. You can customize those however you want or turn it off completely.

Razer Phone 2 once again does not have a headphone jack. That’s frustrating. Razer sells a lot of 3.5mm gaming headsets, but those won’t work without a dongle. And the dongle that Razer included with the original phone was awful. After almost no use, it would lose its grip and begin sliding out of the USB-C port on the phone. I bought an extra dongle, and the same thing happened as well. I then tried getting some third-party dongles, but those did not work at all because they did not have the built in digital-to-analog converter that you need to get audio from the device.

So I’m still worried about headphone audio with the Razer Phone 2. Sure, Bluetooth will work, but I resent phones that want me to always have headphones charged and ready to go whenever I need them. Sometimes I’ll forget, and then I will have no way to listen to music, a movie, or a podcast in private.

Without including a headphone jack, the biggest improvement Razer could make is ensuring the USB-C port is sturdy and durable enough to maintain a strong connection with a headphone dongle. Headphones are naturally going to pull and tug on the dongle and the port. One of the reasons headphone jacks are so great is because they can withstand that kind of treatment. But where the 3.5mm standard is long and skinny, USB-C is short and stubby. And those aren’t great features for ensuring a long-term connection between a connector and a port.

I hope Razer has figured it out.