Razer unveiled its second-generation Razer Phone 2 earlier this month in a bid to beat Apple in providing the best smartphone for gamers.

The $800 device has a 120-hertz display and an 8-millisecond response time, making it faster than Apple’s most-competitive iPhone XS and XS Max phones when it comes to refreshing the screen for fast gameplay. I’ve had the Razer Phone 2 for 11 days and have also played with the iPhone XS Max.

Razer says its goal was to take feedback and make the Razer Phone 2’s cameras better than the first phone’s. And it has done that, and delivered a 30 percent performance improvement over the $700 original Razer Phone, which came out a year ago.

Min-Liang Tan, CEO of Razer, said the phone is designed to give Razer’s 50 million gamers — who have bought hardcore gaming laptops, mice, keyboards and other devices — a “console quality” experience on a gaming smartphone. 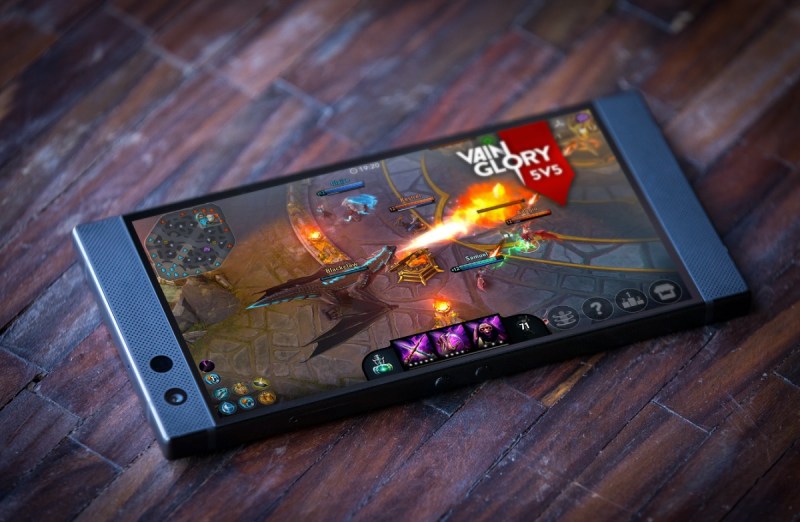 Above: You can play games like Vainglory on the Razer Phone 2.

You can use the Razer Phone 2 device as a phone, a YouTube or Netflix viewer, or a web surfing device. But games are what make or break its purpose in your life. After all, cheaper phones can do all of those things too.

I’ve had the device for just 11 days, and so I haven’t played anything very intensely yet. It can run pretty action games like Shadow Fight 3, Nekki’s sword-fighting game, particularly well. While the screen refreshes twice as fast as the Apple devices, I can’t say I noticed any difference between Shadow Fight 3 on the iPhone XS Max and the Razer Phone 2. Given a $300 difference in prices for the devices, I’d say that’s a win for Razer.

I also played the Gear Club racing game and the mobile version of PlayerUnknown’s Battlegrounds on the Razer Phone 2. The racing game looked amazing, and it didn’t stutter at all as I went around corners and pushed the pedal to the floor. It was no surprise that Razer partnered with PUBG Corp., livestreaming the Pro-Am PUBG Mobile tournament, at its reveal event.

PUBG, meanwhile, ran smoothly enough for me to shoot a guy who had the misfortune of landing next to me. I had a gun and he didn’t. But the point is that it looked good. I could hear if anyone was behind me, perhaps thanks to the surround-sound performance, though I can’t say for sure. 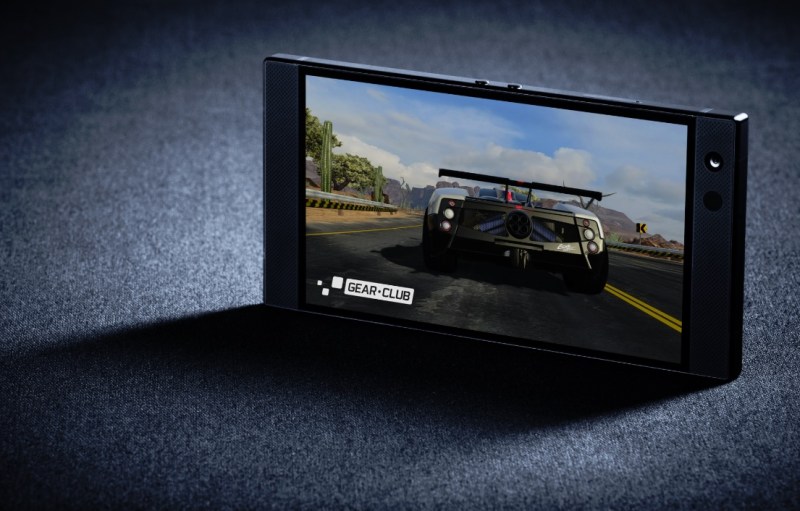 Above: Gear Club on the Razer Phone 2.

The 2560 x 1440 resolution screen is fast, with no tearing or lagging. Both Razer and the new iPhones have a 120-hertz display when it comes to touch detection. But the screen refresh on the new Apple devices is 60 hertz, while the Razer device has a 120-hertz refresh rate.

The Razer Phone 2 has a 5.72-inch UltraMotion IGZO LCD screen, which is 50 percent brighter (at about 645 NITS) and it has a wider color gamut.

The device using a 2.8-gigahertz, eight-core Snapdragon 845 processor from Qualcomm and a Qualcomm Adreno 630 graphics processing unit (GPU). It has 20 percent to 30 percent better performance than the previous 835-based original Razer phone. The Apple A12 Bionic chip in the iPhone XR has six cores, and the phone has lower resolution at 828 x 1792 pixels.

Razer claims the Razer Phone 2 has the No. 1 benchmark score from Geekbench, Basemark GPU, and 3Dmark Slingshot. That’s entirely possible, as the top-ranked chip in performance is the Snapdragon 845.

Razer uses its proprietary vapor chamber cooling, a trick which it took from its PC gaming machines. The liquid-based vapor chamber absorbs the heat and spreads it across the entire surface of the phone. 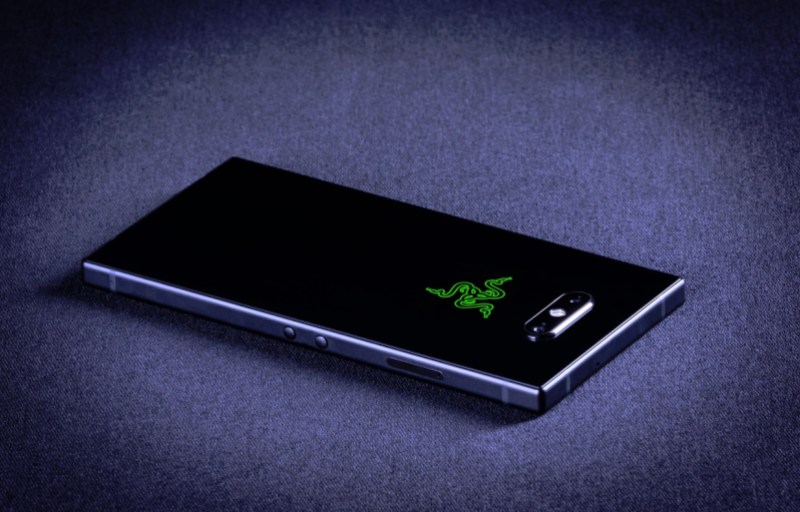 Above: The logo on the back of the Razer Phone 2 now glows in Chroma colors.

The green Razer logo lights up on the back when it’s in use, as the phone can now handle Razer Chroma’s 16.8 million color lighting options.

The sound is what you’d expect from a gamer phone 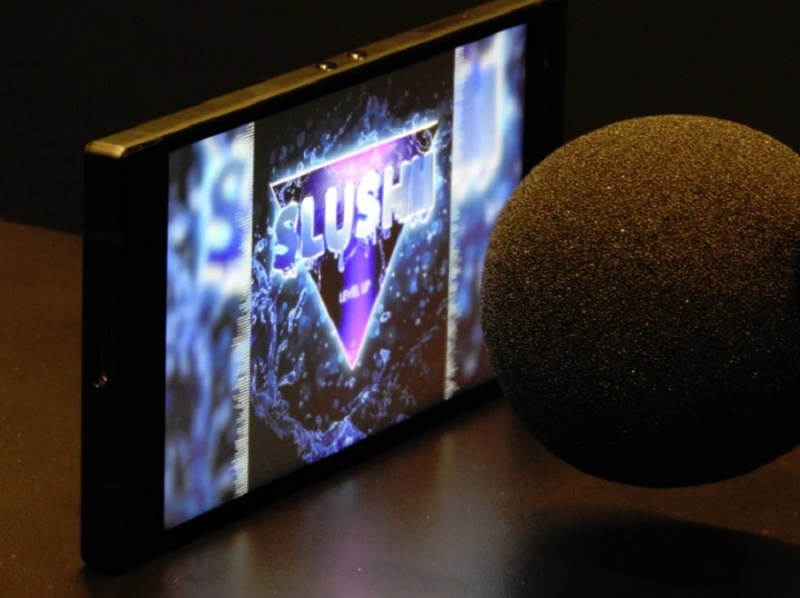 Above: You can blast sounds from two front speakers on the Razer Phone 2.

The phone’s speakers are Dolby Atmos certified. It can handle Dolby Digital 5.1 surround sound and Netflix HDR videos. I watched a scene from Black Panther on the smartphone, and it felt like I was watching on a much bigger screen. The sound is loud and clear, blasting out of the front dual stereo speakers and 24-bit DAC. I have no complaints about the Razer Phone 2’s sound, except it can be too loud.

At $800, the Razer Phone 2 is a pretty good bargain as flagship smartphones go.

Wireless charging is now enabled on the Razer Phone 2 with its new glass back. Razer has announced its new wireless charger with Chroma. If you prefer plugging in a USB-C cable, Qualcomm QuickCharge 4+ allows users to charge the phone from a flat battery to 50 percent charge within 30 minutes.

The device has a 4,000 milliamp battery, giving it a day-long battery life. Where its predecessor was benchmarked for 10 hours of battery life at a screen refresh rate setting of 90 hertz, the Razer Phone 2 is optimized to also last 10 hours at a higher 120 hertz.

Personalization lets you express yourself 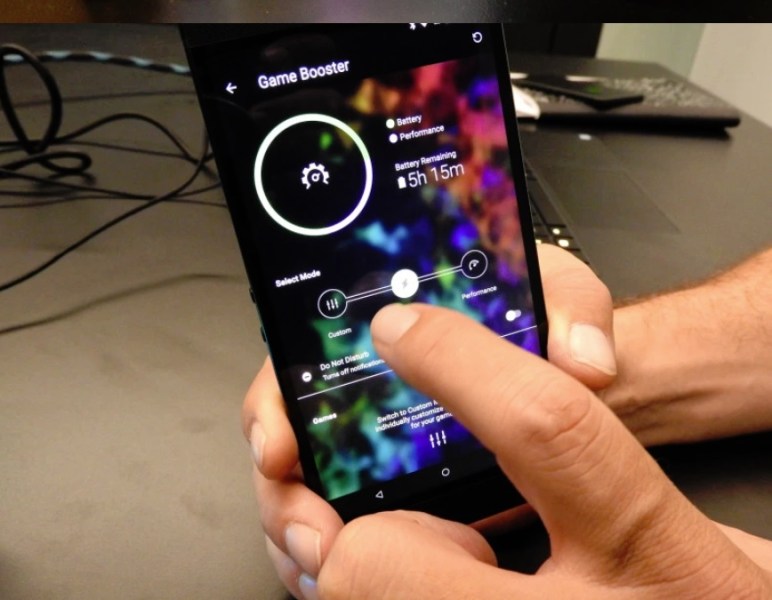 Above: Game Booster can suggest settings for games on your Razer Phone 2.

You can personalize and customize the Razer Phone 2, adding a theme for Tekken’s Christie or a favorite Vainglory character if you so wish. Razer isn’t charging anything extra for these “skins” for your mobile device.

You can also use a feature called Game Booster (within Razer’s Cortex mobile app) to optimize the phone for specific games, trading off performance and battery life. You can create a custom profile, go into a power-saving mode, or use a performance mode.

The camera isn’t quite as good as what Apple offers

Above: The Razer Phone 2 image is on the left. The iPhone XS Max is on the right.

Razer officials acknowledged they needed to work on their camera quality. The new phone has a different camera, in response to feedback from fans who weren’t entirely pleased with the first one. Even so, the Razer Phone 2’s rear-facing camera doesn’t shoot pictures as well as the iPhone XS Max.

In far away pictures, like the one above, it’s hard to tell any difference. But with close-ups of people, I felt that the iPhone camera took superior pictures.

Razer switched from Samsung to Sony IMX sensors got get better light sensitivity, lower noise, and high-contrast images. The autofocus and white balance are more refined, resulting in better overall image quality. It has optical image stabilization and a better optical architecture. It also performs better with HDR, pulling details out of both well-lit and shadowy parts of the same image.

This device has a different placement for the back-facing 12-megapixel wide-angle dual cameras, which are in the center of the phone instead of the top. The changes in the camera required more space, necessitating the new placement for the camera. Each of the two cameras on the back are further apart, giving the cameras better depth perception. The rear cameras also have a 12 megapixel telephoto lens with 2x zoom. The front-facing camera is 8 megapixels and it supports full HD livestreaming.

While it all adds up to an improvement, I think that Apple can still beat Razer here.

It does not have face unlock or 3D face recognition, while Apple’s new X series phones come with FaceID, which is an easy way to unlock your phone. You’re also going to have to be careful about security risks for things such as sideloading (important for games like Fortnite on Android), as Android hacks are not that enjoyable and frequent. 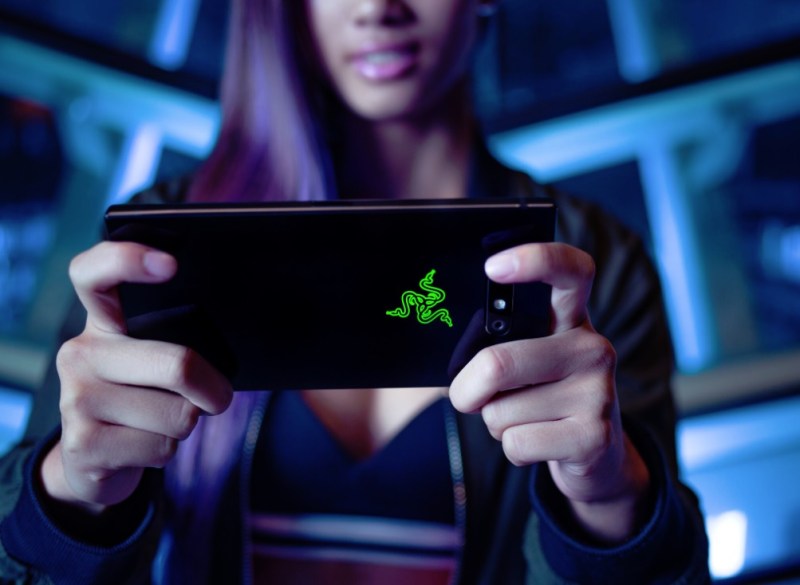 Above: Razer Phone 2 is a gamer lifestyle product.

I believe that Razer has built a phone that is tuned for gaming, and it can match or beat the experience of gaming on Apple’s best phones. But there are some trade-offs that Razer makes on things such as camera quality, and perhaps that’s why it can’t command as high a price as Apple can.

But if you are looking for a smartphone to support your gaming obsession while on the run, it’s hard to think of a better device than the Razer Phone 2.

Disclosure: Razer provided me with a Razer Phone 2 for the purposes of this review.