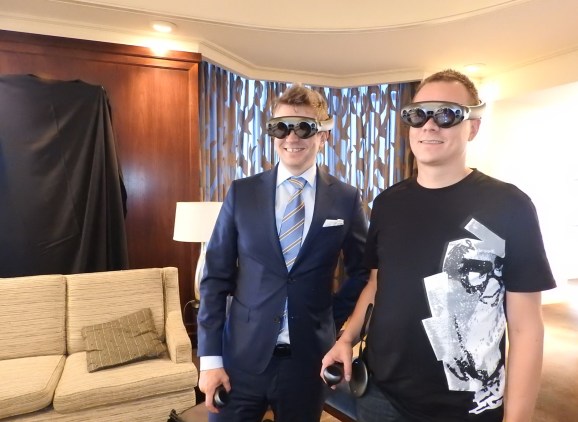 In a few short years, the Stockholm-based Resolution Games has inspired confidence that it knows what it’s doing in the fledgling markets of AR and VR, which could take years to develop. The studio has had hit games such as Bait! for both VR and AR. It also just created Rovio’s Angry Birds FPS: First Person Slingshot for the Magic Leap One Creator Edition AR glasses.

MizMaa Ventures led the round, and with new investment from venture capital firms GP Bullhound and Fly Foreverr. Unity cofounder David Helgason also funded this. Prior round investors GV, Partech, Bonnier Ventures, Creandum and Sisu Game Ventures also participated in the round.

Above: Resolution Games has taken its Bait! franchise into augmented reality.

“We’re very excited to have these high-caliber thought leaders join our team, and to see the continued support from our current investors,” said Tommy Palm, the CEO of Resolution Games, in a statement. “With this group behind us, we can work towards scaling and being better prepared to take advantage of the maturing market.”

Palm became famous as one of the leaders on Candy Crush Saga, which generated huge mobile game revenues for King, which was subsequently able to go public at a $6 billion value and then get acquired by Activision Blizzard. Palm has also tried to give back by starting a game accelerator, Stugan, that is helping Swedish game startups get off the ground.

With this latest infusion, the company’s total funding comes to $13.5 million, which will allow Resolution Games to further grow and expand its portfolio of intellectual property (IP) for both VR and AR. In their first three years, the studio produced Bait! and made other highly rated games.

“The Resolution Games team is taking the lead in innovation for VR and AR games. Their team’s background, market leadership position and ability to innovate in the space is unmatched. We are thrilled to be joining their team as they set out to establish even more standards for the VR and AR games markets,” said Catherine K.C. Leung, general partner of MizMaa Ventures, in a statement.

Resolution Games has 35 employees, and it is working on five games, including one AR game and four VR titles.