Electronic Arts has laid out the road map for Battlefield V‘s post-launch plans, which includes new maps and single-player content. It also reveals that the shooter’s battle royale mode is coming in March. All of this will be free for all players.

Battlefield V is coming out on November 20 for PlayStation 4, Xbox One, and PC. The post-launch additions should keep players engaged, and new features like the battle royale mode could also attract new fans, considering Fortnite is one of the most popular games around, and Activision’s Call of Duty is showing that last player standing works well for the blockbuster shooter behemoths, too.

But Battlefield V will be coming a bit late to battle royale compared to its major competitor. Call of Duty: Black Ops 4 launched on October 12 for the same platforms, and its battle royale mode, Blackout, has been available since day one. Every year, a Call of Duty game is a top-seller in the U.S., and Black Ops 4 is off to a strong. It’s likely that trend will continue. 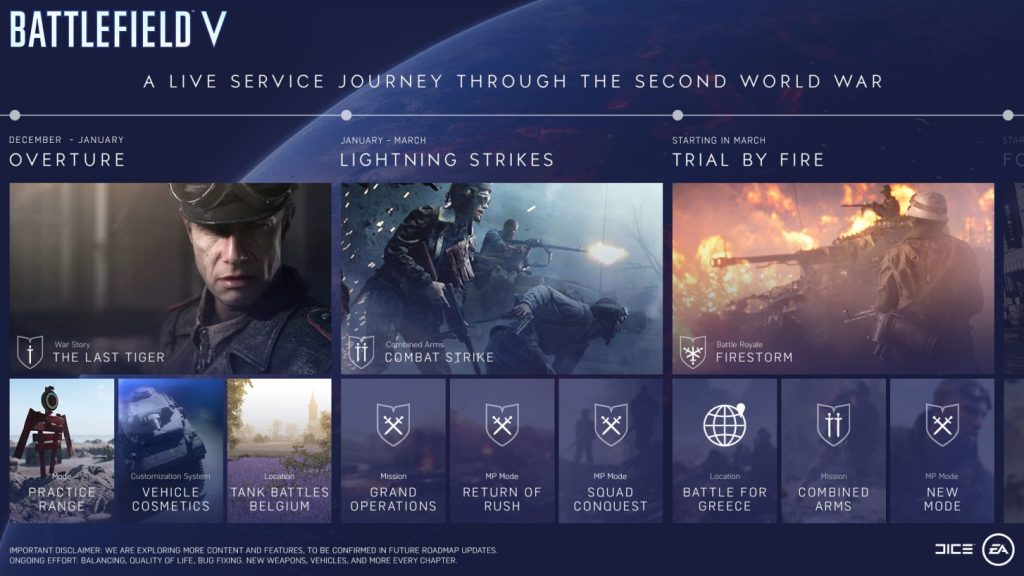 Battlefield V’s post-launch content is coming in three waves. The first starts in January with Overture, which will add a practice range mode and a new tank-themed map and single-player story. Lightning Strikes starts in January, and it will focus on vehicle and infantry warfare. It will also add Combined Forces, a three-player cooperative mode. The Trial by Fire chapter starts in March and adds the battle royale mode Firestorm. It will also add a new Greece map.

Electronic Arts and developer DICE’s last shooter, 2017’s Star Wars: Battlefront II, had players buying loot boxes with real money that included cosmetics items, upgrades, and new heroes/villains. The system saw heavy criticism from gamers for giving players who pay more money an in-game advantage, causing EA and DICE to rework the loot boxes. But the controversy had a negative impact on the game’s sales and even sparked some governments to take action against video game loot boxes. Battlefield V does not have loot boxes.