Two of the best Castlevania games ever are going to be available in a single bundle when Castlevania Requiem launches for the PlayStation 4 on October 26. Rondo of Blood and Symphony of the Night are both still amazing 2D action-platformers. But aside from the games, the collection is about as bare as a skeleton.

When Mega Man Legacy Collection came out, I criticized that package for only having the bare amount of extras. You know, things like picture galleries and a music players. Those offerings now look generous compared to Castlevania Requiem. When you start Requiem, you can choose between two the games and an options menu.

And we really need to talk about the game selection menu. It is … hmmm … it’s bad. When you scroll through the limited options, the text and game logos will actually overlap and stay that way. Even with so few actual selections, the menu still looks cluttered. 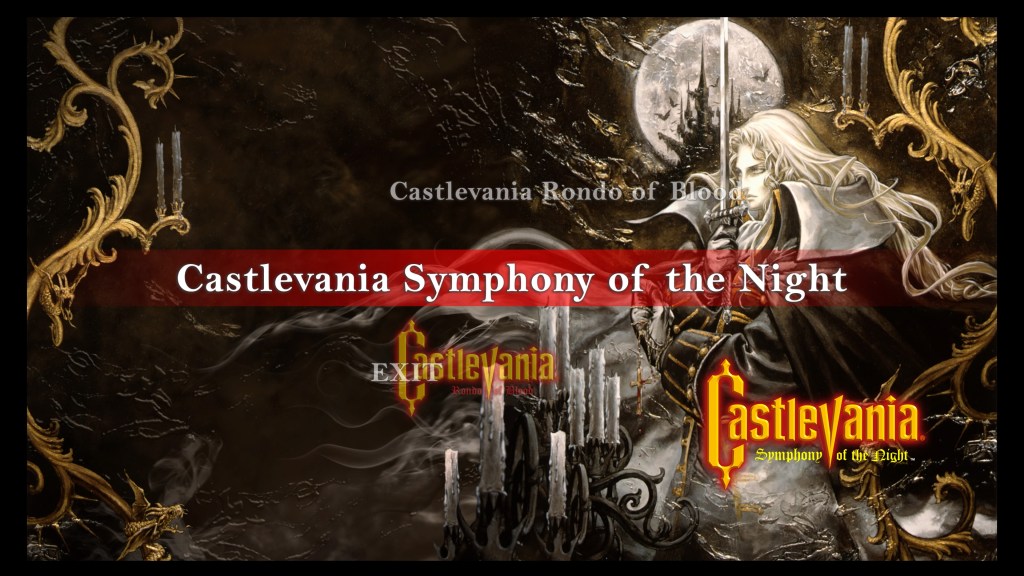 Above: How can you mess up something so simple?

The options I talked about don’t have much going on, either. You can choose to change the button mapping for Rondo of Blood (Symphony of the Night has that option in the actual game), or you can mess around with the screen’s size. You can also change the background art that can fill in those black edges (gotta love those old aspect ratios). You can also turn on a filter to add scanlines, if you desperately want the experience to look as aged as possible. Interlacing makes the screen flicker a bunch and seems to do little else. Smoothing makes the pixels look sloppy and blurry. Thankfully, these options are all off by default. 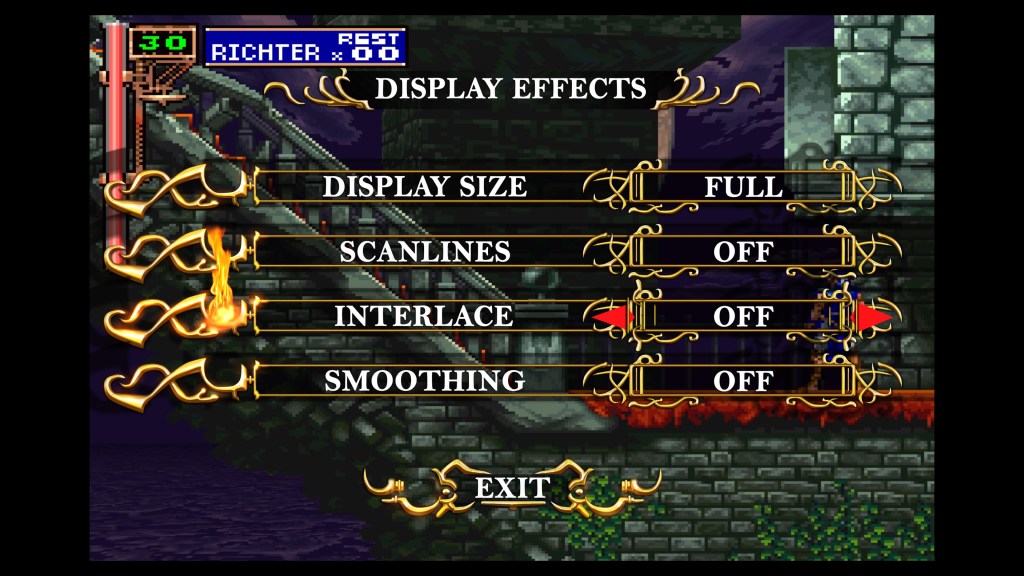 Above: Not much here.

Rondo of Blood and Symphony of the Night deserve a more attractive package that celebrates these classics. But Requiem still has the most important stuff: the two games. These versions are based on the ports both had for the PSP as part of Dracula X Chronicles, which came out in 2007.

Dracula X Chronicles was a remake of Rondo of Blood, but it also included the original version and Symphony of the Night as extras. Those were good ports, and they still work well on the PlayStation 4. The games are responsive and run well.

The only downside is that this version of Symphony of the Night has different voice acting. When Symphony first came out for the PlayStation in 1997, it had the kind of awful voice work we were used to getting in that era. And while it was bad, it was so campy that it became iconic. Few scenes in gaming are as memorable to me as the opening exchange between Richter Belmont and Dracula, which gave us gems like, “What is a man? A miserable little pile of secrets!” 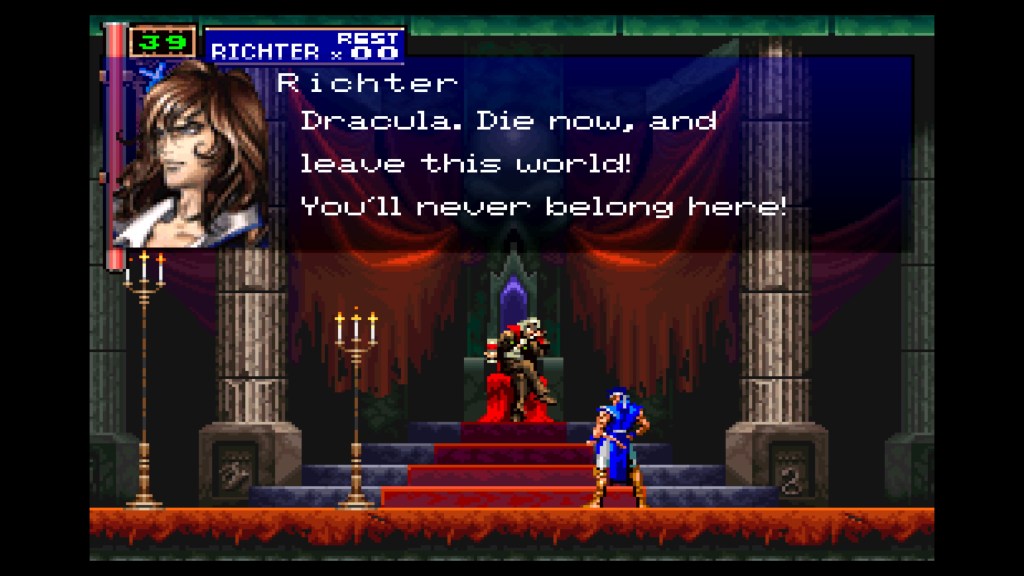 Above: Awww, that’s not how it goes!

The PSP port changed the voice actors and the dialogue. Oddly, the quality of the voice acting isn’t all that much better. It certainly doesn’t improve the experience. The change just robs us of classic lines. It’s distracting. Imagine watching The Terminator and Schwarzenegger says, “I’ll return shortly.”

But it isn’t that big of a deal. Symphony of the Night is great because it’s fun to explore Dracula’s castle while discovering new weapons, bosses, and abilities. Before it came out, games that were like Metroid were just called … well, games that are like Metroid. Symphony of the Night helped coin the Metroidvania term that we now call all games like this today. Even today, it’s still one of the best Metroidvanias you can play.

Rondo of Blood is also fantastic. It’s Symphony of the Night’s storyline and release predecessor, coming out in 1993 for the PC Engine CD system. It only released in Japan, so we didn’t get to play it in the U.S. until much later either via ROMs or Draclua X Chronicles. While Symphony of the Night evolved the series, Rondo of Blood is more faithful to the franchise’s linear roots. It plays a lot like the original Castlevania, it just looks a lot better. And as far as those traditional Castlevania games go, this is one of the best. 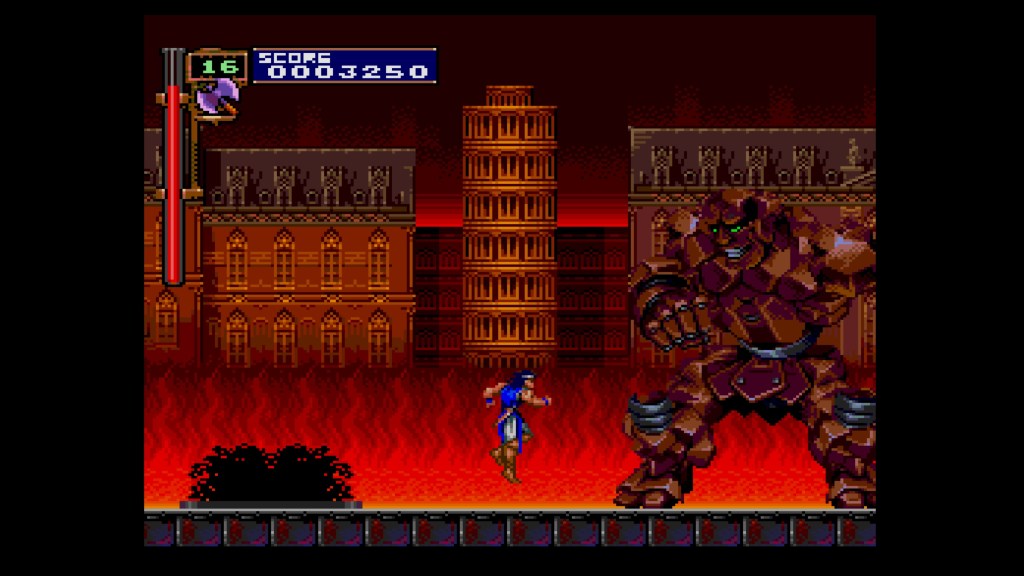 It’s disappointing that Castlevania Requiem isn’t a proper celebration of these gems. But Rondo of Blood and Symphony of the Night are so good that I’d recommend this collection anyway. Even when I was messing around with these games just to take screenshots for future stories, I ended up spending hours playing each. I kind of expected that for Rondo of Blood, since I haven’t played it since 2007, but I even got sucked back into Symphony of the Night. I had just played that one within the last couple of years on my Vita.

I love Castlevania, and these are two of the best games the franchise has ever produced.