Red Dead Redemption 2 is about as awesome and immersive as a video game can get, and that’s no hyperbole or surprise, as the game comes from Rockstar Games, which made masterpieces such as 2010’s Red Dead Redemption and 2013’s Grand Theft Auto V. I am confident that this mature-rated game will be one of the mega-hits of the holiday season, if not for years to come, and it will be a strong contender for Game of the Year.

I’m about halfway through the single-player story, which follows the misfortunes of the notorious outlaw gang led by Dutch Van der Linde and his lead enforcer, Arthur Morgan. I’m withholding final judgment and a review score until I finish the game, but I’ve savored the journey so far.

I’m already amazed at the breadth of the experience. I’ve completed 62 missions (I remember GTA V had 69 missions total), and I am only 51 percent done with the story. It is no exaggeration for Rockstar to call this an epic story of the American West. It’s about honor among thieves and loyalty in the last days of the outlaw era. It is set in a deep open world, but Rockstar leads you through it with a deft hand and a tightly controlled story.

Red Dead Redemption 2 offers so many things to do, but so far I have only dabbled in tasks such as exploration and hunting. I’m sticking to the main story, which is easy to follow because you are directed to each mission through a yellow color code on the overall map. 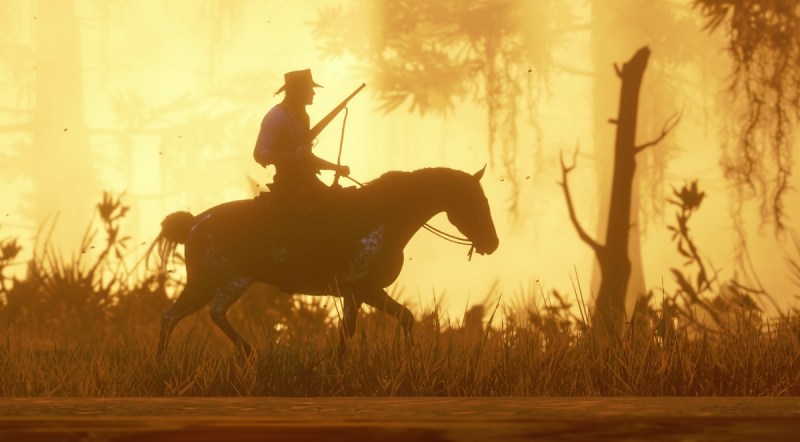 The tale begins with the gang in trouble in 1899, 10 years before the events of Red Dead Redemption. They are in full retreat from a bank robbery gone bad in the town of Blackwater. They have fled into the mountains and are searching for their scattered gang members. John Marston, the lead character from Red Dead Redemption, is missing. Finding him is one of your first tasks as Arthur Morgan. The beginning is kind of plodding, but you learn important things like how to ride a horse, track an animal or human in the wild, and hunt. The group sets up camp and you try to help improve the common good by hunting and providing and protecting. And they must escape federal agents, bounty hunters, and private armies like the Pinkertons.

The world feels alive. It has 10 times the custom animations of GTA V. It has 300,000 individual animations, 1,000 things to do and discover, 500,000 lines of dialogue (or twice the number in GTA V), and more than 1,000 actor performances in the game. (Yes, it is no wonder Rockstar is facing allegations of involuntary crunch, or forced overtime.) The game also has better artificial intelligence that appears to sense what you are thinking. Rockstar has taken full advantage of what this generation’s consoles can offer.

What this means is that if you follow a nonplayer character into an alley, they will look back at you and start to worry that you mean ill intent. The character will question you or stop working to confront you. If you have bounty on your head, the passersby may recognize you and report your presence. If you pass by someone with your gun drawn, they may react in a hostile way. You can defuse confrontations, or you can antagonize others into attacking you.

If you are known for shooting up a town and then paying off the bounty, the survivors will treat you with disdain. Every now and then, when you are shooting someone, or when you are riding in the wild, or when an important part of the story unfolds, the camera goes into a cinematic mode. When you walk by two women having a conversation, they will begin to include you in the chatter. All of this helps you feel like you are in a living world. 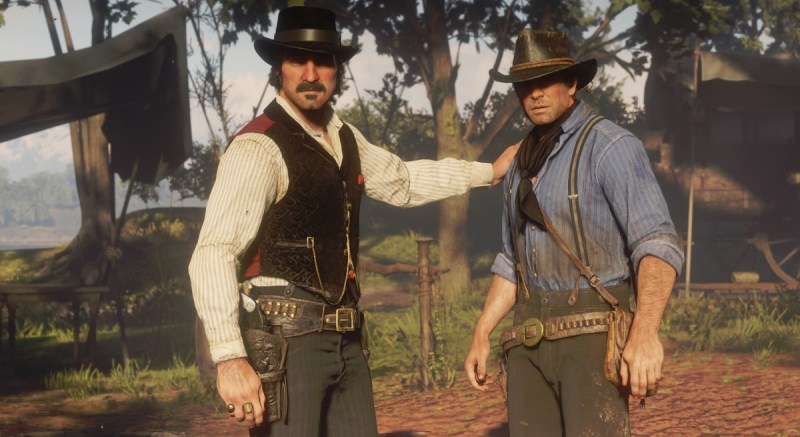 I’ve already mentioned the living-world cliche. And I don’t always like to throw around the word “epic,” as that’s what marketing departments do in just about every description of any video game. But Rockstar has set itself apart with the quality of its stories. You can find pathos in the loss of the freedom and frontier lifestyle that forms the backdrop to the tale of Dutch and Arthur. While they’re not nice people, you spend so much time with them that you want to see them fulfill their dreams of escape.

Just when I thought I was getting a little bored, a new kind of mission surfaced. Every now and then, a big twist takes the story in a new direction, and it reminds me that the Rockstar team has some awesome storytellers. I loved getting to know the characters in the gang and the villains — whom you might otherwise think of as law-abiding citizens. You can get to know the members of the gang during missions, where you can tell if they’re cowardly or brave, or you can spend time talking to them in the outlaw camp.

Arthur was adopted into the gang at a young age, and he is one of the few who has been with the gang forever, compared to some who have only been on board for a few months. Arthur buys into Dutch’s dream of living free from the law and societal interference. A charismatic leader, Dutch treats Arthur like a son, but the gang has a lot of baggage, and Arthur has to decide how much he is willing to follow Dutch. Arthur also has to make choices that tell you whether he’s an honorable outlaw or a dirty one. If you remember the plot of Red Dead Redemption, which takes place chronologically after the second game, you’ll wonder how each character turns out.

Diversity of missions and places 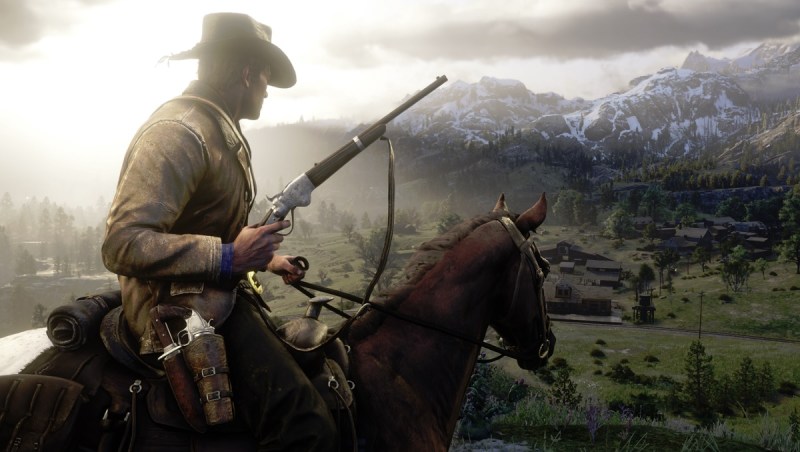 Above: Arthur Morgan strikes out on his own in a lot of missions in Red Dead Redemption 2.

I loved going on missions like a train robbery, a bank robbery, a chase through the woods, or even hunting a 1,000-pound bear. One mission involves an alligator, and I won’t say more about that one. You also have random adventures you can pursue. These don’t advance the story, but you can get more resources from them (by looting the enemies you kill) and come face-to-face with interesting moral choices, like whether you should help an escaped convict get out of his chains.

The gang gets chased around multiple states in the fictional American West, and each time it is forced to move, a new chapter in a new place begins. You can explore the snowbound mountain trails of the East Grizzlies, the grassy plains of the heartlands, treacherous alligator-filled swamps, the rapidly modernizing city of Saint Denis in the Southeast, as well as the classic Southwest frontier. You’ll also go to a number of places you wouldn’t expect to see in a Western.

The game begins in the snow-covered mountains, in the midst of a blizzard. Even on the aging PlayStation 4, the animations of snow particles blowing sideways in the wind look amazingly realistic. The animation of the human faces look superb. The motion captured movements also look real. When you move through the snow, you leave footprints and trails behind you. The music is stirring, and the developers included 192 separate pieces of original interactive score. The combined effect will make your jaw drop open.

Since the world is huge, you’ll see a wide variety of environments, from the mesas of the Old West to the industrial factories of modern cities. The facial animations and close-ups of the characters are also believable, getting over the challenge of the “uncanny valley,” or the notion that animated faces look weirder the more realistic they become. I came to think of the characters as people, not animated pieces of code.

Just standing in place and watching the wind blow through the grass, you can see how much work Rockstar put into things like shadows, lighting, ambient sound, music, weather effects, and facial and body animation. The world is visually arresting and it is filled with things to do, and it has a lot of ambient sound and ambient life. I was running down a path, and I laughed when a pig charged up behind me and knocked me over.

The user interface and controls are simple

When you need to pull up your inventory, you hit the left bumper and the weapon wheel appears. If you further squeeze the right trigger, you can then see a secondary wheel of items and then quickly select an item you want to use. When you don’t need to see the inventory, it disappears from view.

This kind of weapon wheel and inventory system makes switching weapons during a gunfight simple and fast. The mini map could be bigger, as it feels a lot like a GPS that tells you at the last minute to make a sharp left turn.

When you are in combat, you can target enemies with auto-aiming by squeezing the L2 trigger. But you have to move your right stick to target enemies more precisely. I learned to control the game quickly and fluidly, so that I never had to slow down much to accomplish certain tasks. That feeds to the illusion that you are in a cinematic experience, more like a movie than a video game. When a cut scene comes, black borders appear and the top and bottom of the screen. I had an easy time learning how to ride a horse, as it’s a lot like playing GTA V, except with horses.(And yes, like with cars in GTA V, it’s quite easy to crash your horse). It feels like a lot of thought went into making the user interface less intrusive. 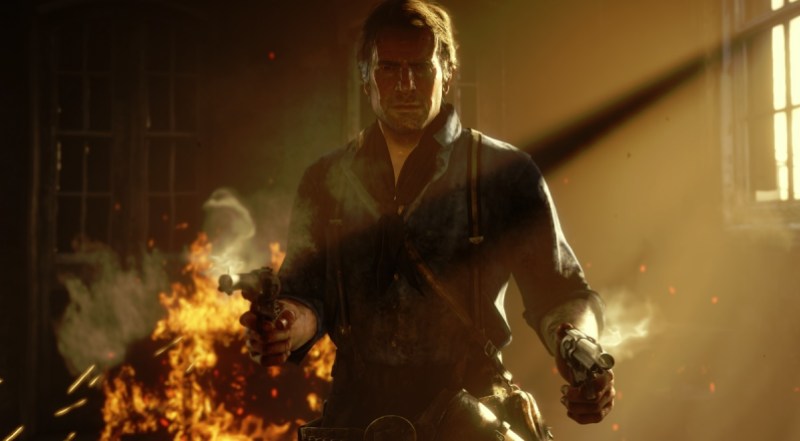 Above: Arthur Morgan is a legendary enforcer.

This is a game, not a movie, and you can tell that through the quality of the combat system. As you would expect, the Wild West of Red Dead Redemption 2 spawns a lot of combat opportunities. It is spaced across multiple missions, but every once in a while you get into a gigantic shootout. The Dead Eye system is back, and it allows you to shift a scene into slow motion for a limited period of time. During that time, you can target multiple enemies at once and shoot them all at once when the slow-motion returns to fast. When you are being chased on horseback, it’s easy to shift the view so that you can turn around and target your pursuers with pistol fire. If you leave yourself exposed in front of the AI enemy, you’ll die quickly.

It’s not perfect combat, as you spend far too much time trying to auto-aim at enemies and then getting no results. Quite often you have to shoot enemies four or five times to bring them down. But as you get used to the system, you’ll find yourself trying to get headshots just for the rewards. You can find 50 weapons in the game, and you’ll learn how to use a lot of them. And sometimes, you’ll have more than 50 enemies to shoot.

The voice acting for Dutch Van der Linde and Arthur Morgan is first-rate. I’ve come to expect this from Rockstar’s games, but the quality of the facial animation and the voice acting goes a long way toward making you believe that this game is for real. It’s part of making you care about the characters.