In the niche world of celebrity Japanese game designers, Hidetaka “Swery” Suehiro‘s up-and-coming status can seem a bit out of left field for Western audiences. His resume is full of strong titles that just barely skirt under the radar compared to his more recognizable contemporaries, such as a Yoko Taro or Hideo Kojima.

I would say criminally so.

Deadly Premonition, D4: Dark Dreams Don’t Die, and his latest work, The Missing, contain interesting twists on gamine tropes, with a running narrative theme of characters traversing their worlds searching for a significant chunk of themselves that is lost.

In the case of The Missing (out now for PC, PlayStation 4, Xbox One, and Switch), the protagonist is J.J., a girl who has lost both her mortality and her sister on a mysterious wooded island. This new gained immortality allows J.J. the ability to hurt herself on purpose in order to solve intricate obstacles that lay between her and discovering the fate of her sister. It’s a unique premise that counters the medium’s foundation tropes on pain and death.

I was given a special opportunity to play through a little bit of The Missing with Swery while discussing the challenge of designing not only a side-scrolling puzzle game but also one with such a unique premise. 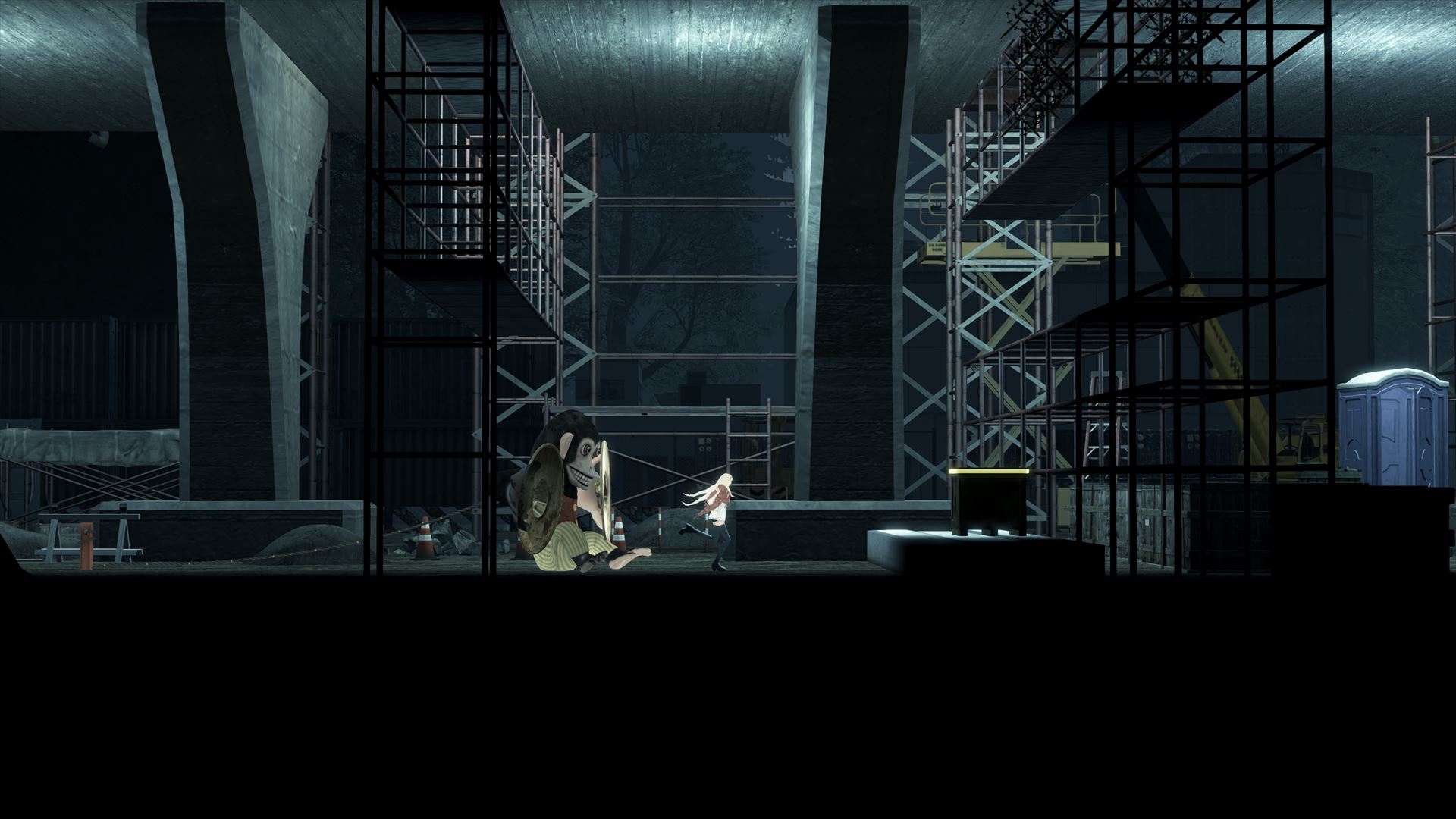 Above: Not creepy at all …

GamesBeat: [Putting down the controller] It feels a bit like Out of this World, aka Another World. I’m not sure if that was any kind of influence, where you have side-scrolling puzzles and a narrative, yet the game doesn’t need to over-explain what the narrative is. The narrative is taking place within the action itself.

Hidetaka “Swery” Suehiro: It’s like movies that don’t have any cuts like Zero Gravity. That’s something like the effect I was going for too. Everything is happening in this 2D scrolling scene. The characters are interacting and acting on this plane. There’s no cutaways at any time.

GamesBeat: What would you say are some of the influences for that idea, then?

Swery: When I was growing up, I was very inspired by games like Prince of Persia and the game that you mentioned, Out of This World, Another World. Those were great. But after a while, those games kind of died down. They weren’t very popular. But nowadays you see great games again like Limbo, Inside, and Ori, things like that. I thought this was a good opportunity for me to jump on that wagon.

In a side-scrolling game you have a stage, you have objects, you have enemies, and you have characters, but I wanted to take it a step further. My idea was to add that fifth element in the character themselves, where they would be part of the game mechanics.

GamesBeat: I’m trying to think off the top of my head of something like this, that’s done this idea of hurting yourself on purpose and using a piece of your body in this way. That’s pretty unique. How did that idea come about?

That’s one thing, and the other is very much related to the story of the game itself. 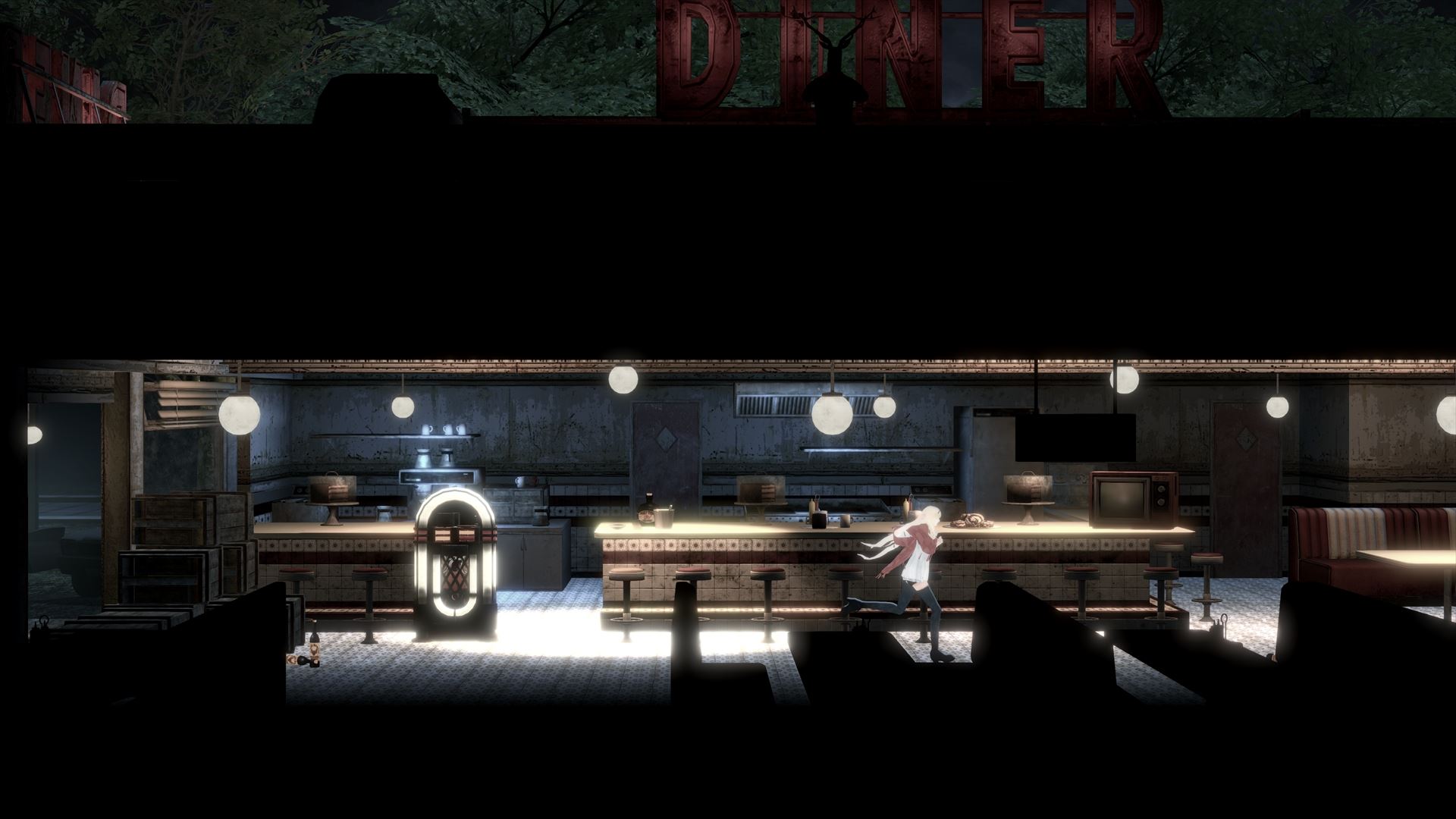 Above: Abandoned Diners, a staple clue that something weird and mysterious has happened to this town.

GamesBeat: Did this concept pop up while prototyping, or was it an idea that came to you out-of-the-blue and became something you really wanted to try?

Swery: What really dawned on me, I guess, was the idea, like I said earlier, of adding that fifth element to a puzzle action game. And then also this character as immortal, that’s something that just popped into my head.

But when I wanted to make it into a game, I really struggled and debated internally, “Do I make it an action game, where this immortal character tries to defeat an enemy with their immortality, or is it going to be a puzzle game?” That’s something I had to do a lot of trial and error around with preproduction builds and prototypes — sitting down with my team and really discussing what the direction was going to be.

GamesBeat: As I was playing, I was also thinking to myself, as a designer, how do you tackle knowing when your puzzles are working? You know how the puzzle works, but how do you iterate testing the puzzle in a way where you know the average person can figure it out?

Swery: It started off very simple. The game designers were very generous with the level design. Their philosophy was, “Make something stress-free where the solution is there for you.”

I stepped in and said, “Let’s trick the players a little. Let’s make them work a little bit harder.”

It was a back and forth. We discussed it as a team to come up with the final product. We really wanted the player to feel a sense of reward when they finally get through the game. Without that difficulty, we can’t really have that sense of reward, so we had to find that balance.

GamesBeat: Did you ever find that you have to occasionally take the game away from the people you’ve been testing with and go to someone who’s never played it before?

Like today with me and some of the other people you’ll be showing this to later and the varying degrees of abilities to solve these puzzles?

Swery: You’re exactly right. I have a lot of friends who are also game developers, indie developers, and I’ll invite them to my studio. We sign an NDA and they play the game.

Obviously, because they’re gamers and game developers, they’re pretty good at it. It’s a good way to assess how much difficulty they’d have with the game. But also, I can take the same game to one of my administrative staff, for example, who aren’t necessarily gamers, and they’ll have a completely different experience.

It’s very effective to do that mix of research and balance the game that way.

The duration may be different, but spending that time was enjoyable for everyone.

GamesBeat: Is it difficult to find a middle ground between those two types of people?

Swery: I think in action games it’s more difficult for an action game to find that middle ground.

But for puzzle games you can … I don’t want to say it’s easy, but you can get away with being a lot more difficult, making a game that can’t be cleared by 100 percent of players.

Like I say, that thinking process is where you get the most out of the game. 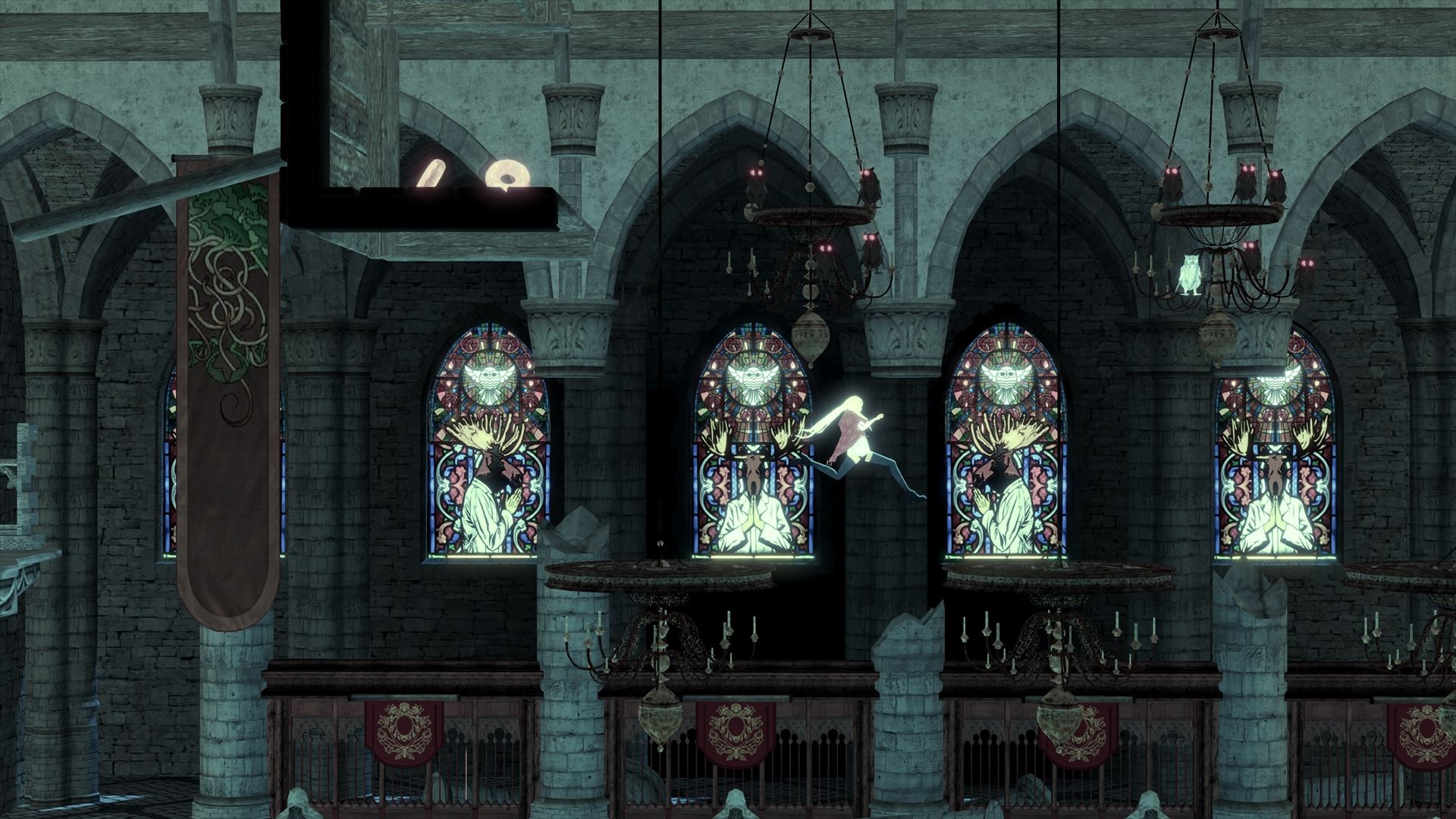 Above: An interesting way to build a church.

GamesBeat: I’d imagine it’s also … as artists we communicate visually. Maybe it’s part of that as well? That visual communication of what’s in front of you?

Swery: I do try to make sure, for example: Visually, I try to give visual cues, like yellow as a marker as something you can touch or interact with. Or a previous experience applying to another experience in the next opportunity, an application of that to make it a bit more challenging.

We use things like that to make sure that anyone can clear the game, to teach them and communicate to them – hey, this is an application of that.

GamesBeat: As designers and artist we have to communicate visually, and you definitely have to have strong visual communication in the puzzle genre. You want it to be tricky, but you want it to be clear enough so that players can solve it.

Do you find any cultural differences with visual communication? Like, if this is going to the West, western players may solve a visual puzzle in one way, and in the East, they may think and try to solve the puzzle in a different way?

Swery: At first I was actually planning on making this game textless, kind of like Inside. But when I did that initially and I had some of our Japanese staff play it, they just couldn’t. They had no idea. They had a really hard time understanding it.

So to mitigate that and balance that out, I made a bit of a tutorial at the very beginning with some text to alleviate that difficulty. For example, in Japan, Japanese people never press a button until the game says to. If a game doesn’t prompt you to press a button, they’ll never press it.

But western gamers are always pressing buttons, always trying things. A design like Inside works for a western audience, but for a Japanese audience, that’s a bit of a tricky part.

GamesBeat: In Japan, do people tend to read manuals first before they play a game?

Swery: Yeah, even a long time ago, we’d buy the game on the way home from work, get on the train, and then read the manual on the train. [Laughs]

GamesBeat: The tradition here is to not even bother reading it.

Swery: Yeah. I don’t know about nowadays, but back in the day, that’s what we used to do. 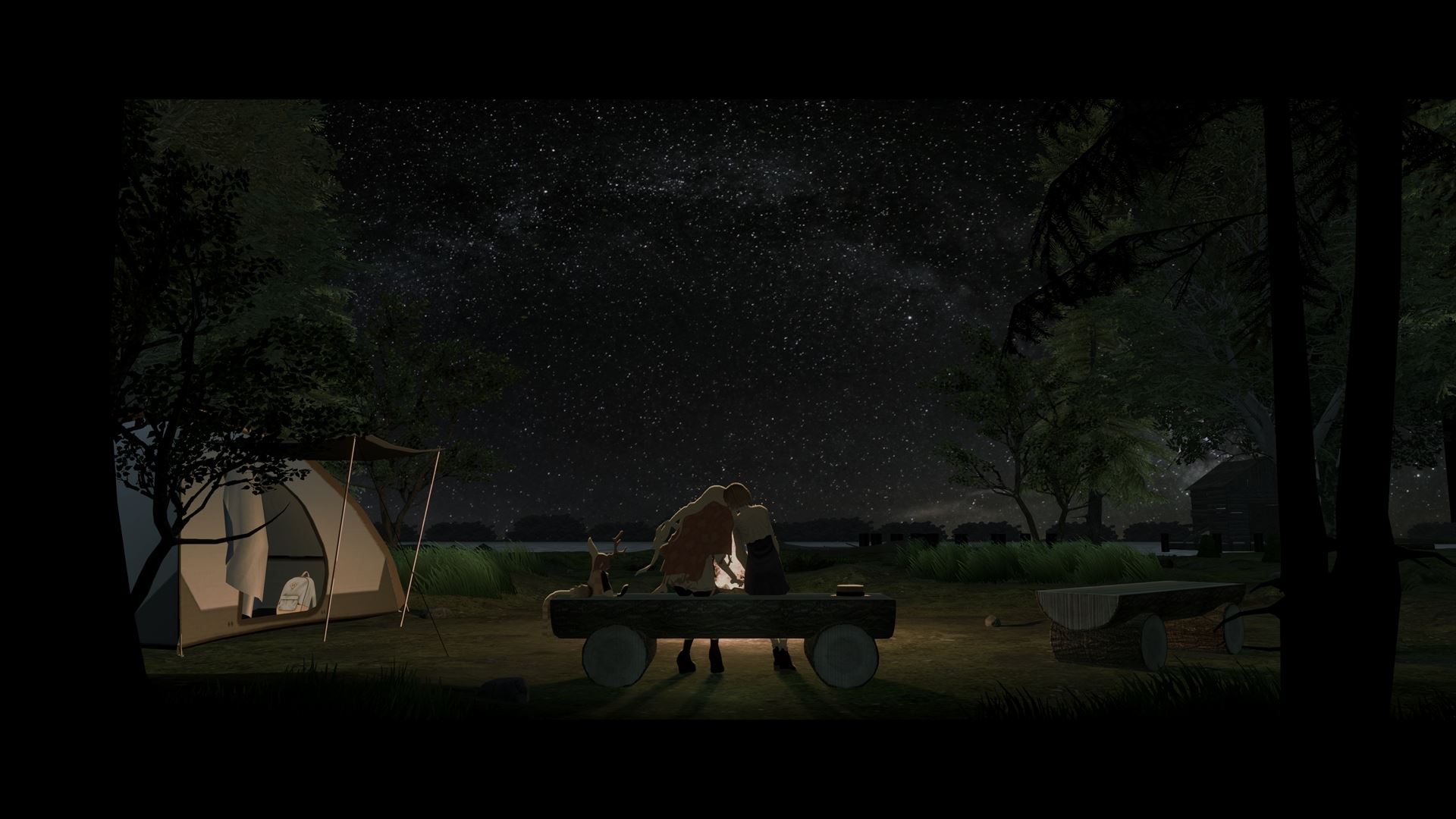 Above: Don’t take for granted those closest to you.

GamesBeat: In the narrative itself, was that a consideration at some point? To not have any text for the story?

Swery: When we made the game, we made the entire game as the overarching story of this girl trying to find her friend. The game was already done like that.

Then we were trying to fit story elements in between to convey the story. We didn’t think that making the characters act within that game context would fit very well, so that’s how we came up with the whole idea of the cell phone screen and the chat system — to bring out that story element.

GamesBeat: I don’t want to seem like I’m being negative, but the game is very visually expressive. I think of games like Prince of Persia and Out of This World, and they also told their games very expressively and less with dialogue and text.

Swery: I really had those games in mind, like you said. They were a big influence, and I’m trying to convey that as well. 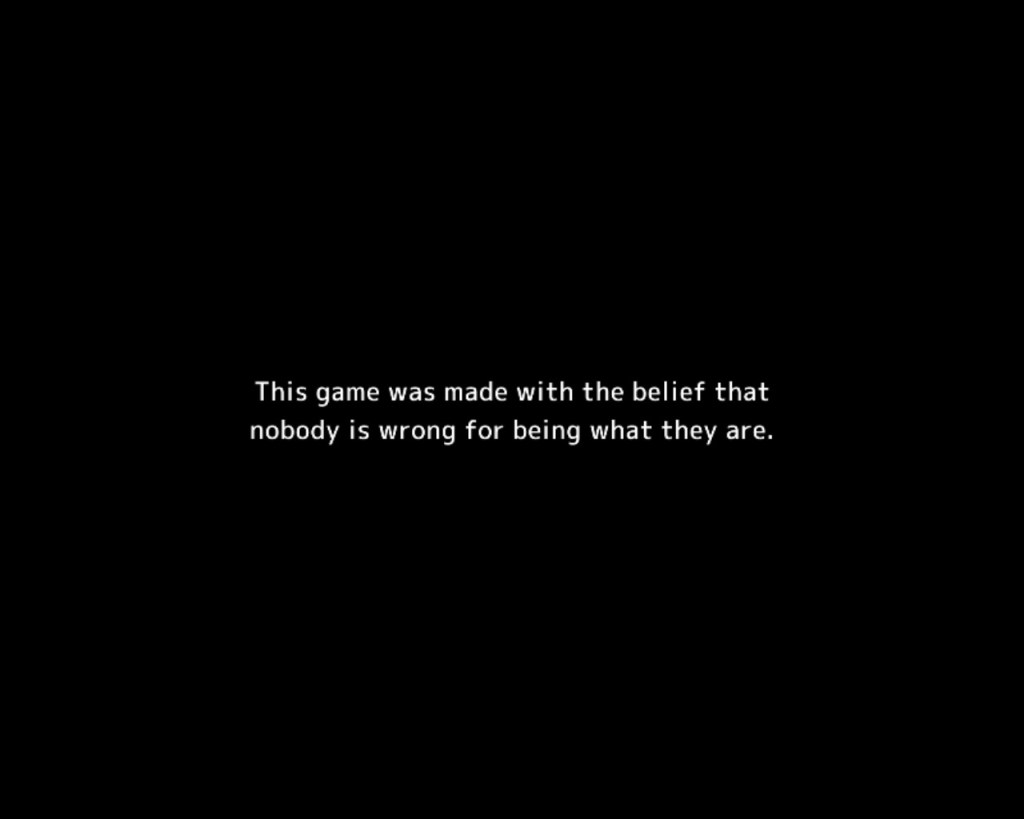 Above: The theme behind development of The Missing

GamesBeat: What was the spark … the influence behind the narrative side of this game?

Swery: When you first launch the game, there’s a central message that pops up. Basically, the narrative is centered around that message. I’ll show it to you quickly.

I can’t go into too much detail around the story, but when I first made this game, the way it looks, I thought it was pretty extreme, pretty gory. So I wanted to make sure it was grounded in reason, grounded in some central theme. That’s why I put in that central message and established that and then built the story around it.

Obviously there’s a pretty deep story that surrounds the game, the environment, the mechanics. I don’t want to spoil too much.

GamesBeat: Do you have any final thoughts you’d like to wrap up with?

Swery: Like I said earlier, this is the first game to come out of my new studio. I’m trying to do something that’s a step further than just being about a story or a character.

You may see at first that it has some very extreme themes, some very strong themes, but they’re all grounded in reason with that central theme in mind. I hope that you can get your hands on the game and play it and experience it. I think the story should resonate with everyone.

Everybody should have something they can empathize with playing this game.