Above: TwitchCon will draw thousands of people to San Jose, California.

GamesBeat: Looking at Streamlabs and tipping, I wonder how strongly that kind of thing has come on.

Shevat: Our direction moving forward is to provide developers with more capabilities on the platform. I think it ties into what Shadow said earlier. She said, “I want interactions to make money, but on the page, on my channel. I don’t want to send people off my channel.” One of the anti-patterns that we’re trying to work on with developers — a lot of things, you need a link to do something outside the channel. That’s misaligned with what streamers want.

We’re trying to move these types of interactions to be more on the channel. That’s one of the reasons we have extensions. A lot of things say, “Hey, if you want this interactivity, go to another site and vote there.” This is counterproductive to our streamers, so let’s give this canvas to developers to bring those interactions back on the channel.

Developers are making money out of selling goods, like PUBG, as well as Bits and extensions, and selling games in the Twitch experience. Moving forward, we’re going to have ads and subs and merch.

GamesBeat: For the streamers, does it seem like tipping could be a big part of their income, though? If I want to just pay someone directly, can you make that happen?

Shevat: We have the cheers, with Bits. That’s the interaction we’re seeing. People are dropping a lot of Bits. Streamers love it.

GamesBeat: And that gives them a chance to interact with that person in that moment.

Shevat: My kid has Twitch Prime because I’m a Prime member. The first time he gave some value to a streamer and the streamer said, “Thank you for doing that,” my kid is just, “Oh my God!” To your point, it’s exactly the type of interaction that blows people’s minds. Because this is a live and shared experience, when the streamer thanks you, or in sound alerts — one of the keys to the success of sound alerts, when a sound plays you see the name of the person who played it in the OBS. Getting that recognition — that’s why this is one of the key interactions we’re seeing being successful and requested by our viewers.

GamesBeat: How much of a challenge is it for you guys, on the back end, to make that instantaneous? In the past you would see people say something in the chat and then way further down you get a response.

Shevat: There’s two things. If this is a message that comes in the video, there’s a few seconds of latency there. But if I’m doing things like playing a sound, and the sound is five seconds, and two seconds later I see the name of who played it, that’s still very positive interaction. We also, last week, enabled a feature for extensions to post in chat. Let’s say I’m doing an interaction to choose a game. I click on that, and immediately a chat message goes in. We’re tying together more places where you can say, “This person has been awesome. This is what they’ve done.” We’re building more and quicker interactions.

GamesBeat: If you look at the bigger picture, how much are you moving toward the vision of a creator economy, where everyone makes money? Beyond just the celebrities, to the point where there’s a longer tail of people making money.

Shevat: The biggest thing we’ve done is our Twitch affiliate program. When you look at Twitch, in terms of our monetization features, we have more ways to monetize than anyone else, and we have a lower barrier to entry to start taking advantage of them. While other sites might be making it harder to make a living, we’re making it much easier. The barrier to entry to become an affiliate is very low. Right now we have several hundred thousand. We’ll be announcing some new data related to how much that’s grown in this year alone. We’re trying to help small and large streamers.

We’re also doing a lot with discovery. This year we launched our Creator Camp, which basically–a lot of sites might have help centers. We have a help center. But the Creator Camp was designed to focus on–these are the six things our community asks about the most. Let’s hit those things. The insights are provided from successful streamers as well as staff, so you get a mix of people internally and people who can say, “This is what I did and look where I got.”

We also do live Q&As with the Creator Camp. That’s unique to Twitch. If you’re watching a cooking show on TV, watching a VOD or something, someone might say, “You put this much garlic in.” And you might think, “Well, but can I use this ingredient instead?” You can’t ask a TV that. But when you go to the Creator Camp, you can ask someone, “Well, would it also work this way?” That kind of interaction is unique to Twitch.

Another way we’re helping with discovery, IRL and creative are two of our most popular categories, but they’re so broad in what they encompass. IRL was everything from somebody walking around in Korea to somebody talking about their life at home. Because it got so large, we said, “Let’s split these categories up.” I love to watch tourism videos. Now we have that category. We also have just chatting. People know what to find. Creative is also broken down into different categories of art.

We’re also going to be making some announcements tomorrow in our keynote about new things we’re doing on the discovery front with our homepage to make it easier to find smaller streamers. 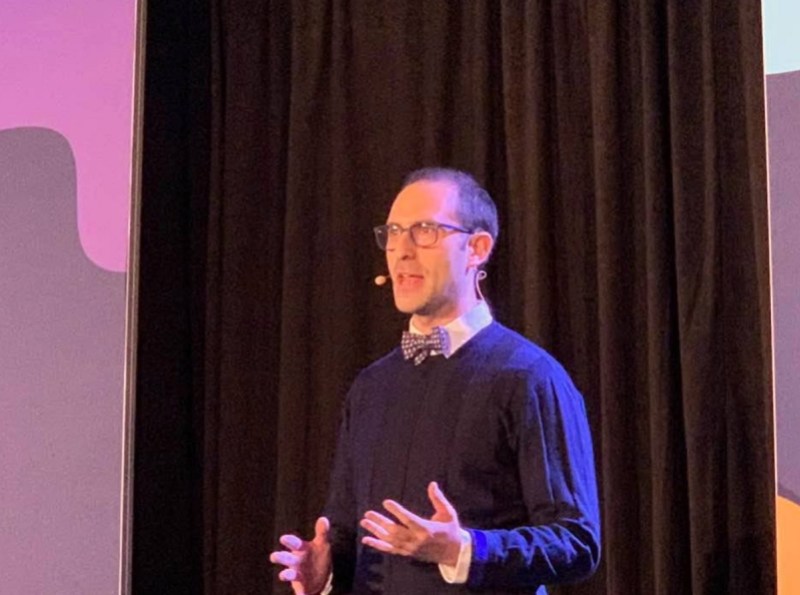 Above: Emmett Shear is the boss at Twitch.

GamesBeat: As far as stamping out trolls and toxicity, what kind of progress have you been able to make on that?

Chase: We’re constantly iterating on moderation. Another thing we’ll announce during our keynote is our most current tool that’s going to really benefit our moderators. When you look at the scope of things Twitch currently offers, we’re best in class when it comes to moderation — not just in gaming, but on the internet. There’s this refrain in social media: don’t read the comments. But if you use the tools and features that Twitch offers, you can make your chat readable. On the developer side, there are bots that can help you moderate: Nightbot, Moobot, Streamlabs. These are tools streamers can install and the bot moderates the conversation automatically.

A lot of times, if you see stories about toxicity in chat — I guarantee it’s usually because somebody didn’t read the instructions. We’re a product where you have to read the manual. It’s usually someone from another service saying, “Yeah, I’ll give Twitch a try. I’ll bring over 10,000 people and go live.” Suddenly their chat becomes unwieldy, and the media are watching because it’s a big name on Twitch for the first time. They say, “Look how bad this chat was.” But they usually weren’t using our auto-mod features.They didn’t have somebody moderating.

A lot of huge streamers have perfectly fine chat. The proof is there. CohhCarnage is a great example. He’s one of our biggest streamers, and he has the most welcoming chat you’ll find. Toxicity is something that can be controlled. You just have to take time to understand how to cultivate your community and how to leverage our tools. On top of all this it boils down to our community guidelines, which we’re constantly iterating on to make sure we’re a welcoming, inclusive, and diverse place.

GamesBeat: The bots you were talking about, is that what they meant when someone on the panel talked about extensions for those kinds of controls?

Shevat: Right. You can put in stuff that will moderate automatically for you. We do a review of all the extensions to make sure that they’re safe and adhere to our policies. Very similar to the iOS and Android review process, we have a team that reviews and provides feedback on both design and policy. We make sure that all the extensions installed are safe for both the audience and the streamer.

GamesBeat: Do you have rankings as what’s being used among extensions?

Shevat: Yes, we do. We’ll be sharing that. You can look through our discovery and see how it’s sorted right now, but we’ll be much more diligent in providing insights.

GamesBeat: Facebook’s been talking about making preparations for the election. Do you have anything like that? Making sure a lot of fake stuff doesn’t get into communications, in chat.

Chase: Before we released AutoMod, our machine learning-based moderation tool, we tried it out with the Democratic and Republican national conventions. That was our testbed. Not only was it positive, but afterward people said they were surprised at how civil chat was. At the same time, one of our rivals actually had to turn off comments because it was so toxic. That’s what led to the White House inviting us to do the first ever competitive gaming event from the White House, back at the end of the Obama administration. That was a very positive stream as well.

We’ve illustrated that we can do politics in a way that’s constructive and entertaining. The Washington Post does it every week. They’re actually out here at TwitchCon as partners, because they have their channel on Twitch. They’ve had a lot of success with politicians coming on to play games and talk about politics. It’s a really interesting case study.

I love that, because I’m seeing more and more interesting use cases around Twitch as a whole. My colleagues in other companies are using Twitch to teach developers how to build on their platform. We had a session with Stripe. They did a coding session on Twitch telling developers how to build on Stripe. We were working with the AWS team as well, and I think Slack did a session. We’re seeing more and more of these types of interactions becoming a must. If you want to engage with your audience, you have to be there live.