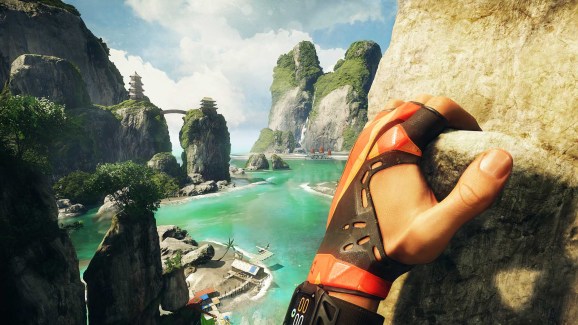 Crytek's The Climb combines the exciting new elements of VR with familiar gameplay that is rewarding in Rift.

Crytek won’t be making any cutbacks to the content of its debut VR game, The Climb, as it ports it to Oculus Quest.

The Climb was one of the first games confirmed to be coming to Quest when the headset was revealed at Oculus Connect 5 last month. Unlike games like Dead and Buried and Superhot VR, we didn’t get a look at the game on the show floor. Crytek did send out an email about the title this week, though, and subsequently confirmed to UploadVR that the full version of the game would be included.

That means each of the mountains in the original Oculus Rift edition of the game will be included, as will the multiplayer mode that allows players to compete against others and the Tourist mode that lets you explore the game with greater ease.

We enjoyed The Climb, even in its original 2016 version that only utilized a gamepad, though Crytek greatly improved the experience with the introduction of Touch controllers later on. One of the game’s main appeals, though, was the visual fidelity afforded by the developer’s own CryEngine. In fact, The Climb remains one of the best-looking PC VR games to date, so we’re very curious to see how the visuals hold up when the game is ported down to less-powerful mobile hardware. We already saw a detailed rundown of the ways that developers can adapt Rift games to run on Quest at OC5.

Crytek declined to comment on the visuals for now but, given that Quest is set to launch in spring 2019, it won’t be too much longer before we get our first proper looks at some of these games.