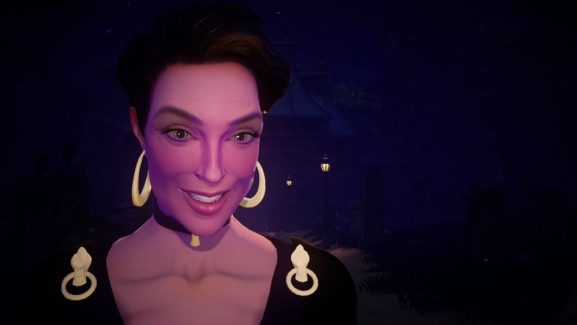 Startup Holospark deployed 32 Optitrack cameras to capture the body movements of performers along with helmets for facial capture. The result of the effort is a cast of digital characters that invaded my personal space and maintained continuous eye contact in ways only a very dedicated cast member would at Disneyland’s Haunted Mansion.

Reproducing the general feel of that iconic attraction is no easy feat — the floating candlesticks, echoey voices and memorable music — but Holospark achieved that goal with The Haunted Graveyard. The $10 world opened for Rift and Vive owners earlier this month and Holospark is also offering it at VR arcades.

Holospark took a gamble in launching its first VR title, The Impossible Travel Agency, in late 2016. While we found the reactivity they baked into that world to be both subtle and relaxing, the Fantasia-like experience was dropped onto an unfeeling Steam mob interested in only one thing — hours of gameplay.

The Haunted Graveyard arrives two years later and Holospark is showing two years of maturity in its VR design. The better reviews on Steam for this experience give me hope that folks buying VR software are starting to learn they need to speak up when a world is as rich and surprising as this one, even if it’s only designed to last a few minutes.

Some incredible titles like Accounting+ and Virtual Virtual Reality are hardly games at all, yet they provide deep entertainment packing layer upon layer into a world waiting to be discovered by a mind that is inquisitive, playful and cautious. That last characteristic is the one The Haunted Graveyard manipulates so well, luring the visitor along a spooky path with interaction points along the way carefully staged for maximum…intimidation.

I’m reluctant to spoil more about The Haunted Graveyard (there’s a highlights video below which does that) except to say it is readily apparent the care and craft Holospark took to breathe life into three characters you’ll encounter in the graveyard — building on work Holospark did last year with its striking Seance demo. Each of these characters in the graveyard left an indelible mark on not just the person wearing the headset, but also family simply watching the world mirrored on a 2D screen.

One note I will add is that traversing through The Haunted Graveyard is accomplished with an arm-swinger mechanic. You swing your arms in the real world to “walk” in the virtual one. There’s also a field of view restriction feature included by default for added comfort. I can understand why Holospark went with arm-swinger — it helps you remember the actual trip through the graveyard as opposed to, say, a teleporter system that would destroy a sense of continuity to snap between locations. If you’re scared in The Haunted Graveyard there’s a desire to go faster with this mechanism, but there are also forced stops in the narrative where a person might try to keep moving their arms to no avail. It might create some discomfort for a small percentage of folks, but then again the experience itself is so short this feeling might be subtle for the subset of people who experience it.

“Locomotion is always tricky and there’s no one right solution,” wrote Holospark Executive Producer John Scott Tynes in an email. “In our project we also needed to balance free movement with staging dramatic character scenes. We considered doing those with a fade-out/fade-in teleport to frame you in the scene correctly, but opted to keep you seamlessly in the experience as much as possible. We’ve shipped two updates already with movement improvements and will continue to iterate based on community feedback.”