This year’s record $25 billion in game industry deals in over just 9 months could mean we’ve hit the peak of the market, as detailed in tech adviser Digi-Capital’s new Games Report Q4 2018. Last time this happened, games investment and mergers and acquisitions (M&A) plunged into a games deals ice age at the lowest level in a decade. The game industry-deal cycle has swung from boom to bust twice already since 2010, so the next six months will determine if history repeats itself or the dollars continue to flow.

We saw $3.8 billion invested in game companies between January and September, which is 50 percent higher than the previous full-year record from 2017. Games M&A also hit a near record $20.1 billion in the first three quarters. But as Digi-Capital forecast at the start of the year, the game IPO market has plunged over 90 percent from 2017’s record $17.1 billion to just $1.1 billion in 2018. While Epic’s $1.25 billion investment round in Q4 has already taken games investment over $5 billion for full-year 2018, these dynamics could still be early signs of game over (for now). 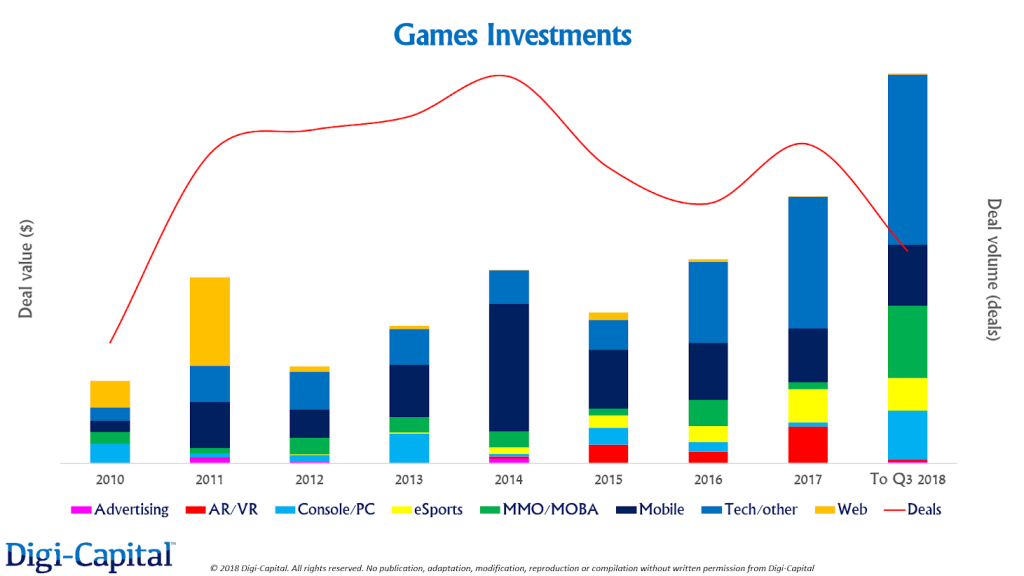 While the boom-and-bust cycle (coming back up from the web/social investment early 2010s), of game industry deal-making has revolved primarily around M&As and IPOs, annual games investments broke through the $3 billion barrier for the first time earlier this year. Rising to nearly $4 billion by the end of Q3 2018 and topping $5 billion already by October from the Epic deal, this level of games investment is unprecedented. While many VCs remain wary of the hit-driven nature of games, something has changed for those who are investing.

Nearly $1.5 billion was invested into games streaming platforms like China’s Douyou and Huya, as well as smaller investment into Caffeine in the West. But while the big bets have been on streaming as the future of major media, esports received just 8 percent of VC games investment and has less than 1 percent of long-term games market forecasts (despite all its media coverage). Investors could be thinking that the two sectors might pan out similarly to YouTube (platform) versus YouTuber networks (content).

Perhaps most surprising is game developers taking serious investment in MMO/MOBA, mobile, and console/PC games sectors, despite the high level of consolidation in those sectors. A chunk of this came from Tencent, diversifying beyond challenges in domestic markets from new Chinese games regulation. It’s worth noting that VCs’ recent games content investment comes just seven years after nearly $1 billion was lost betting on web/social games in 2011. Perhaps today’s VC funds know something their predecessors didn’t, so hopefully they’ll get a better return on investment this time. 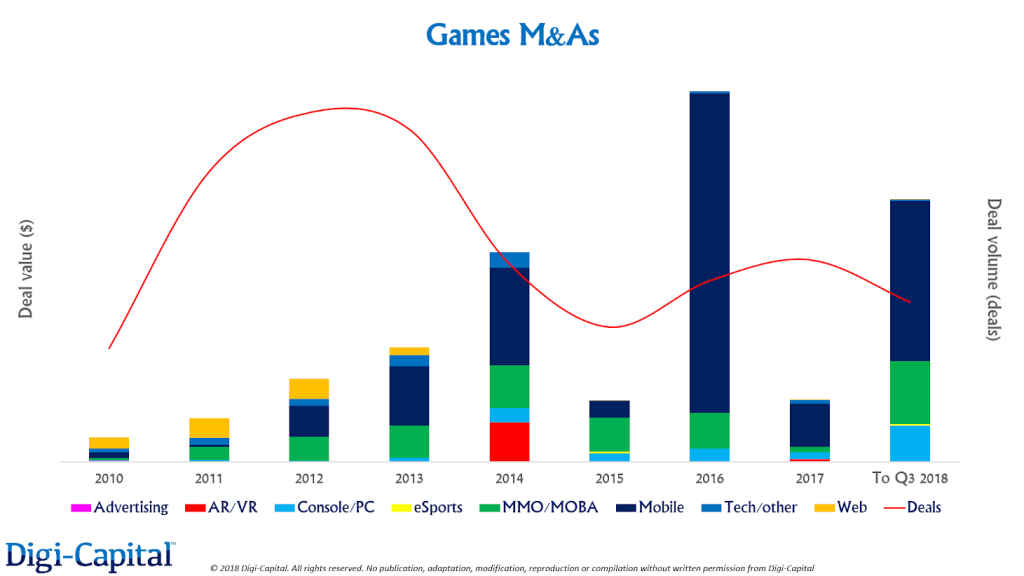 Game industry M&A has been dominated by giant deals as usual, with Naspers selling 2 percent of Tencent for over $10 billion dollars for a 60,000 percent return (that’s not a typo). This sale looks prescient with Tencent’s share price dropping nearly 40 percent since January due to the Chinese regulatory change, until you look at the value lost on the 31.2 percent of Tencent that Naspers didn’t sell. Tencent was also involved in the $2 billion plus acquisition of Vivendi’s stake in Ubisoft.

Non-Tencent M&A deals at scale included Zhejiang Century Huatong buying Shenyue Network (the online games affiliate of Shanda Games) for $4.4 billion, and Aristocrat acquiring Big Fish Games for just under $1 billion. These mega-deals look like late-stage consolidation, which is unsurprising given the already consolidated nature of the games sectors where they happened. 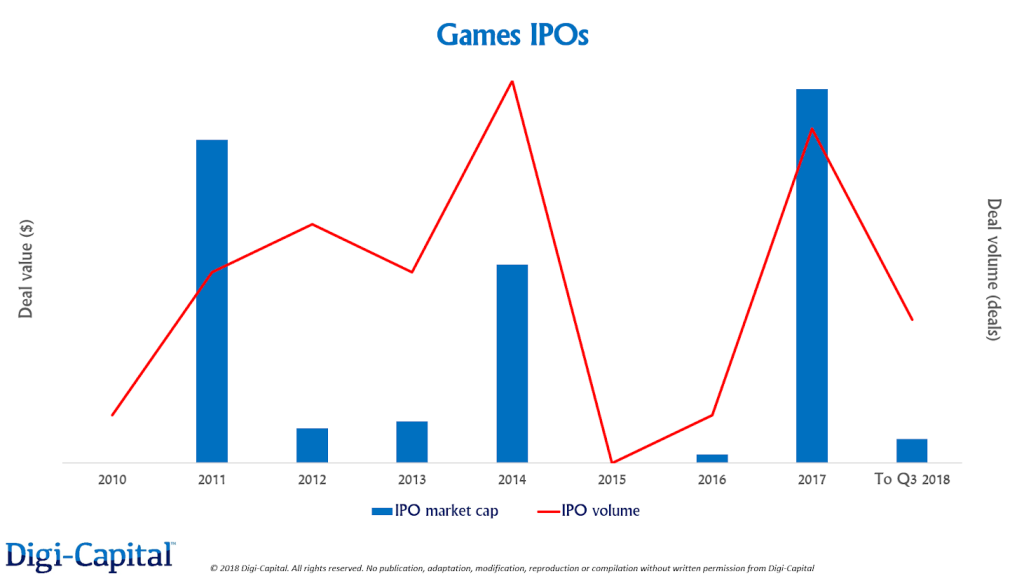 Game industry IPOs since 2010 have followed a consistent pattern, with one big year followed by two quiet ones. Again this dynamic has happened twice already, and 2018 looks it could be the third iteration. While this wasn’t the only factor driving Digi-Capital’s forecast of what happened to IPOs this year, VCs and management dreaming of 2019 IPOs could be losing sleep right about now.

Deal-making is hard to predict at the best of times, but cycles have a tendency to come back around.