It’s been nearly four years since Apple refreshed the diminutive Mac Mini’s hardware, but the Cupertino company finally updated the old-in-the-tooth PC’s hardware at its “More in the Making” event at Brooklyn’s Academy of Music this morning.

It has Intel’s 8th generation processors — in 4- and 6-core i7, i5, and i3 flavors — and 60 percent faster graphics. The processor’s paired with up to 64GB of DDR4 SO-DIMM RAM (8GB comes standard) at 2666MHz and up to 2TB of SSD storage — double the capacity of previous Mac Minis. Overall, it’s up to 5 times faster than the previous-gen models, Apple claims, and can drive 4K and 5K Thunderbolt displays and output in three formats — HDMI, VGA, and DVI. 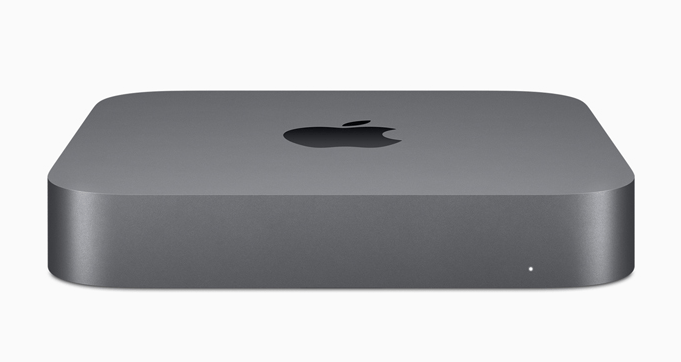 In terms of ports, there’s plenty to go around: two USB-A, HDMI 2.0 video (up to 4K at 60 frames per second), four Thunderbolt USB-C, a 3.5mm audio out port, and a Gigabit Ethernet port (you can add up to 10 Gigabit Ethernet, if you so choose).

Also onboard is Apple’s T2 chip. It’s 64-bit ARMv8 silicon — a variant of Apple’s A10 — that runs Apple’s custom BridgeOS 2.0 operating system (an Apple WatchOS derivative). Principally, it provides a secure enclave for encrypted keys, handles system functions like the camera and audio control, and facilitates on-the-fly encryption and description for the onboard SSD. Additionally, it delivers HEVC video transcoding that’s 30 times faster.

Last, but not least, the Mac Mini’s enclosure is made from 100 percent recycled aluminum and 60 percent post-consumer recycled plastic, which Apple says help reduce its carbon footprint by nearly 50 percent. 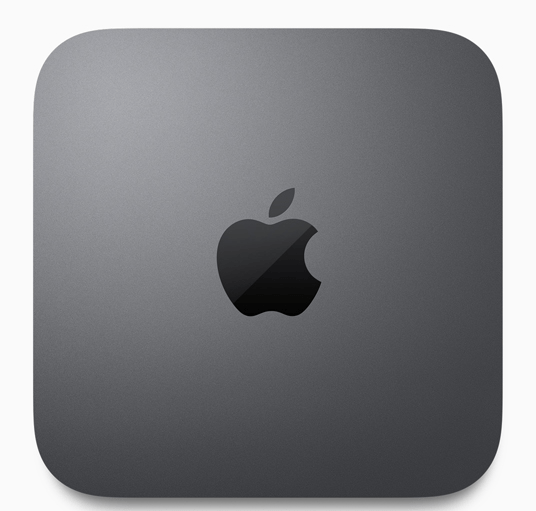 They’re available for preorder today, and hit stores on November 7. 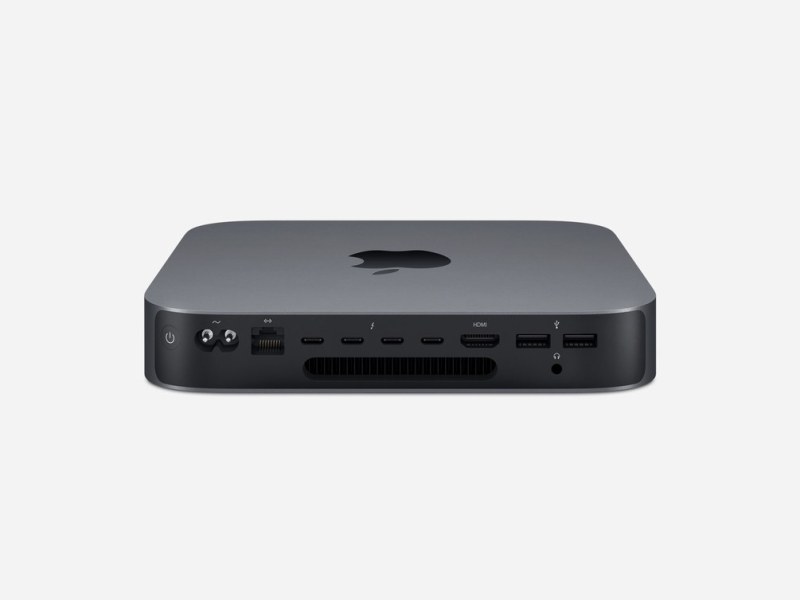 A brief history of the Mac Mini

The storied “headless” Mac’s origins can be traced back to January 2005, when it was announced alongside the iPod shuffle at the Macworld Conference and Expo. It was described at the time by then-CEO Steve Jobs as “the cheapest, most affordable Mac ever.”

It was originally positioned as a budget PC — an affordable answer to the high-end Macintosh lineup. That was in part because of its heat constraints, which necessitated the use of low-power laptop components and low-profile hard drives and DIMMs.

October 2009 saw the introduction of a new, smaller Mac Mini model with a second hard drive in place of an optical drive; it was marketed as an affordable server for small businesses and schools. And in June 2010, Apple took the wraps off a thinner, aluminum-clad SKU with a removable case and upgraded hardware, including an HDMI port and Nvidia GeForce graphics. Subsequently, the Mac Mini gained a Thunderbolt port, an Intel Core i5 processor (and quad-core Core i7 in the server model), integrated graphics, and an optional AMD Radeon graphics chip.

The last Mac Mini update before today’s announcement was in October 2014 and brought Haswell processors, upgraded graphics, a $100 price cut, and non-upgradeable memory.

It’s a bit hard to believe now, but the original Mac Mini — which was made of aluminum capped with polycarbonate plastic on the top and bottom — measured 2.0 x 6.5 x 6.5 inches, had no visible screws, and was rated at just 110W on the high end. The slimmer 2010 model shrunk to a height of 1.4 inches, but was slightly wider at 7.7 inches and rose in weight from 2.9 pounds to 3.0 pounds. It traded an external power supply for an internal one (and ditched the polycarbonate plastic on the top and bottom). And the 2017 model — the lightest of all — still weighed a whopping 2.7 pounds.

The Mac Mini became incredibly popular for home theater use cases, despite its lack of an integrated TV tuner card. Its IR receiver — and OS X’s Front Row, since discontinued — made it something of a plug-and-play entertainment PC. The 2014 model supported resolutions up to 2560 x 1600 via the Mini DisplayPort — short of 4K, but well in excess of 1080p.

Apple said that over half of Mac buyers are new to Mac, and 76 percent of them are in China. The company also announced it has reached a new milestone: 100 million Macs sold.