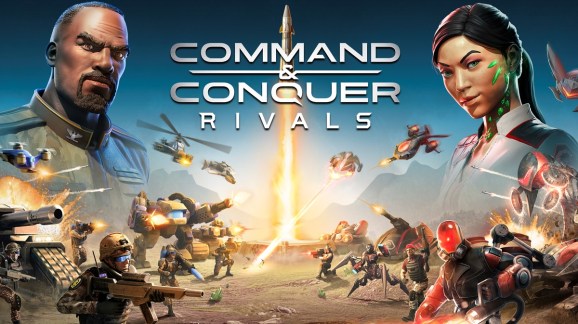 Command & Conquer: Rivals will come out on iOS and Android on December 4.

Electronic Arts said that Command & Conquer: Rivals will debut on Android and iOS worldwide on December 4. This mobile take on the long-lived series is a fast-paced, real-time strategy (RTS) action game built for players on phones and tablets.

EA said the Command & Conquer game will be the next official EA competitive gaming franchise. That means EA must be pretty confident the game, based on the C&C franchise from the 1990s and 2000s, will be a success.

Command & Conquer: Rivals is, a real-time player versus player (PvP) game, where gamers lead their faction to victory in the war for Tiberium, a key resource.

I played the original C&C RTS games back to the 1990s. Like those, the new one requires preparation. Unlike games with “drop-and-watch” mechanics, players in Rivals maintain 100 percent control of their units at all times, adding strategy and depth to a mobile gameplay experience.

“We set out to build an RTS game for mobile players that thrives on head-to-head competition and where strategy and skill matter. With continuous unit control and intense battles where comebacks are possible, Command & Conquer: Rivals delivers this and more,” said Michael Martinez, Redwood Studios general manager, in a statement. “We’ve been thrilled to see the early response from players during soft launch. Player feedback has made the game stronger for our launch in December and we’ll continue to work with the community as we accelerate into esports next year.”

Rivals Champions, a new weekend mode available at launch, is an in-game competitive experience inspired by the popular FIFA Ultimate Team Champions in FIFA and will serve as the first step in working with the community to launch a multi-continent esports program in 2019.

In this mode, players will go on a run of battles, competing in a unique matchmaking pool. Competition is segmented by rank to ensure players of all skill levels can thrive and win. The better they perform, the bigger the rewards.

“Rivals is competitive to its very core,” said Evan Denbaum, Command & Conquer: Rivals competitive gaming commissioner, in a statement. “We’ve been working non-stop to create the best-possible in-game experiences no matter what your skill level, and Rivals Champions is just the beginning. Most importantly, we’ll be listening to our players and their feedback as they jump in, and we’ll work together with the community to build a full-scale esports program.”