From October 21 to October 28, Crimson Hexagon said the conversation peaked on the launch day, with 148,000 positive posts. The average sentiment is 76 percent positive, and 24 percent negative. This explains why everybody is mad at Jeff Grubb’s negative reaction to the game’s systems. Take-Two Interactive and Rockstar Games said the game was the biggest weekend launch in its history, generating $725 million in revenues. 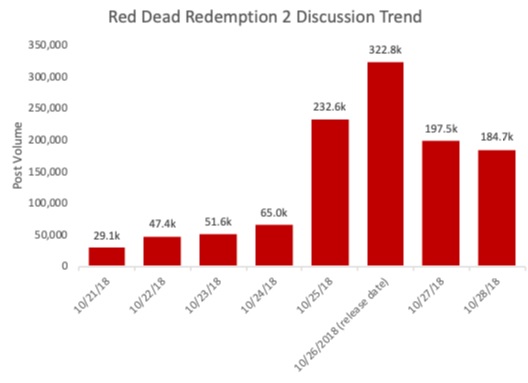 Negative sentiment is driven by animals in the game, particularly interactions with horses. (Yes, it’s kind of clunky to mount and dismount from horses, and it’s easy to accidentally run into rocks or trees with them). And, as you can see in this tweet, you can easily punch your horse if you use the wrong trigger in the PlayStation 4 version, hitting R2 instead of L2.

Crimson Hexagon said horses dominate the animal discussion, followed by bears. The discussion about horses centers around riding the horses and horse food. But the top actions related to animals are to shoot and hunt them. Rocks and UFOs are the most discussed in the person/object category. So much for talking about the main character, Arthur Morgan. 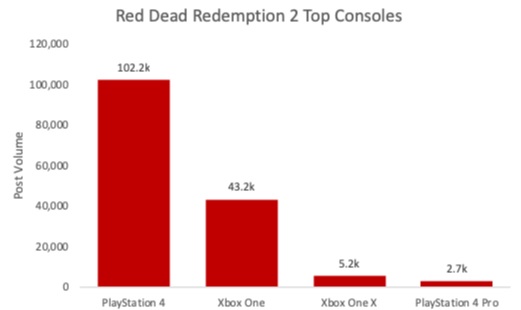 Above: PS4 is the top console for Red Dead Redemption 2.

Positive sentiment comes from the Western genre and the protagonist, Arthur Morgan. Players have referenced the streaming service Twitch 26,000 times when discussing the game. And PS4 gamers are much more vocal about their experience with the game, generating 102,000 mentions, compared to just 43,000 for Xbox One gamers.