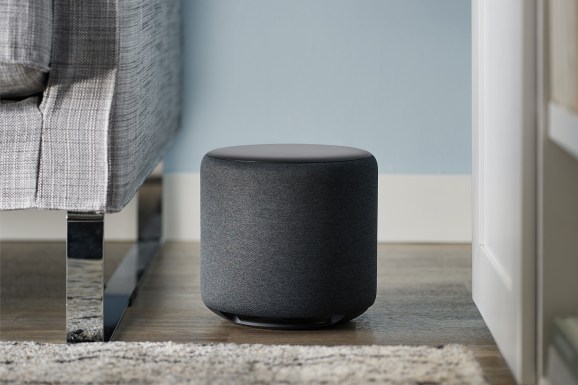 Don’t know when you’ll be free next Friday? Can’t remember when your credit card bill’s due? Wish you were notified every time your favorite sports team won a match? Alexa has your back. Amazon today announced three new productivity-centric features heading to its voice assistant: calendar integration with Routines, calendar availability browsing, and a new Reminders API.

Of particular note is the Reminders API, which enables third-party developers to alert users of upcoming events and chores.

Skills that take advantage — which today include launch partners Kayak, the NHL (in the U.S.), TV Guide (in the U.K.), and Carada (in Japan) — will remind you of flights, games, and other agenda items with a chiming noise and accompanying light pattern. Reminders can be viewed and dismissed from the Alerts & Alarms menu in the Alexa companion app on Android, iOS, and Fire OS.

The Reminders API will eventually work with Alexa’s local search, which uses Yelp to pull information about nearby places and deliver reminders about neighborhood businesses (like when a store’s about to close). And it’s compatible with Alexa Skill Blueprints, a no-code skills creation platform with over 20 different templates. (It’s worth noting that Alexa Skill Blueprints won’t show up among the more than 50,000 skills in the Alexa Skills Store — they’re assigned to devices registered to specific Amazon accounts.)

Alexa gained the ability to remember bits of information — a feature appropriately dubbed Remember This — earlier this year, and basic reminder functionality in June 2017; asking Alexa to be reminded at a particular date, time of day, or day of the week creates a corresponding entry in the Alerts & Alarms section of the Alexa app. Moreover, it last year expanded Alexa’s notifications feature — which was initially restricted to events like calling, messaging, and package delivery — to a handful of partners including the Washington Post, AccuWeather, Big Sky, Kayak, Twitch, Domino’s, and family locator Life360. But the Reminders API allows any developer to join the fray.

As for the other features debuting today — Calendar integration with Routines and calendar availability browsing —  both require that you have a calendar attached to your Alexa account. If you don’t, you’ll have to add one by launching the Alexa app, heading to the Calendar menu, choosing an account from the list of providers (Gmail, G Suite, Microsoft Office 365, and Microsoft Exchange), and following the on-screen linking instructions.

Once you’ve done all that, you’ll be able to ask Alexa to provide a list of available times in your calendar by asking a question like “Alexa, when do I have free time this weekend?” or “When do I have an hour available on Thursday?” Additionally, you can add calendars as a step in Routines.

Routines, you might recall, launched in October 2017, and let you string together custom phrases, smart home appliance actions (like switching on a connected lightbulb or locking doors), and weather, traffic, and news updates. Starting this week, you’ll see a new option in the Routines section of the Alexa app to add a rundown of today’s calendar, tomorrow’s calendar, or your next event in a one-off or scheduled Routines.

The rollouts follow on the heels of the Alexa Smart Scheduling Assistant, which added the ability to schedule one-on-one meetings based on the availability of both meeting participants, and the expansion of Alexa for Business to third-party device makers. And they come after the introduction of the Room Booking API in beta, which lets third-party meeting schedulers like Joan and Robin reserve conference rooms and check room availability, and whisper mode, which responds to whispered speech by whispering back.

Alexa’s been gaining new features at an accelerated clip ever since September, when Amazon debuted 11 new and refreshed Alexa-enabled devices including the Echo Sub; the 2018 Echo Dot, Echo Dot Plus, and Echo Show; and the Amazon Smart Plug. Just yesterday, it made the Music Skill API publicly available, allowing developers to stream songs from online services to Alexa devices and Amazon Echo speakers in the U.S. On Monday, it launched the Alexa Presentation Language (APL) — a suite of tools designed to make it easier for developers to create “visually rich” skills for Alexa devices with screens such as Amazon’s Echo Show, Fire TV, Fire Tablet, and Echo Spot — in beta. And early in the month, it unveiled APIs to connect smart cameras and doorbells to Echo devices.

A bevy of capabilities is forthcoming. Alexa Guard will connect with home security systems like Ring and ADT to send alerts in the event of a break in; Hunches proactively recommends actions based on data from connected devices and sensors; and multistep requests are coming, among other features.