Zynga is taking a stab at the heart of rival King’s candy monopoly, namely Candy Crush Saga, with today’s launch of the Wonka’s World of Candy match-3 mobile game.

San Francisco-based Zynga, a social mobile game developer, has built the game under license from Warner Bros., based on the original feature film, Willy Wonka and the Chocolate Factory. King recently launched its own Candy Crush Friends Saga, which got 10 million downloads in its first week.

The match-3 experience incorporates builder elements for players as they prepare the factory for its grand re-opening. 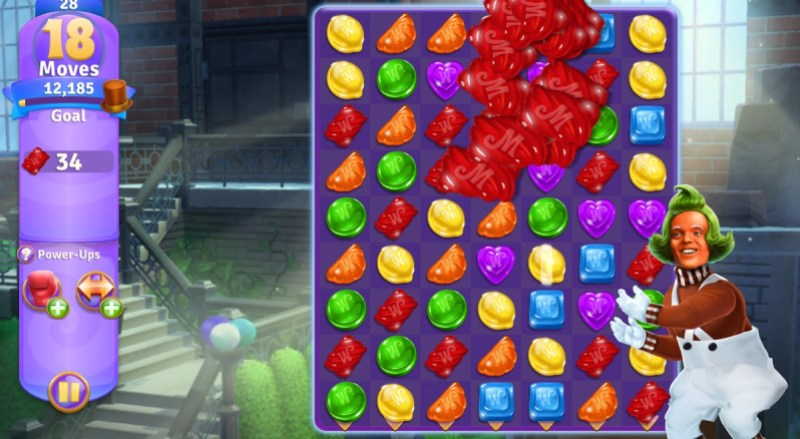 Above: Oompa Loompa in Wonka’s World of Candy.

The game challenges players, with the help of Willy Wonka, to complete a series of puzzles that allow them to win special rewards, unlocking both classic and new rooms within the Chocolate Factory. In addition to the match-3 puzzles, players can also customize their Chocolate Factory with candy-themed items inspired by the film and view their creations in 3D.

“Combining the best elements of two popular game genres allows Wonka’s World of Candy to deliver a captivating and unique mashup experience for players,” said Bernard Kim, president of publishing at Zynga, in a statement. “We can’t wait to see how this brand-new title evokes nostalgia and attracts fans old and new to this timeless classic through its imaginative gameplay.”

Players can solve puzzles and customize the original Chocolate Factory’s spaces, such as the Chocolate Room, Wonkavision Studios, and Fizzy Lifting Drinks Room, as well as all-new areas, including Candy Corn Acres and Wallpaper Orchard.

Players can download and play Wonka’s World of Candy for free on the App Store for iPhone and iPad, on Google Play for Android devices, and on the Amazon app store for Kindle.