I love playing Diablo III on Switch. The series’ action-heavy gameplay works great in shorter bursts. I’m more comfortable playing a bit of Diablo at night in bed than spending hours lurching in front of my computer. So, I’m not surprised to see Diablo: Immortal coming to mobile. After playing it at BlizzCon 2018 in Anaheim, California, I’m confident that the decision makes sense.

The Switch is only so portable. It doesn’t fit into my pocket. But my phone does. Blizzard is hoping that Diablo’s engaging nature will make it a good fit for mobile.

Diablo: Immortal controls much like the console versions. It just replaces the analog stick and buttons with digital equivalents. I miss that tactile feedback I get from actual buttons, but it all works. I played as a Barbarian, and I had no trouble running around and whacking demons with my axes. 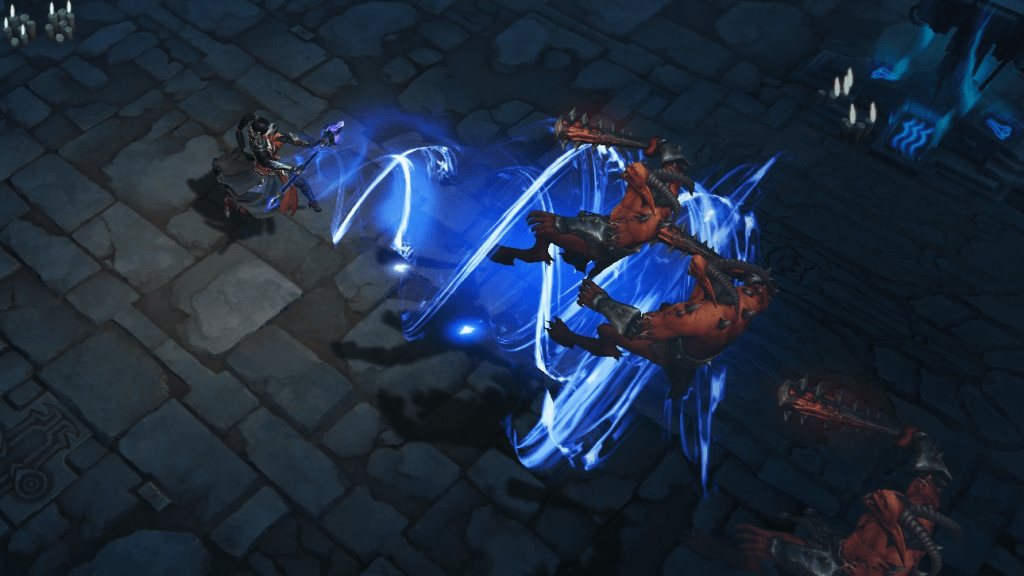 Above: The Wizard casts a spell.

In the demo, abilities had cooldowns but didn’t cost any resources like mana. Blizzard told me that this system isn’t locked down yet. It has experimented with using resources, cooldowns, charges, and combinations of them. I was fine not having the usual resources there. It simplified things a bit. Not that Diablo is all that complicated, but it was nice having one fewer thing to worry about on the smaller screen. It cleans up the user interface.

Speaking of the UI, it’s intuitive and not intrusive. The buttons for abilities and menus don’t cover up too much of the screen. Using the digital analog stick instead of pointing with your finger to move your character also keeps your hand from blocking the game. You can tap the screen to pick up loot, but this action is quick.

The loot is a core part of the Diablo experience. You’re always grabbing new armor and weapons. Diablo: Immortal’s demo did not have the inventory menu in the game yet. Blizzard told me it’s still working on this feature. But a small button will show up if you pick up an item that’s an upgrade. Clicking it equips it immediately. 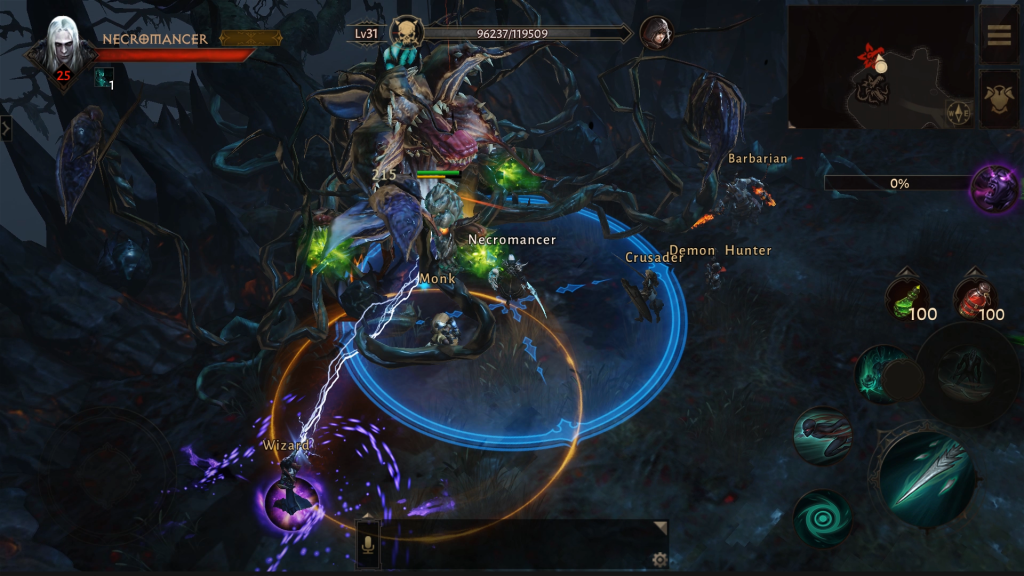 Above: The Necromancer in action.

While running around the world, I actually ran into another world. Multiplayer in Diablo has always relied on grouping up with friends. Before, you wouldn’t just see other players running around. Seeing another character, and knowing a human was behind it, gives Diablo: Immortal more of an MMO feel.

You can also group up for dungeons. When you enter one, you have the option to go in alone or to be paired up with three other players. It’s a quick way to get into cooperative action. Above: Crusader rides a horse.

Oh, everyone is mad, I guess?

My demo was short. I did a quick tutorial, ran around outside a bit, and fought through one dungeon. I still have a lot of questions. Blizzard isn’t talking about how Diablo: Immortal will monetize, so I’m sill wary of obtrusive and pay-to-win microtransactions. But Diablo: Immortal plays well. Gameplay-wise, it’s close to the experience I have playing Diablo III on Switch.

I played my demo before being aware of all the negativity coming from people on social media sites like Twitter and Reddit. Many core gamers will always feel that mobile games are somehow beneath them. But the demo I played showed that the Diablo franchise is a good fit for mobile.

Maybe the angry mob will turn around once it actually plays the game.