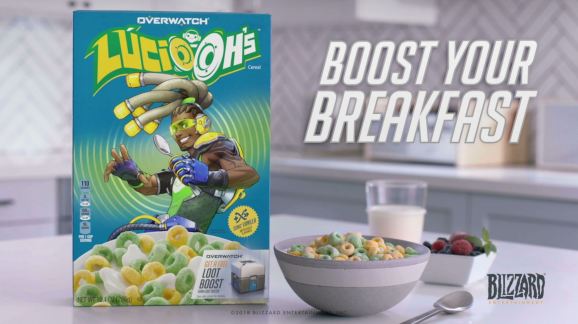 Some people are so famous and talented that they end up on the front of a Wheaties box. But occasionally, someone is so cool that they get their own cereal to themselves. That’s the case with Overwatch hero Lucio, who is part of a complete breakfast.

Lucio-Oh’s are already canon in the fiction of Overwatch, but now they are part of our Earth realm as well. Publisher Blizzard Entertainment has teamed up with Kellogg’s to release the cereal n the United States. They will debut in December. You can order them online at that time — but the company did not say whether the product will end up on store shelves at your local grocery store.

If you do end up getting a box, however, you won’t just get a potentially tasty treat. Blizzard is including in-game items in the box as well.

This is great news for fans of Lucio, Overwatch, and cereal, but not everyone will love this announcement. Lucio-Oh’s represents the end of a campaign of daring grassroots activists who are trying to affect change in the world around them. I’m referring, of course, to the people who signed the Change.org petition to force Blizzard to change the name of Lucio-Oh’s to Luci-Oh’s. And at the risk of losing my impartiality, I must confess that I am one of those people.