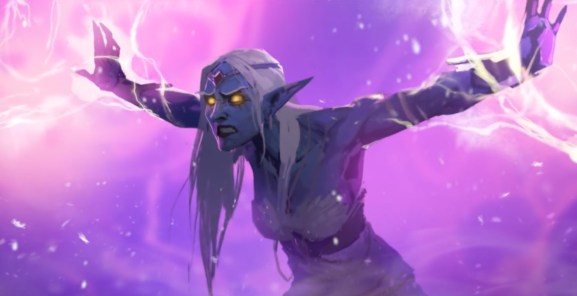 Blizzard Entertainment detailed World of Warcraft‘s 8.2 is a patch during its BlizzCon event today in Anaheim, California. It is called Rise of Azshara, and it will have players travelling to her domain of Nazjatar and fighting the former Night Elf queen and her Naga followers, World of Warcraft’s evil race of snake-like water creatures.

World of Warcraft is amid its Battle for Azeroth expansion, which launched on August 14. The expansion got off to a fast start by selling 3.4 million copies in its first day. That’s a record, according to Blizzard. But fans on sites like Reddit and influencers have criticized the expansion’s progression systems and character balance. The Azerite Armor system, which has players empowering a necklace to unlock traits on certain armor, has been a major focus of criticism.

Battle for Azeroth had Alliance players adventuring in Kul Tiras, while the Horde went to Zuldazar. Now both factions will go to Nazjatar. Having a whole new zone to explore is a major piece of content to introduce in a patch. And a new raid will have players fighting until they reach Azshara herself.

The update is also adding a new dungeon, Mechagon. This is an ancient Gnome city, and the dungeon will be twice as long as normal one. It’s similar to the Return to Kharazan dungeon that released during the last expansion, Legion. Rise of Azshara is also adding new heritage armor for Tauren and Gnomes. Crestfall, which was a map in Warcraft II, will be a new location for Island Expeditions, along with Snowblossom.

Blizzard has made WoW’s 8.1 patch available for testing since September 21. It focuses on a new raid that has players sieging/defending (depending on their faction) the troll city of Zuldazar. This patch will be releasing sooner rather than later, but Blizzard still needs to talk about future World of Warcraft content at BlizzCon. That’s why we’re learning about 8.2, even though it is months away.