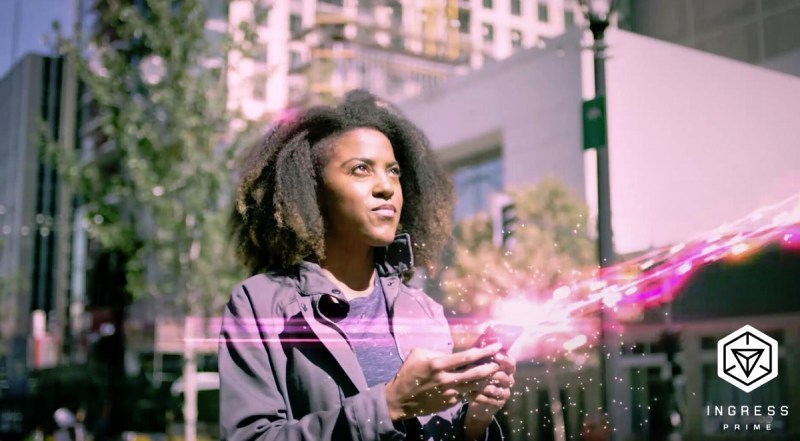 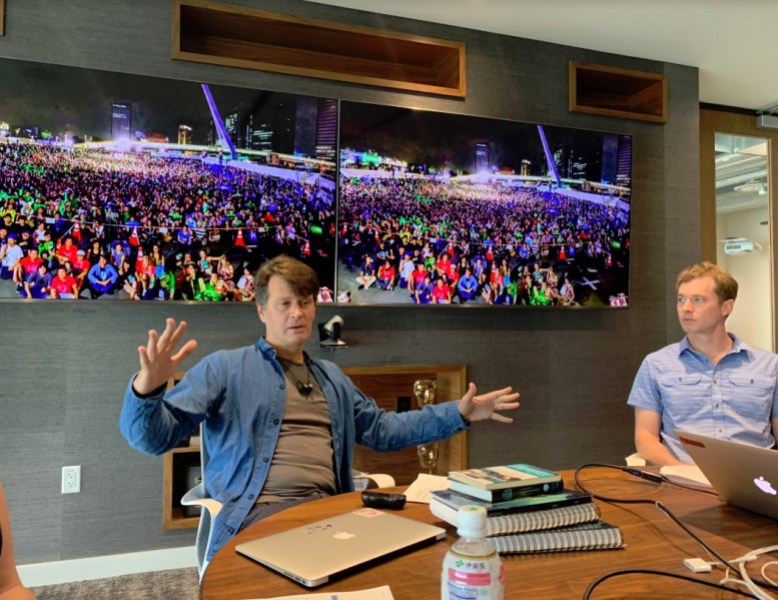 The original Ingress will continue. But the new game features graphics upgrades and other enhancements designed to entice players to switch over. You start out as an agent and choose which side you want to support. The Enlightened (green team) want to take the Exotic Matter (XM) at the public locations such as statues and use it to enhance human kind. The Resistance (blue team) is distrustful of the technology and aims to protect humanity from the new matter. 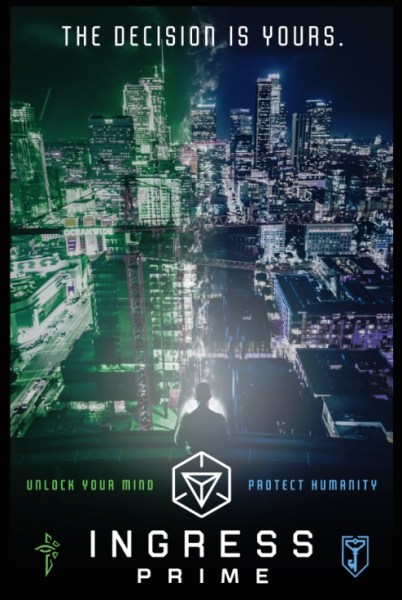 Ingress Prime is built on Niantic’s Real World Platform, which converts landmarks into game locations. Ingress Prime has an all-new story aimed at making veterans of the first game happy, but it also does a better job onboarding new players with tutorials and dramatic story videos. Upon completing training, players must choose a side between and then battle for control of landmarks.

“Ingress was inspired by idea that world is full of interesting places we pass by every day but we don’t always notice them,” said Hanke. “We decided we could we build a game around these interesting places and lead people to them.”

The reboot has been in the works for a while. Niantic announced it was working on it more than a year ago. It built the game from the ground up on the Unity game engine. The user interface has been streamlined to give more info at a glance.

As with the original, the Ingress Prime storyline will evolve and change based on how Ingress agents interact with one another and the outcome of Ingress real world “anomaly” events. The original Ingress had more than 2,000 in-person, real-world events. The game started with hundreds of thousands of locations at the outset, and now it has millions of locations identified in the game. 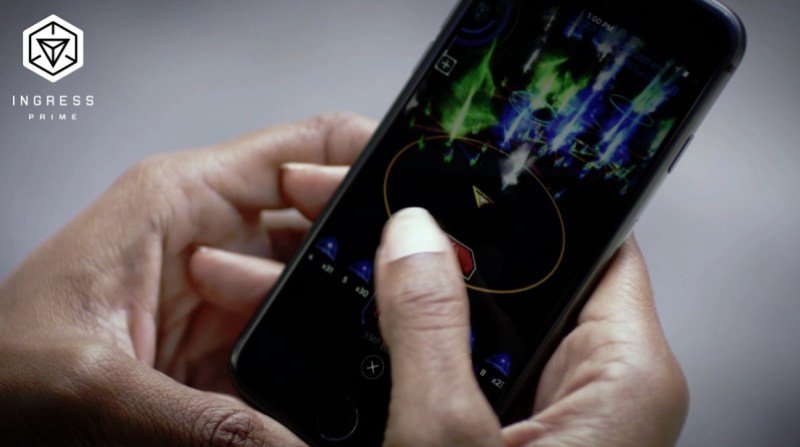 “People have gone to all ends of the earth to capture portals,” Hanke said. “One Russian player went to a military base in Siberia.”

As agents collaborate and compete, the story will expand through a new interactive hub which serves as the entry point into the deep Ingress universe. A new Ingress web series, “The Dunraven Project,” serves as an entry point, fusing narrative and real-world Agent achievements.

The two factions come to life in a new way, as two functioning artificial intelligence entities, with which Ingress agents and prospective agents can interact. They are set to come online shortly after launch and will play a pivotal role.

Niantic’s hallmark real-world “anomaly” events will play an important role in Ingress Prime, putting the outcome of key narrative arcs into the hands of agents. These anomalies bring agents from both factions together for a weekend of competition, exploration, and celebration.

For Ingress Prime, Niantic plans to host 12 large-scale “Primary Anomaly” events (three each quarter in Asia, Europe, and the Americas), along with more than 100 community-driven “Satellite Anomaly” events. The new events kick off on November 17 in major cities around the world including Barcelona, Austin, and Hong Kong. A full listing of events can be found here.

Niantic also commissioned an animated series, The Ingress Anime, an all new computer-generated animated series developed in collaboration with Fuji TV and Craftar Studios in Japan. It will be released worldwide in 2019 on Netflix. The show merges Ingress agents, gameplay, and narrative into a sci-fi adventure thriller and features music from a number of artists including Alt-J. 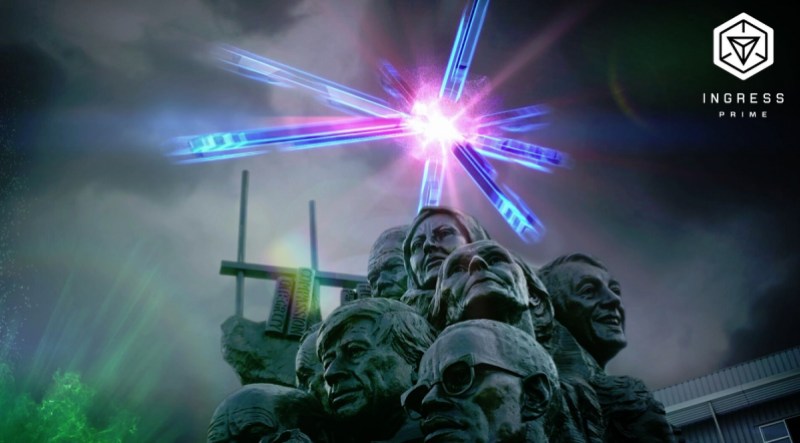 Above: Ingress Prime will give you new reasons to get off the couch.

Ingress Prime includes augmented reality gameplay that the original couldn’t have back in 2012, because it didn’t work on mobile devices back then, Hanke said. He said that Ingress has a worldwide social network of players, and while the first story has come to an end, the new story is picking up where it left off.

“It will let them take portals back strategically,” said Scot Frank, product manager, said in a briefing.

He said the game has been in beta testing with hardcore players. As with Ingress, players can take over portals and connect them in groups of three. The real-world population that is covered in that triangular region influences the score the faction controls.

Niantic senior engineer Niniane Wang said in a briefing that the game combines play with exercise. On average, agents walk three miles during the course of one event. The scores change dynamically, as groups of players battle to influence the outcome. Streets, buildings, and portals are now rendered in 3D, as the new game has upgraded visuals to make players feel more connected to the game, Wang said.

Attacking and defending portals has been streamlined, and you can hear sounds such as battle noises as you approach portals. I played the game on early access, and it looks and sounds like a more modern mobile game.

Players can keep up with the game’s events through the Investigate web site and they can view dramatic story videos such as the Dunraven Project, said Andrew Macintosh, Niantic’s global marketing manager.

Niantic has also produced a couple of narrated tutorial videos. Ada and Jarvis, two AI characters, introduce players to the different factions. The game has monetization via items that you can purchase in the game, and sponsors can adopt locations in the real world where players can congregate.

In 2019, Craftar and Fuji TV will introduce an anime show, Ingress: The Animation in Japan. It will debut on Netflix next year.

“This is just the beginning for Ingress Prime,” said Frank.

And Ingress Prime is like the lead horse for technologies that Niantic can use in all of its games, Hanke said. “The learnings we have from these new features are learnings we will take to all of our games.”

Over time, Hanke said he hopes that AR devices will emerge where people can play games like Ingress Prime. “I’m eager to see AR devices people can comfortably wear outside.”