Gaming brands and media continue to grow via social video as the demand for related content also soars by the month. Numerous media and brand content producers meet that demand, but the numbers show that none are as prolific as IGN. Led predominantly by its YouTube and Facebook channels, the publication continued its rise in viewership in September — a trend that began in July. 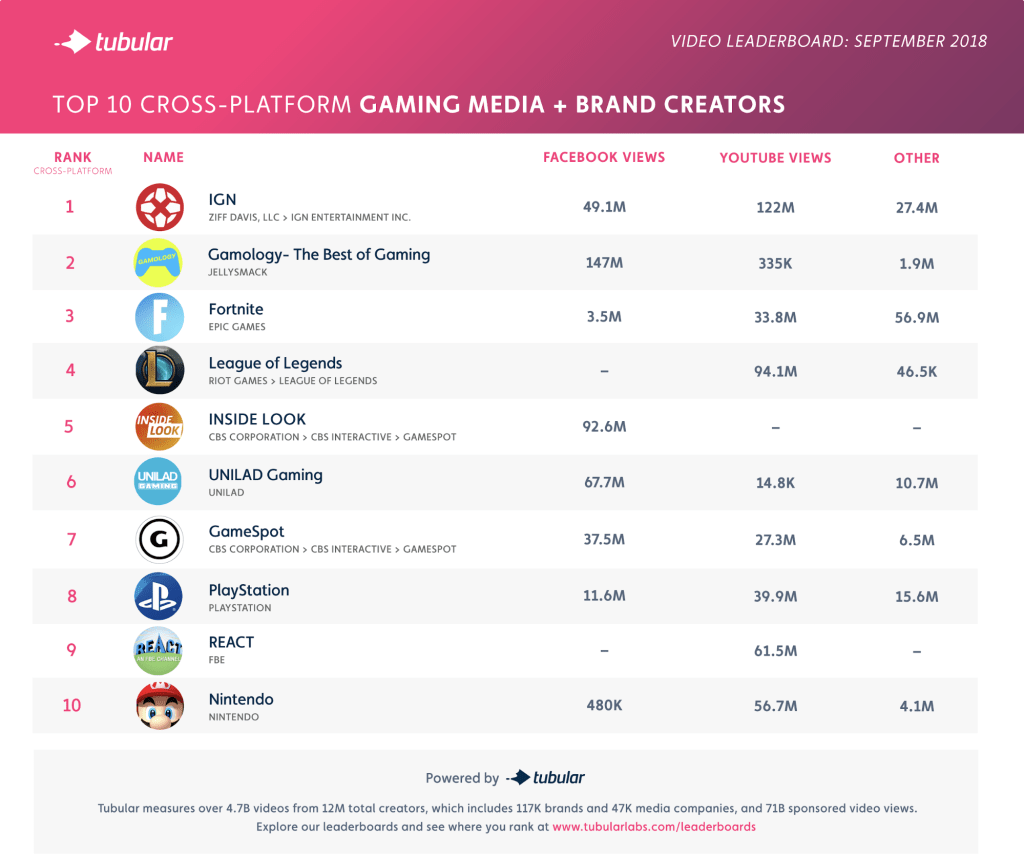 In September, IGN rode a wave of popularity stemming from superhero games and teasers. Its YouTube review of Marvel’s Spider-Man was the most-viewed new video of the month, with 3.2 million views overall and a V7 score (views within the first seven days of publishing) of 2.7 million. Two additional Spider-Man videos were among the top 10 for the month, too: One Facebook video on the weird formatting of the “Boat People” in the game, and an Instagram reshare on Facebook from TheShredItBro.

While IGN cultivates its audience primarily through both Facebook and YouTube, the No. 2 media and brand gaming channel relies almost exclusively on Facebook. Gamology: The Best of Gaming earned 147 million views on the platform in September, and it continued to build its subscriber base there (now above 5.2 million). Two of Gamology’s most popular posts were trailer-related, specifically for Transformers’ Bumblebee and Captain Marvel. Both videos received over 1 million views during the month, with nearly all of those coming in the first seven days.

Given the popularity of Fortnite and League of Legends, it should come as no surprise that both were among the top five channels on this list. For Fortnite, the hype was all about Season 6, with both of its YouTube videos pushing the announcement accumulating a total of more than 5 million views. Despite lowering its investment in YouTube for the month, Fortnite still barely lost anything in terms of overall view count (thanks to its ballooning Instagram presence).

On the other hand, League of Legends saw a surge in September YouTube views, up from 81.8 million in August to 119 million. Its “Rise” music video with The Glitch Mob, Mako, and The World Alive had a V7 of 15.7 million, and notched nearly 45 million views overall on YouTube — with another 1.8 million on Facebook. Three additional videos had V7 scores of 3 million or higher, including “Just One More” (8.2 million), “Welcome Aboard” (3.3 million), and “Duo” (3.3 million).

Looking at gaming as part of the larger pop culture conversation, GameSpot’s Inside Look channel was fifth, though it dipped from 127 million views in August to 92.6 million in September, all using Facebook exclusively. Gamespot, primarily using both Facebook and YouTube, saw total views dip as well in September (now below 75 million). Two Gamespot videos had V7 scores of more than 1 million on the month: a meme about Sony agreeing to cross-play (1.8 million) and a Death Stranding trailer (1.6 million).

PlayStation saw a big boost for the month, adding 8 million views on YouTube and 5 million on Facebook compared to August. Much of that was led by Spider-Man, as well as various videos for the PlayStation Classic announcement. Nintendo also continued its steady three-month growth curve, tacking on an additional 5.1 million YouTube views in September. The most popular new videos for the month were its Fortnite Season 6 trailer (V7 of 5.2 million) and its extended video on Nintendo Direct (2.6 million).