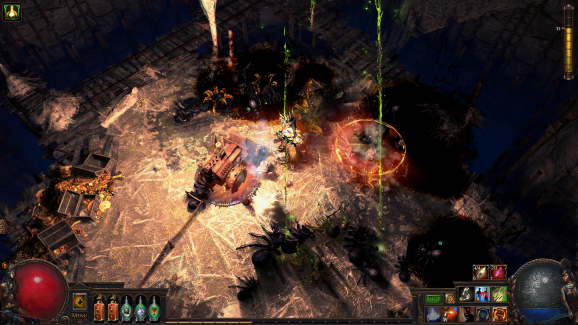 Developer Grinding Gear Games announced today that it is bringing Path of Exile to PlayStation 4 this December.

Path of Exile is an action role-playing game that first came out for PC in 2013. The free-to-play title released for Xbox One in August 2017. Path of Exile has attracted over 20 million players around the world.

The game looks and plays much like Blizzard’s Diablo series. When Diablo III disappointed some fans of the series with its different take on progression, Path of Exile (which is more similar to Diablo II) became a popular alternative when it launched. Now that Diablo IV is further on the horizon than some thought, Path of Exile can continue to be a home for those wanting a Diablo-like experience that is receiving consistent updates. The expansion to PS4 will open the game up to even more players.

Path of Exile is free-to-play, but it avoids pay-to-win systems. You can spend real money on cosmetic items or services like additional character slots.

Diablo III is also available on PlayStation 4 and Xbox One, along with Switch. Path of Exile is not coming to Switch yet.