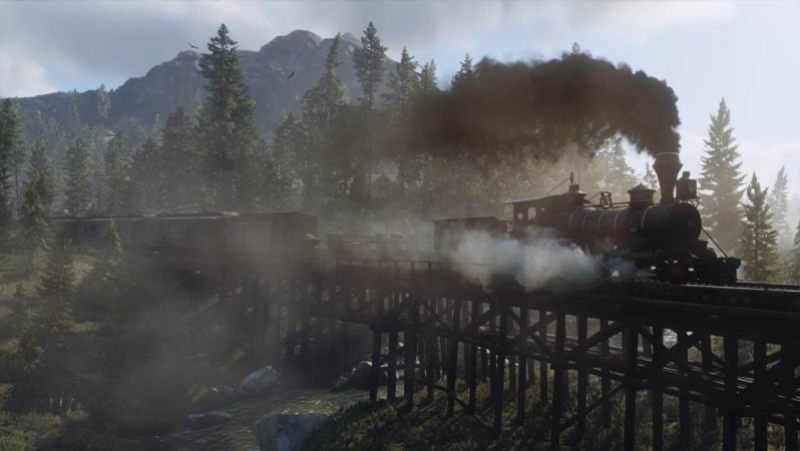 Above: Get on the train!

It wouldn’t have killed Rockstar to put better fast travel into the game. Its system isn’t fast at all. And with a map as huge as Red Dead’s, it’s a form of insanity not to make a way for a player to get from one end of the map to another to start the next mission.

Train stations are a place where you can fast travel. But the tickets cost money. The stations aren’t always near where you want to go. And here’s the killer: If you take a train somewhere, you leave your horse behind. So when you arrive at the train station, you either steal another horse, or you walk. I never once took a train for this reason. And it cost me hours and hours of extended riding through the country. In a 50-hour game, that is maddening.

So many other things slow you down. You track animals in slow motion. If you want to shave your beard off, you have to do it. If you want to move from one side of the camp to another, you can’t run. With so much emergent gameplay, I can see why Rockstar didn’t want to use fast travel. But they should have left the choice of using it up to the players.

Just when you think that you’re not in a video game, and this all seems so real, little bugs remind you that it’s not perfect. I parked my horse, and its head became stuck in a tree. My wagons became inextricably stuck in rock formations. One of my horses died because it was stuck in a rock. I tried to dock a boat alongside a ship, and it didn’t work. The horses have a habit of shaking back and forth, as if they were stuttering.

It’s a big game, and a lot of the animations don’t look polished. Pathfinding is difficult, and so you rarely see all of the gang members together on missions. Usually, it’s just a couple of characters involved in most of the journeys. Every now and then, the targeting system seems really slow, like early in the game when you have to shoot a bunch of wolves. These flaws knock you out of the fantasy. Fortunately, if you think of the bugs per area of the game, or bugs per hour of gameplay, they are surprisingly rare.

Some missions just waste your time 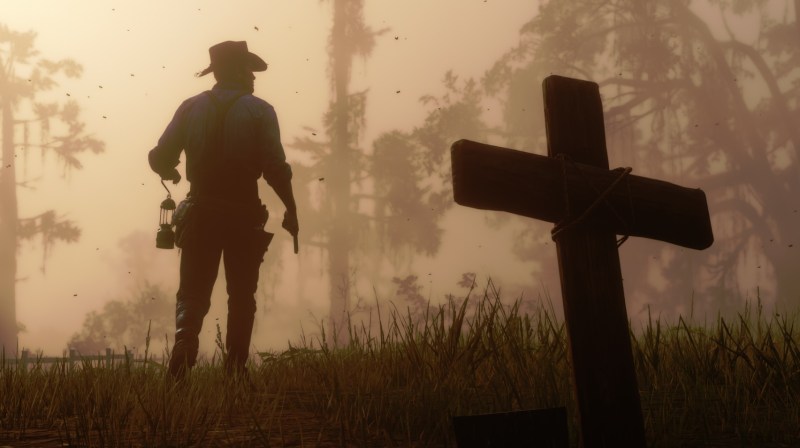 Above: Nope. Not dead yet.

One of the gang members Lenny comes rushing into camp, saying that Micah has been arrested and may be hanged. So Dutch tells Arthur to go out and rescue Micah. But first, Dutch says Lenny is so shaken up that Arthur should take him to the saloon to get drunk first.

So they go get drunk and you waste a bunch of time, where Arthur can see straight and he has to search through the whole saloon to find someone who looks like Lenny. This happens several times, and you finally pass out and wake up.

Meanwhile, Micah is just sitting in the jail in another town, awaiting a hanging or a rescue. I have no idea why this mission made the cut among the 105 mostly purposeful missions. I suppose it tells us something about the outlaw life — getting drunk. But it was painfully drawn out and not funny. This is one of those cases where you wish you could take control of the story, rather than have Rockstar control it for you.

Your horse can be hard to control 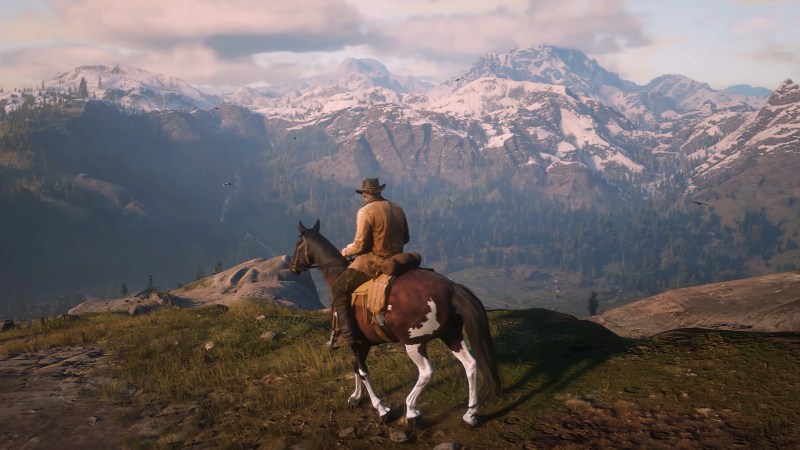 Above: Don’t jump off the cliff, horse.

It’s hard to avoid pedestrians sometimes. You hit them with your horse and cause a major incident. Other bystanders will report you for an unarmed assault, and the law will come after you. They may kill you, or you may kill them. But either way, you will end up with a bounty on your head.

And when you are riding fast through the wilderness, you occasionally will be unhorsed as you ram straight into a big rock or tree. This is a major unintended consequence of having realistic physics in the game. You can’t just put the brakes on the horse or your wagon easily, or turn on a dime, the way you can in Rockstar’s Grand Theft Auto games, where vehicle maneuvering is a lot more precise. I would have preferred no consequence at all for bumping into a rock.

I got bounties on my head — or shot a few times — because I accidentally ran my horse into the people who were passing by on the narrow dirt trails of Red Dead Redemption 2. I also shot a horse out from under someone who was fleeing. That saved me from having to shoot the guy, but it mean that I later had a bounty on my head for animal cruelty.

This taught me to be more careful, because the world reacts to my ineptitude, but I wished I could rewind these actions so that they weren’t so consequential. For instance, one of these simple screw-ups led me to losing my horse, which is like losing a character in the game. You can invest a lot in your horse, and if you lose it, you’ll feel sad. So steer it wisely.