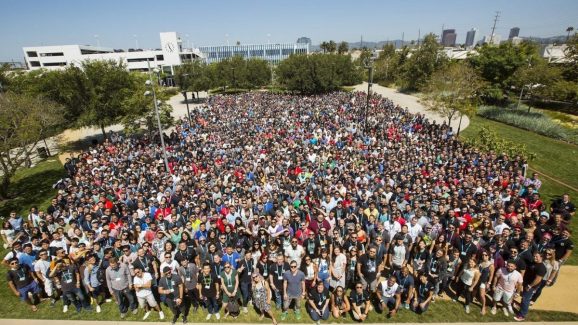 The employees of Riot Games .

Riot Games is facing a class action lawsuit for gender discrimination at the publisher of League of Legends, one of the biggest games in the world and a leading esport.

Kotaku reported the lawsuit first, which comes three months after it posted an investigation about the sexist culture at Riot Games.

One current employee, Melanie McCracken, and one former employee, Jessica Negron, sued Riot, alleging that the plaintiffs have been denied equal pay and had their careers stifled. Riot has more than 2,500 employees, 80 percent of them male. The suit alleges Riot violated California’s Equal Pay Act law against gender-based discrimination at the workplace.

A spokesman for Riot Games responded, “While we do not discuss the details of ongoing litigation, we can say that we take every allegation of this nature seriously and investigate them thoroughly. We remain committed to a deep and comprehensive evolution of our culture to ensure Riot is a place where all Rioters thrive. We’ve shared our progress here.”

Some of the charges in the lawsuit mirror what Kotaku wrote about, as well as news that surfaced later, such as former CEO and cofounder Brandon Beck saying at a company event, “no doesn’t necessarily mean no.”

But there are also new allegations in the lawsuit. After a Riot Unplugged meeting on August 16, a female staffer sent a company-wide message saying, “That was not enough for me.” And at a company forum, Marc Merrill, cofounder of Riot Games, admitted fault and began crying in front of an audience of employees.

Asking for class action status, the plaintiffs asked the court for compensation on unpaid wages, damages, and other penalties.

Kotaku said that Negron participated in its original story. In the lawsuit, the women allege that Riot’s obsession with its culture of “core gamers” led to a culture and recruiting system that was biased against women.

After the Kotaku story ran, Riot apologized to current and former employees, and it promised to make sweeping changes. But Kotaku said a number of those accused of inappropriate sexual behavior are still employed at Riot. The suit alleges that Riot paid men more than women for the same work.

Negron said in the lawsuit that shortly after she was hired, her manager quit and she took on her job duties without any compensation or a change in job title. She was paid $56,000, but she was doing the work of a male colleague who had been paid $160,000. She was passed over repeatedly, for the same position that she was already performing, Negron alleged. Negron also said she counted the word “dick” spoken more than 500 times in a month by male employees at Riot. When Negron resigned in April 2017, she was making $59,000 a year.

Current Riot employee Melanie McCracken has worked at Riot since 2013. She said she was denied promotions, punished by male leaders, and refused proper compensation. She was appointed an office manager job in 2015 and received a promotion to a senior job in 2016. After she was reassigned to report to a man whom she had complained about for his inappropriate behavior, she was given a five-month countdown to find another job within Riot or be fired.

In 2017, McCracken was promoted to a position where she worked for Riot Games’ top three leaders, COO Scott Gelb, CEO Nicolo Laurent and president Dylan Jadeja. She reportedly saw a video of Gelb in Shanghai with some scantily clad dancers. The video spread in the workplace, and McCracken alleges she was was punished for it.