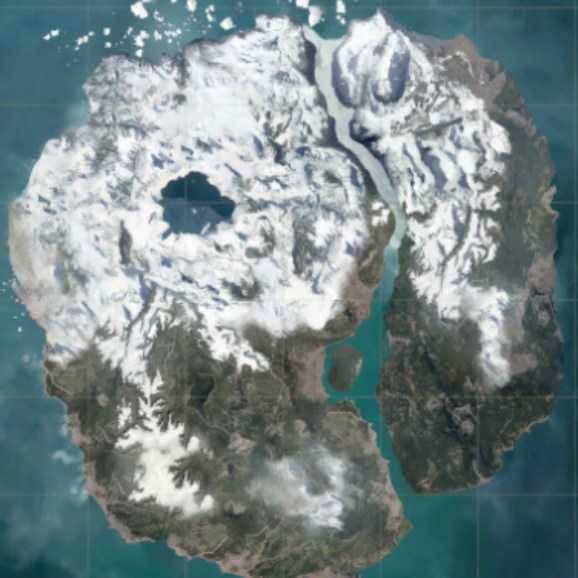 A satellite view of the new Dihor Otok map.

Creating a map for PlayerUnknown’s Battlegrounds is a monumental undertaking. The standard size for these zones is 8 kilometers long-by-8 kilometers wide. That’s a 64-square kilometer space that The PUBG Corporation needs to pack with interesting locations. And the job of overseeing that production belongs to PUBG world-art director Dave Curd, who I spoke with in late October.

Here’s how he explains the big responsibilities of his job.

“The first thing is overseeing visual development of all the map creation,” said Curd. “That is everything from the color palette, the trees, the rocks, and the architecture — what the ‘uniques’ are. Just meat and potato art director stuff. But then there’s also a lot of mentoring, managing, coaching, working directly with all of our environment artists, creating paintings, a lot of reference gathering, and as you’d expect a lot of meetings.”

Too big to micromanage

So a lot of Curd’s job is ensuring that everyone works toward a similar goal. But that isn’t necessarily just making decisions or approving assets. A 64 square kilometer map is too large for one person to micromanage. And that starts from the top with the Korean leadership of The PUBG Corp. It recognizes that it needs to give Curd freedom to get work done.

“I came up in traditional western triple-A development at Raven Software,” said Curd. “Really, PUBG has trusted the PUBG Madison studio to innovate and vanguard and try new stuff. … If we were all tied up and bound by meetings, you’d never get an 8 by 8 kilometer map done. There’s too much to do, too much to suss out, too many decisions to be made, too many towns to be designed. You have to have the freedom to get loose, to fail, to innovate, and to try new stuff.”

And since PUBG is a live-service game, the development team can do something about its failures. Curd says that he thinks everything in the last-player-standing shooter is on the table for improvement.

That means making tweaks to a widely beloved map like Erangel, but it also means addressing the criticism of a divisive map like Miramar. The PUBG team launched that desert map as the followup to Erangel last December. Following that release, many fans called out their issues with the dusty, open environment.

And Curd notes how the team has responded by making changes.

“The big thing in Miramar, between how it initially launched and where it is now, is we’ve simplified the layouts where we could,” said Curd. “We also offered a bit more verticality. In some of our taller buildings, there’s not just staircases. There are holes in the floors. Then we’ll pile up little filing cabinets and stuff for players to climb through, so there’s more than one way to clear a room.”

Tighten up the graphics on level 3

In addition to design changes, Curd says his team will always try to work to make the game look better overall.

“We’re always looking at increasing our visual fidelity,” said Curd. “Whether that’s revisiting props or–we saw Korea add some really fun weather settings to Miramar, which I thought was really cool. Again, that’s the joy of that forever-on persistent game. We have so much freedom to keep tweaking and pushing and trying to make it better.”

And with PUBG still attracting hundreds of thousand of players each day, the studio should continue to make improvements and introduce new stages for the foreseeable future.

If you want more insight from David Curd about creating the maps for PUBG, click to the next page to read the edited transcript of my interview with him.