iRobot’s Roomba. Neato’s Botvac. Samsung’s Powerbot. Those are just a sampling of the dozens of robot vacuum cleaners on the market, sales of which are fueling an industry expected to be worth $4.43 billion by 2023. But that hasn’t deterred Trifo, a two-year-old home robotics startup backed by Samsung Ventures, from pursuing a spot among the incumbent dustbusters.

“Trifo has created first-to-market integrated hardware and software that enables dramatic performance improvements in home robotics,” Ge said. “I look forward to leveraging my experience and expertise to move the company forward rapidly to gain revenue and share in the fast-growing home robotics market.”

In a phone interview with VentureBeat last week, CEO and cofounder Zhe Zhang said that the company will use the capital for research and development and to launch its first product: an end-to-end integrated hardware/software autonomous home robot platform with sophisticated sensing capabilities. 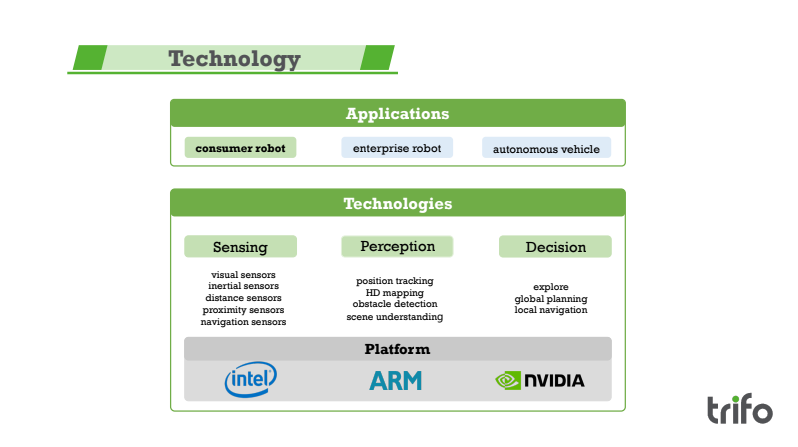 “Robot vacuum cleaners are currently the only home robots on the market, and unfortunately they are not as smart as people think,” said Zhang, who has a PhD in robotics from the State University of New York at Stony Brook and previously led projects at Microsoft Robotics and Magic Leap’s mapping and positional tracking team. “A true home robot has to have an advanced level of perception and be capable of interacting with occupants. Products in the market today are designed for a single function and are not intelligent enough to learn to perform other complex tasks for chore automation.”

Zhang claims that Trifo’s tech is different. He described it as “full stack” made up of three core components: sensing, perception, and decisioning. It’s the evolution of the company’s $399 Ironsides perception system, which runs Robot Operating System and packs a multi-core ARM chip, calibrated stereo cameras, and a six-axis inertial measurement unit.

For the better part of two years, Trifo’s 40-person team of engineers and software developers — some of whom hail from Intel, Bosch, and GE — have honed in on the sensing part of the equation, developing vision tracking and navigation algorithms and getting a supply chain in place for cameras and other sensors. They’ve been filing patents, too — to the tune of 40 in the U.S. and China, with 70 additional patents awaiting review.

The bulk of the software, design, manufacture, and sales work has been split among Trifo’s Beijing and Shenzhen offices, Zhang said, with the algorithms and software falling to its Silicon Valley employees.

On the hardware end of things, Trifo’s system has a processing component powered by system-on-chip offerings from Intel, ARM, Nvidia, or a mix of all three — the company is not going into specifics just yet. In addition to cameras, there are at least a few proximity, inertial, and sonar sensors (but not lidar or radar) onboard, which enable features like HD mapping, environmental perception (temperature and humidity), and obstacle detection.

According to Zhang, the robotics dev kit can localize itself in environments that it has seen before; if you pick it up, cover its vision sensors, and plop it down somewhere else, it’ll recognize the room by its surroundings and dimensions. That’s thanks in part thanks to its simultaneous localization and mapping (SLAM) tech, which Zhang characterized as “state of the art.”

“A typical room environment is 2,500 square feet or larger, and in that environment, the accuracy [of the 3D map points generated by our system] is 1 percent error of the distance,” he said.

It’s also self-improving. Offline, on-device machine learning algorithms enable the system to improve its understanding of the furniture, walls, and other objects around it by drawing on 3D geometry maps and vision data.

Trifo isn’t the only company tapping machine intelligence to map apartments and houses, of course. Neato earlier this year announced the Botvac D4 Connected and Botvac D6 Connect, both of which use lidar sensors to detect nearby obstacles. And in September, Dyson announced the 360 Heurist, an autonomous vacuum cleaner with a night vision- and laser-equipped navigation system.

But the platform’s real advantage is its cost savings, Zhang said. Dispensing with costly components and investing heavily in computer vision enabled Trifo’s engineers to build a vacuum that’ll deliver the same experience as far pricier products, he claims.

“If you are using [something like lidar] to localize [the robot], it’s comparatively easier [than] passive hardware like cameras,” he said. “But we took the challenge of [combining] low-cost sensors to try to make the system robust.”

Pivoting is easier said than done, of course, especially considering the competition. Zume Pizza, Creator, Miso Robotics, and Chowbotics have the service industry locked down with their pizza-tossing, burger-flipping robots. In the retail fulfillment sector, InVia Robotics and Commonsense Robotics are already tapping robots to accelerate shipments.

Zhang is well aware of the challenges ahead.

“A lot of position-tracking, mapping, [and other technologies] can be applied to different scenarios,” he said. “Autonomous vehicles are another area that we feel is definitely useful … but it’s from a different perspective and requires a different set of optimization[s] … The optimization and software stack has to be end to end — that’s why we’re currently focusing on a home consumer robot.”

With any luck, Trifo will succeed where Bosch’s shuttered robot spinoff Mayfield Robotics and Honda’s cancelled Asimo program failed — and perhaps capture some of the $900 million venture capital committed to industrial and personal robotics startups two years ago.