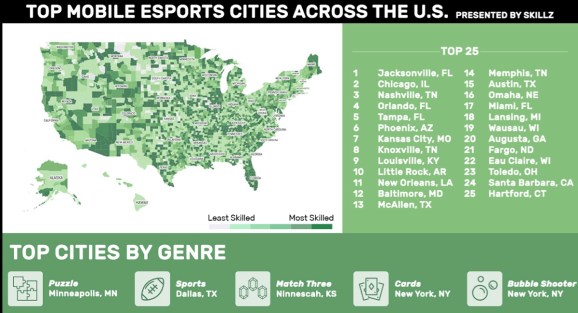 Skillz identified the top mobile esports cities in the U.S.

Mobile esports firm Skillz released data today that shows where the most skilled mobile esports players live in the U.S. And the study shows that Jacksonville, Florida, is the top city, followed by Chicago and Nashville, Tennessee.

Mobile devices are now in the hands of 4 billion people around the world, and Skillz is betting that mobile will become the biggest platform for esports over time. Skillz is running two million mobile esports competitions a day, and its revenue run rate is above $400 million.

All four major U.S. regions were represented in the list, with three of the top five cities located in Florida
alone, and the South claiming 14 of the top 25 rankings. The Midwest had a total of eight cities on the list, followed by the West with two cities and the Northeast with one.

The top players by esports genre come from diverse areas of the country. The best puzzle, sports, and
match-three players hailed, respectively, from Minneapolis, Dallas, and Ninnescah, Kansas.

Both the best bubble shooter and card players are from the state of New York.

“Skillz has a fantastic user base, and the games really allow you to show off your skills against other competitors,” said Travis Wood, a player hailing from the No. 26-ranked city of Appleton, Wisconsin, in a statement. “The Ticketz system also has some great prizes to work toward, on top of the prize money I’ve won so far.”

The rankings for the top cities were calculated using the company’s patented skill rating systems, designed to provide players with fun, fair competition. The unique and comprehensive rating technology differentiates Skillz by collecting and analyzing over 50 data points per minute in real time during live gameplay.

The Skillz platform has been built to enable a balanced tournament environment for players at every skill level.

“Exceptional athletes can come from any geography, and eSports competitors are no exception,” said Andrew Paradise, CEO and founder of Skillz, in a statement. “Skillz empowers anyone to demonstrate that they are a champion, through the democratizing power of mobile gaming.”

More than 18 million gamers use San Francisco-based Skillz’ platform for mobile esports, as do 13,000 game studios. Skillz was founded in 2012.