GamesBeat: That’s also separated from this Games for Impact award, which is more about developers?

Keighley: That’s right. We’re very proud of the Games for Impact award, which recognizes developers who make games that have social meanings and messages. That’s part of looking at the industry and this award show and making sure that we represent the industry in the right way to the broader community. We have an obligation now, because so many people watch the show—we should absolutely celebrate the biggest games of the year and the most commercially successful games, the most critically acclaimed, but a lot of other work deserves to be recognized and discovered.

A lot of people come up to me and say, “The Games for Impact nominees, I didn’t even know these games existed. Then I went and found them on Steam and that was really interesting.” We do a lot of work to discover those games. A nomination in that category can make a massive difference for those creators. Some of the moments we’ve had a few years — like That Dragon, Cancer a few years ago, when that received the award — we had a very moving speech from Ryan Green talking about that game. That’s the kind of thing I’m proud of. Winning an award, for some of these big games — God of War, Red Dead, Fortnite — I mean, they’re all doing great already. But something like the Games for Impact award can make a huge difference. 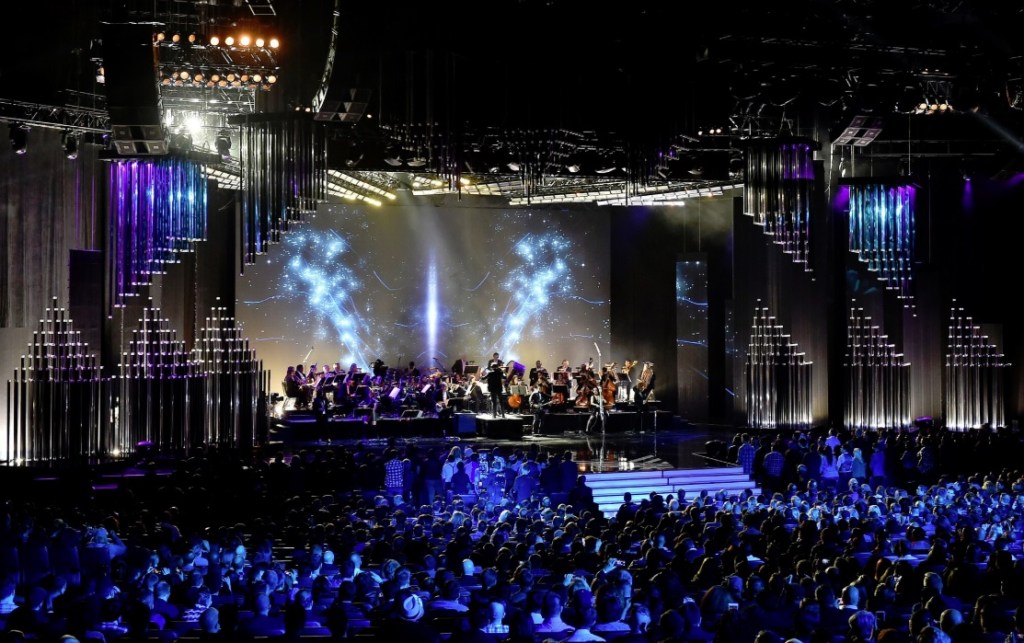 Above: The Game Awards

GamesBeat: It seems like your big moments usually have something to do with Hideo Kojima.

Keighley: Ah … yeah. He’s always there in some form. But we haven’t said anything about the world premiere part of the show. One thing that’s important to me is that when we first start talking about the show, we focus on the awards. People always ask me on social media about what’s going to be announced, what’s going to get shown. I think we have a good enough history of debuting new games and announcements that people can expect that. But as far as specific content that’s going to be at the show, we’re not talking about that yet. As we get close to show we’ll share some things, although honestly we won’t talk about what are in effect surprises for the show.

But yeah, Kojima has been a great friend of the show over the years. We’ve shown, I think, two or three years of Death Stranding stuff. We have amazing developers across the industry now that support us. This year there was quite a runoff, with a lot of games that wanted slots to be part of the show and share new content. Another thing you’ll see this year — yes, we have new game announcements, but we also have a lot of ongoing games. People keep playing games as services, and they’ll have updates around new content and features that may get revealed at the show. Maybe it’s not a new game announcement, but it’s something that will matter to a massive player base around the world. That’s new and evolving.

Last year, with PUBG, we announced Miramar, their second map. We revealed that at the show. That was a big moment. I think you’ll see more of that kind of thing with a lot of different games this year.

GamesBeat: What’s the behind-the-scenes story like, as far as what it takes to put on the awards? How many people get involved?

Keighley: The Game Awards end up taking about half my year to do. I focus on E3 up through the summer, take a break for a couple of weeks, and then go right into the Game Awards. Sometimes I’ll meet folks in early fall and they say, “Oh, you’ve gotta start working on the Game Awards soon.” It really is a year-round process. I’m traveling to visit pretty much every game publisher in the world — Asia, Europe, America. In the summer we’re meeting people and talking about what they want to see in the show, starting to build the program from there.

We have a core team of four or five people that work on the show for the better part of half the year. The team eventually scales up into the hundreds when you add all the technical and camera people and everything that get involved in the show. It takes a lot of people to get together on site and put together a multi-million-dollar award show. But the core team is really a group of people that are really passionate about doing what we’re doing. It’s still an independent entity. We keep it small and tight. We focus on the games we want to show and the way we want to show them.

For me, I’m very passionate about the opportunity I have to build this show. I give it my all to focus on every little moment, trying to engineer it in a way that will represent our industry properly. We won’t always get there, because so many factors play into this. But generally, across a two-hour award show, we think a lot about the right content, the right sponsors to involve, all of these things. Some years there will be things like, famously, the Schick Hydro razor that people take exception to, and we get it.

I think we’re evolving now. We’re trying to get better. We have better sponsors wanting to get involved in the show and add value. It’s just something that evolves over time. I’ve learned that you have to be patient, year after year, to get the audience to believe in the longer-term vision of where it’s going to go. I’m trying to build something that stands the test of time. It’s not just about doing it right this year. It’s about how, in 10 or 15 years, we can still make this a ceremony that gamers are proud to be a part of. 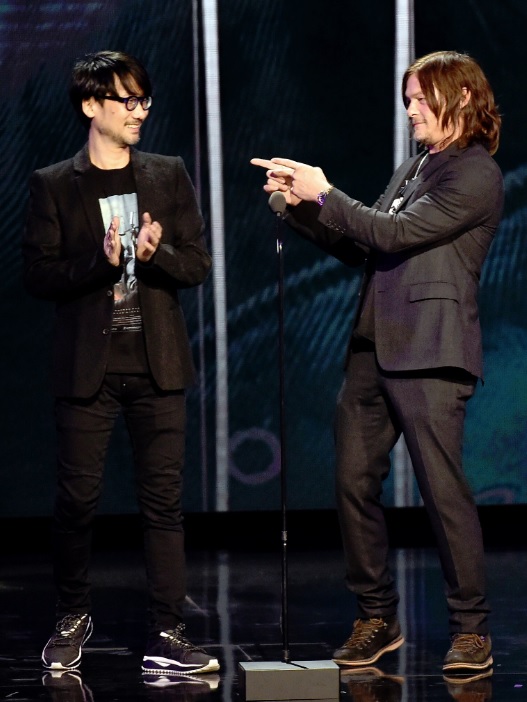 Above: Hideo Kojima and Norman Reedus at The Game Awards.

GamesBeat: Do you have a general budget figure, something to give us a sense of the scale?

Keighley: I probably shouldn’t say anything specific, but it’s in the millions of dollars as far as cost to mount the show every year.

GamesBeat: What’s the venue this year?

Keighley: The Microsoft Theater. For us it’s very important that we do it at the scale of other major industries. That’s where the Emmys are done every year. It’s important for us to do something on the scale of other entertainment media, because gaming is the largest form of entertainment in the world. Our award show should be just as big as anything else out there.

It’s not just about the size of the venue. It’s also the scale of the production. Most of the people that work on our show are folks that work on other major award shows, concert tours, things like that. Our set designer, LeRoy Bennett, does Paul McCartney’s tour. He does The Weeknd’s tour, and Lady Gaga. We work with some of the best people in the entertainment business to bring our show to life.

GamesBeat: You’re going to have lots of entertainers again, I take it?

Keighley: That stuff is always harder to know before we get closer to the show, but yes. We like to have entertainers, boldface names, when they really want to be there because they love games and love this industry and respect it. That’s what I’m proud of. Anybody who walks out on that stage wants to be there because they love video games. Whether it’s Zachary Levi or Guillermo del Toro or Andy Serkis or Norman Reedus, these are all folks that respect gaming and are involved in the industry, or want to be a part of it in some way.

I’m very happy having lots of great game developers out there now. I think there’s also the possibility to have a lot of content creators presenting, and other game creators. The neat thing about our show is that it’s an eclectic mix of all these things coming together. I’m proud of that. Just like what we do at E3 Coliseum, where we can have the creators of Westworld and then Todd Howard and all these interesting folks in the mix there, we have a similar thing with the Game Awards.

Yes, there are talent names tied to the show. But we’re not wedded to that. Our ratings are not really driven by that either. Gamers are tuning in to see games. If there are also some cool people from popular culture there that add to the evening and the stature of it, amazing. But it’s different from a TV awards show where we have to announce the cast of the hottest new series of the fall being there to drive awareness. That’s not how we think about things. 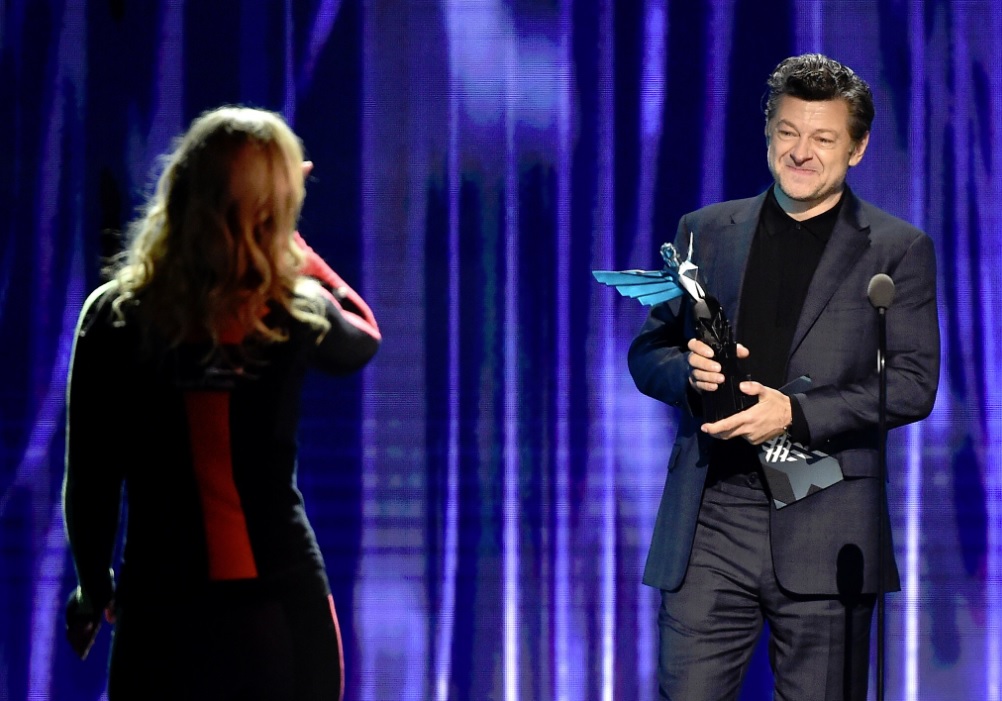 Above: Andy Serkis at The Game Awards.

GamesBeat: What do you think about the edges of the industry now, the places where it’s expanding? We have mobile games, AR and VR, esports, blockchain technology. Does any of this seem like it’s going to become relevant to your core audience?

Keighley: We think a lot about that. There are more opportunities, especially in the mobile game space. We’re seeing a lot of mid-core games with incredible graphics and incredible content, with more appeal to our audience. Mobile is something we’ve looked at increasingly, how we can debut things. We’ve looked at games like thatgamecompany’s new title Sky. You look at a game like that, you don’t even know if it’s running on a console or PC or phone. It’s so beautiful. Artistically, there’s a lot of interesting stuff happening in the mobile space that we think will continue to cross over into our world.

AR and VR, there’s opportunity there for sure, to cover that content. The challenge for us is that it’s still a limited audience that gets to see and play it. I don’t think we’re at a point yet where a VR game could be up for Game of the Year. But the fact that there are more games coming into the market on more platforms is good for everyone. Free-to-play games grow the pie. Everyone who’s coming in to play Fortnite this year — yes, there are some core gamers there, but I know anecdotally that a lot of people who don’t traditionally play games are playing Fortnite. I would selfishly hope that some percentage of those people might be keen to watch something like the Game Awards and learn more about the industry and get excited about where games are going.

That’s been one of the biggest revolutions: lowering the barrier to entry. One of the things about the Game Awards, when I conceived it back in 2013 — I really wanted it to have no barrier to entry. It was free on every device and every platform. You didn’t have to have a subscription. You didn’t have to log in and authenticate an account. You could do whatever you wanted to do to get access to it. In many ways the show is designed like these free-to-play games, where you can access them however you want.