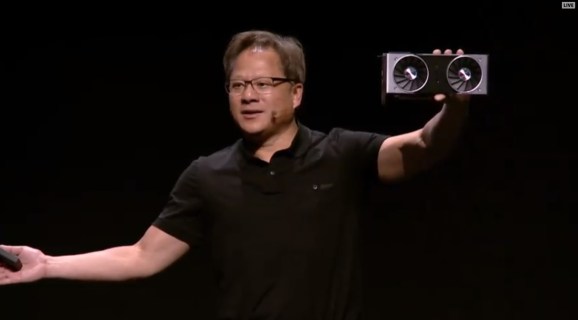 Nvidia reported that its gaming revenue in the quarter was $1.764 billion, down 2 percent from $1.805 billion in the prior quarter and up 13 percent from a year earlier.

But Nvidia said it had record revenue in its datacenter, professional visualization, and automotive platforms. Overall revenue was up 21 percent from the prior year, so the problem is more one of expectations than anything else.

“AI is advancing at an incredible pace across the world, driving record revenues for our datacenter platforms,” said Jensen Huang, founder and CEO of Nvidia, in a statement. “Our introduction of Turing GPUs is a giant leap for computer graphics and AI, bringing the magic of real-time ray tracing to games and the biggest generational performance improvements we have ever delivered.”

He added, “Our near-term results reflect excess channel inventory post the cryptocurrency boom, which will be corrected. Our market position and growth opportunities are stronger than ever. During the quarter, we launched new platforms to extend our architecture into new growth markets — Rapids for machine learning, RTX Server for film rendering, and the T4 Cloud GPU for hyperscale and cloud.”

In an email, analyst Patrick Moorhead of Moor Insights & Strategy said, “Nvidia had a really good Q3/19, revenue and profit-wise. The big revenue growth was in gaming, pro visualization (workstation), datacenter (ML, VDI), and auto (SD). The original equipment maker and intellectual property revenue was way down due primarily to cryptocurrency declines. Nvidia is saying there was a lot of Pascal inventory, likely due to over-ordering during the crypto-boom where gaming customers were ordering two to three times of what they needed to assure supply. This makes sense to me as AMD experienced the same phenomenon when they reported. I have no question that is a short-term [blip] that will be quickly corrected.”