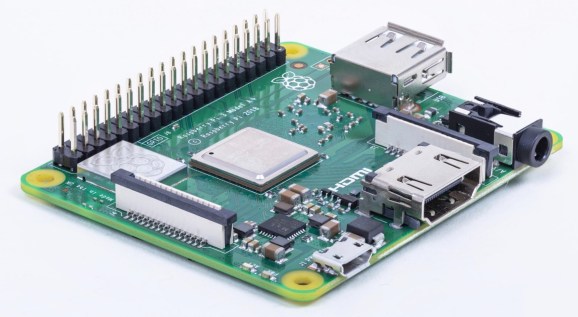 The Raspberry Pi 3 Model A+.

For years, the Raspberry Pi Foundation has churned out two primary types of small computers: less powerful ones sized like a deck of cards, and more powerful ones closer to two card decks stacked up. Today, the Foundation has worked its magic once again with the release of the Raspberry Pi 3 Model A+, which brings the horsepower of its most recent two-deck solution into a much smaller form factor.

Beloved by hobbyists, the earlier Raspberry Pi 3 Model B+ is a full Linux-compatible computer with a 1.4GHz 64-bit quad-core ARM Cortex-A53 processor, dual-band 802.11ac Wi-Fi, Bluetooth 4.2, an HDMI port for video, and a micro SD slot for storage. The Model A+ preserves all of these features, making only one key spec change: It includes 512MB of LPDDR2 RAM, rather than its predecessor’s 1GB.

Wired connectivity has also been compromised: the Foundation has dropped the Ethernet port entirely and cut four USB 2.0 ports down to one. But it has preserved GPIO, display, camera, and 3.5mm connectors, as well as a micro USB port for power — it still requires 2.5 Amps of power.

It’s worth noting that the Raspberry Pi 3 Model B+ has proved to be a highly capable computer, with enough horsepower to emulate Sony PlayStation games, and even some Nintendo 64 and Sega Dreamcast titles. The same power can be used to run web browsers and numerous Linux apps. Apart from limiting the number of wired input devices that can be connected at once, the smaller Model A+ doesn’t really compromise those capabilities.

The key for DIY computer makers will be Model A+’s ability to squeeze into ultra-small enclosures. Collectively, the component reductions enable A+ to shrink to a 2.56 by 2.2 inch footprint, with a maximum height of 0.33 inches; most of the board is less than a quarter-inch tall. It has the same footprint as the comparatively underpowered Raspberry Pi Model A, which debuted in 2012.

That’s a huge improvement for creators of handheld devices, which can now be considerably thinner and smaller than prior models based on the Raspberry Pi 3 Model B and B+ boards. Previously, Pi 3 enclosures had to be around twice as thick and nearly an inch wider, so the change will enable new handhelds to be closer to a classic Apple iPhone than the original Nintendo Game Boy in size.

The Raspberry Pi 3 Model A+ is available now from the Foundation and authorized retailers for $25 — $10 less than the Model B+. Software developed for the B+ should work on the A+ with minimal adjustments, but users may want to wait a couple of weeks for the dust to settle with Linux OS packages.