The game will debut on iOS and Android just ahead of the February 22 release of the next DreamWorks Animation film, How to Train Your Dragon: The Hidden World, which arrives in theaters February 22, 2019.

In DreamWorks Dragons: Titan Uprising, players can become the puzzle champion as they reunite with Toothless and Hiccup in their fight to save Berk from the nefarious Dragonroot Company. Alongside other trainers, fans can make their way through a variety of regions beyond the island of Berk, swiping and matching their way to victory.

“With DreamWorks Dragons: Titan Uprising, we wanted to bring the classic How to Train Your Dragon characters to life in a mobile game that provides players with challenging puzzle-based gameplay that is also filled with fantasy quests and epic combat battles,” said Alex Thabet, CEO of Montreal-based Ludia, in a statement. “We can’t wait to see how fans react as they escape to a dragon-filled world with puzzle adventures.”

Players will need to hatch and nurture their own roster of dragons, from small-scaled babies to towering Titan Wings, and they can also cross-breed their dragons to create all-new hybrids. With battle teams created from a collection of nearly 100 dragons, players are able to combat their foes by matching three or more rune stones. The game also allows the fearless fighters to unleash their dragon’s Spirit Abilities in more than 750 unique battles. 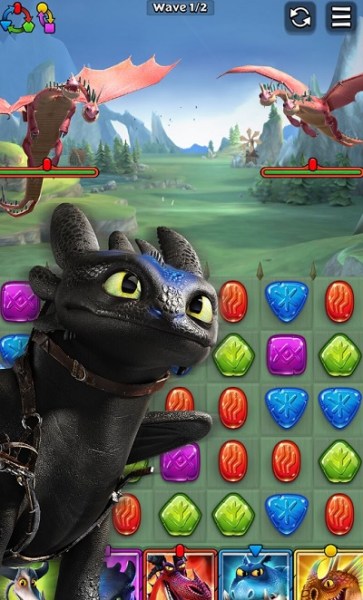 “In celebration of the highly anticipated film debut of [the upcoming film], DreamWorks Dragons: Titan Uprising will give players the opportunity to breed their own dragons and bring them on soaring new adventures as they transform into powerful Titan Wings,” said Chris Heatherly, executive vice president of Games and Digital Platforms, Universal Brand Development, in a statement. “Ludia has done an amazing job of creating a compelling match-3 puzzle experience that is inspired by the thrilling third instalment of this beloved franchise.”

Starting today, fans can visit the site and pre-register to receive a Premium Draft Token at launch. This in-game token gives players a guaranteed Dragon, and a higher chance of summoning an Epic Dragon. The token also allows players to craft strong teams to take into battle right at the game’s launch.

Previous games based on How to Train Your Dragon were Rise of Berk, published by Ludia in 2016, and School of Dragons, published by JumpStart Games in 2013.