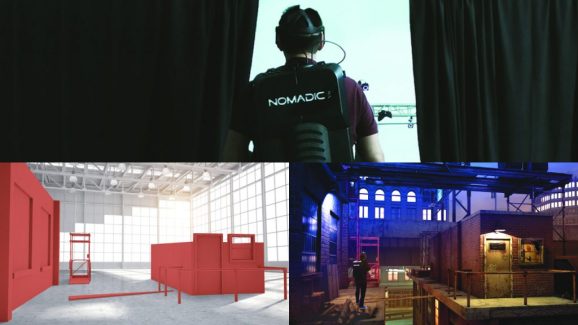 We’re at the point now where it typically takes a lot to really ‘Wow!’ me with VR. After covering the industry heavily for almost three years, I’ve seen and played a lot. But after I took off the headset and became reacquainted with the real world around me, one thing was clear: Nomadic made me literally say “Wow!” after it was over. I haven’t been this impressed with anything in VR since the first time I tried the technology via room-scale experiences years ago.

What makes Nomadic so special is how interactive everything is. The experience I played was based on Arizona Sunshine, one of the most popular VR games to date that pits you against hordes of zombies. It took place inside a series of small rooms that were arranged like a maze in the real world, but skinned to resemble things like trains, helicopters, elevators, and more inside VR. It’s the closest I’ve come yet to truly tricking my brain.

Nomadic is a VR experiences company founded by people that have a history of work in Hollywood at companies like Industrial Light and Magic on Star Wars films, as well as ImageMoversDigital as part of Disney. What sets Nomadic apart from its competitors, such as The Void, is that it’s designed to be much more modular and adaptable. While the bulk of what makes Nomadic so special resides in its interactivity and physicality, the real brains of it all is on the software side.

Nomadic locations are setup so that dozens of people can move through experiences simultaneously without ever interfering with one another. If you try an experience with The Void, you might have to queue up and wait for the next group to finish, but with Nomadic it’s all seamless. While you’re inside the experience a group can be ahead of and behind you and the game will adapt to the pacing in real-time to make sure you don’t run into each other.

What’s more is that it’s not only a multiplayer experience, but the setups are adaptable as well. Environments can be re-skinned and used in novel, new ways without rearranging the props at all. And if they want to do a total overhaul, in a matter of hours they can remap the room using the modular wall system that functions a lot like cubicles.

Above: Stepping into a larger world.

From a tech perspective Nomadic uses Oculus Rifts with backpack PCs all tracked via OptiTrack’s robust camera system. The actual pieces of the set itself were installed with gyros to track movement and some surfaces could even vibrate and move in sync with their VR counterparts. For example, there was one section where I walked across a plank that actually existed in real life and moved around inside the game when I touched it, or the filing cabinet drawer I opened up with an actual yellow ducky inside.

In my demo I was tasked with seeking out a doctor in a refinery that was holed up in his office theoretically with the cure to the zombie plague. I had to fight my way across the refinery to him and hopefully get there in time to save him and the cure. The game started in a train car.

The back door of the train was open and we were speeding along the tracks at a high-speed. When I poked my head out of the door I could feel the rush of wind on my hands and face. Hanging next to the door was a rifle peripheral that was mapped to match the in-game gun I was carrying perfectly.

Moment-to-moment gameplay was pretty simple: I just shot a bunch of zombies. To make things more intense I ran through the whole experience solo, but it’s designed to be enjoyed by a group as well.

I’ve done The Void’s Star  Wars experience, I’ve tried Sandbox VR, and I did the Dead and Buried Arena on Oculus Quest at OC5, among other location-based experiences, but none of those are as interactive as what Nomadic is doing. The way that they’re technology works it really opens up doors to do some incredibly unique and groundbreaking stuff.

It’s difficult to overstate just how powerful it is to see something in VR, reach out with your real hand, see your hand tracked inside the digital world, touch the object, and then have it feel like you’d expect it to in real life. It’s mind-blowing.

And I know, once again, that The Void has done some of this already, but their sets are nowhere near this elaborate. Every small detail from the metal chain links on the fence texture to the moving plank or the platform I sat on at the end, riding a helicopter, with wind in my face, and vibrating movements to simulate flying, really and truly sold me on the illusion.

Nomadic just recently opened their flagship location in Orlando, Florida. Reportedly tickets cost $30 per person and there are two versions of the experience — one with lots of gore (age 17-plus) and one that’s a bit more tame (age 13-plus). You can check out the official website for more details.