Not many people have tried out the Magic Leap One Creator Edition. After all, the augmented reality glasses cost nearly $2,300. I’ve tried it out, and so the first thing I headed for was the games. I showed my kids Angry Birds FPS: First Person Slingshot, which was a cute but short experience.

But Dr. Grordbort’s Invaders, the 360-degree shooting game from Weta Workshop, is the real deal. It’s a taste of what the next generation of AR gaming is all about. But like any pioneering work of entertainment, it’s also got some warts. I figure everyone wants to know what it’s like to play a game in AR, considering Magic Leap has raised more than $2.3 billion and Magic Leap CEO Rony Abovitz has hyped it as enabling users to live “10 years in the future.”

I’ve been playing with it during my vacation break and showing it to the family as well. What better way to spend Thanksgiving, right? I found it to be quite joyful and fun to show off to the relatives, who also marveled at VR experiences when I showed VR headsets to them. 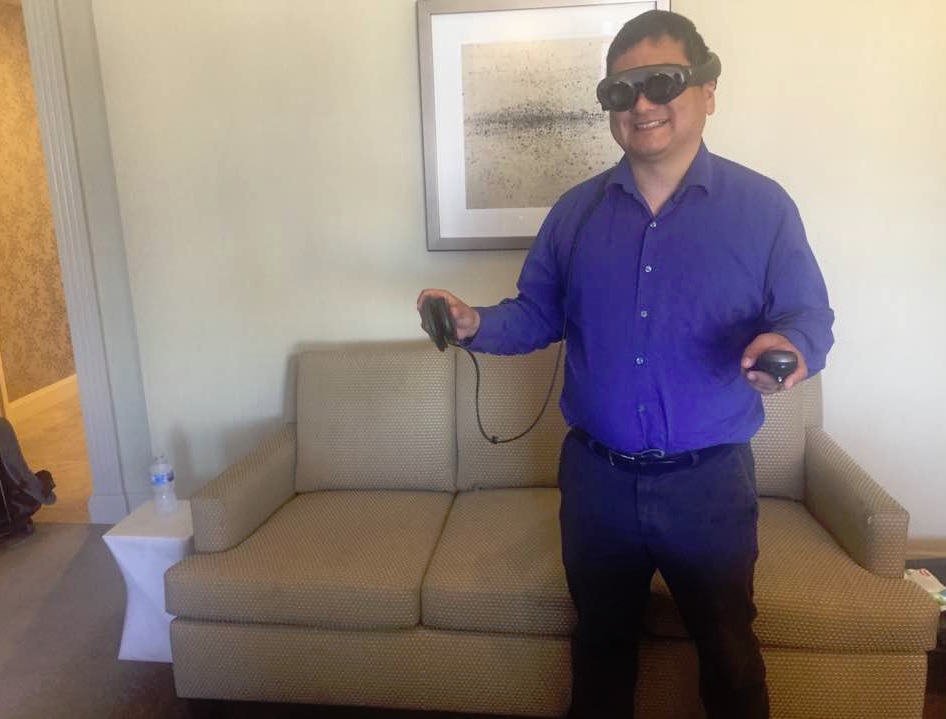 It’s a bit of a production to get to the starting line. A human installer came over my house and helped me get started with the Magic Leap One Creator Edition, which I used at the company’s coming out event in October. I don’t have the prescription lens that will eventually be available for it, but I can see the images on the glasses pretty well without my prescription lenses.

It takes a while to boot up the glasses from a cold start, but it’s simple enough. You press the button on the computing puck, which is attached via wire to the glasses. The puck clips to the side of your pocket, and you slide the glasses over your eyes and around your head. You navigate by using a one-hand remote that has six degrees of freedom and fairly decent tracking.

After downloading the sci-fi game, I used the touchpad on the remote to navigate to the icon for Dr. Grordbort’s Invaders. It took some time to load, and once it did, it asked me to scan the room. I did so by looking all over the place and moving around, so that the sensors on the headset could figure out where the surfaces of the walls, furniture, floors, and other objects were. It built a map of the room, so that it could figure out where to overlay animations on top of the real world. 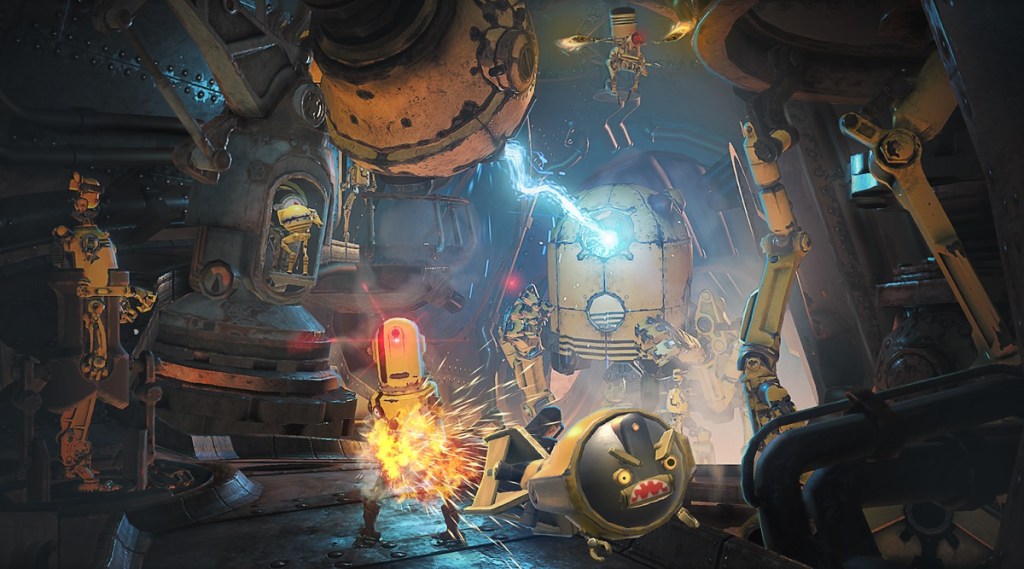 And then this cute flying robot named Gimbel came out and started briefing me in his thick New Zealander’s accent. He was floating in the air and chattering, and then he showed a projection of Dr. Grordbort, who reminded me of Doc in the Back to the Future films. The doctor warned of impending peril for Earth from an invading army of robots who figured out how to open portals from their world to ours.

Gimbel showed me a ray gun and I picked it up. Then I fired it at the animated walls, which were done in a retro, Steampunk style. It melted some of the metal off the walls, and it felt nice in my hands. Then I got ready for round one. Like with virtual reality games, most of the interaction wasn’t based on simply pressing a button. I had to move my feet and my arms to press buttons and get things to happen.

It was a much more physical experience. After playing the game for a while, I was getting sweaty. Giving me some exercise is one of the positive impacts that AR shares with VR.

Once Gimbel showed me what to do, and I figured out how to load a mission and select my weapon, the attack came. The robots opened a portal and sent an invading force in. I fired at the robots wherever they emerged from the portals in the walls, on the floor, and on tables. In contrast to VR, I could see all of the furniture in my living room — and later in my garage — as I fired at the clanky mechanical robots.

Big yellow robots walked out of the portals, and I had to shoot them in the head or in their legs to take them down. Bee-like robots also flew in and hit me from all directions. I had to move around and keep looking behind me to keep from getting hit. I had full, 360-degree freedom to move around and evade the projectiles coming in from the robots. Once I beat the robots, I had to fire into the portal and mess up the reactor core on the robot’s homeworld, causing them to retreat.

The first rounds were pretty easy, and then I got a new gun. Over time, the levels got progressively harder to clear. It’s pretty hard to play it all in one sitting, since you get so much exercise moving around. But I’ve enjoyed my time with it so far. 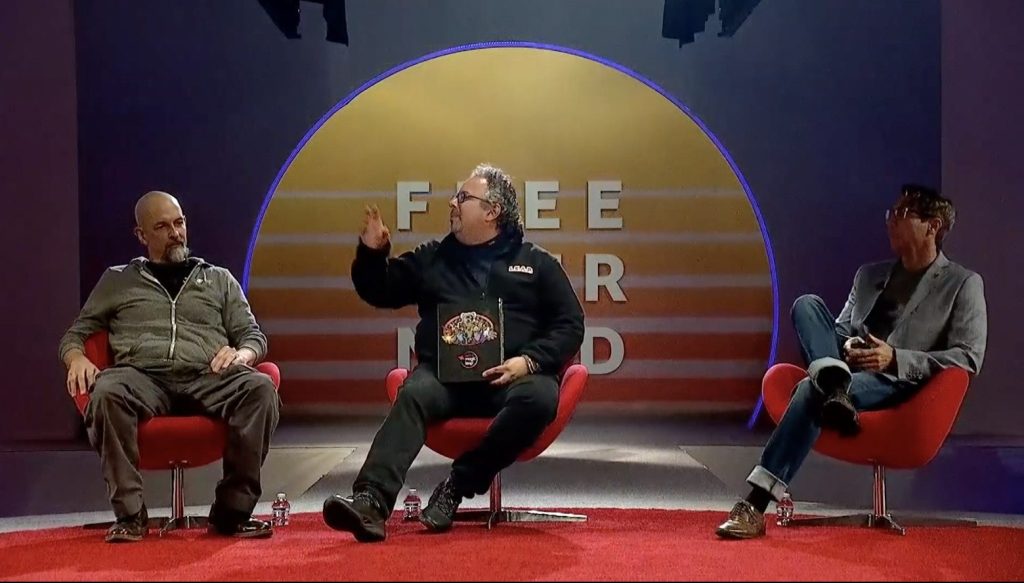 One of the things that ruins the whole illusion is the small field of view. It’s as if you had blinders on, like a horse, and you can only see a certain part of the animated world at once. To see all of Dr. Grordbort, for instance, you have to look up at him and then scan your eyes downward. It kind of kills the fantasy.

The tech is fairly good, but it’s not absolutely amazing when it comes to being able to distinguish the animations from the real world. It’s pretty easy to tell what’s part of the cartoon, and what’s part of my living room. [Updated: Corrected this part. So much for going from memory]. The game has some limited occlusion, where enemies can hide behind furniture, but it doesn’t do it all that much. And once in a while, the game crashes and you have to play a mission over again.

The game was in the works for nearly five years at Weta Workshop, and it’s available for free on the Magic Leap World store. Much of that time was spent waiting for Magic Leap to finish its prototype.

Free is a good price for this experience, and that could get a lot of Magic Leap users to give it a try. But, of course, you have to buy the headset to be able to play it. I think it was a wonderful first experience, warts and all, and something that really shows off the power and potential of the Magic Leap device.

It’s almost a magical experience, except for the small flaws I pointed out. I’m looking forward to seeing more groundbreaking entertainment that really marries our world and the fantasy world.

Disclosure: Magic Leap provided me with a Magic Leap One Creator Edition for the purposes of this review.