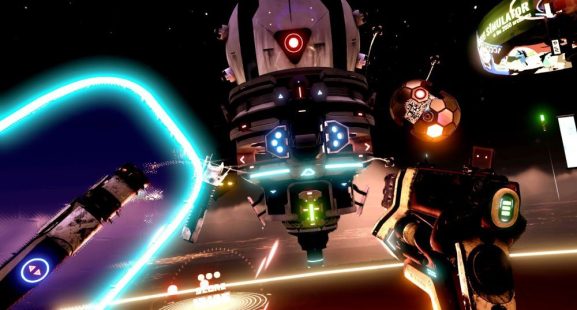 Space Pirate Trainer -- learn to plunder between the stars in VR.

Space Pirate Trainer was, for many VR early adopters, one of the very first games to ever grace the lenses of their HTC Vive headsets. The game debuted on Steam in Early Access right alongside the Vive itself and was a picture-perfect example of how to do a wave shooter in VR that was both fun and challenging.

Last year it finally released out of Early Access and now, on November 27th (next week!) PSVR users will get their chance to take a shot at the swarming hordes of robot enemies. That’s the same date that bow and arrow roguelike shooter, In Death, also releases on PSVR.

We've been working super hard on delivering a kick-ass #PSVR version of SPACE PIRATE TRAINER and guess what… It's coming next week! Get off your sofa on November 27th 2018 to dance yourself into the SPT hall of fame. pic.twitter.com/ppWWGt5T3e

We found out about the news by way of a tweet from Project Lead at developer I-Illusions, Dirk Van Welden. According to Van Welden in follow-up tweets, the only differences between the existing PC VR version and the upcoming PSVR version is a “a custom chaperone system which keeps you in the tracking area in a stylized and natural way” due to Sony’s 180-degree front-facing tracking limitations. Anyone that’s played Space Pirate Trainer will tell you though that the majority of the game plays like that naturally anyway.

This is good news for PSVR owners as more and more of the best PC VR titles continue to make their way to the flagship console gaming VR device.