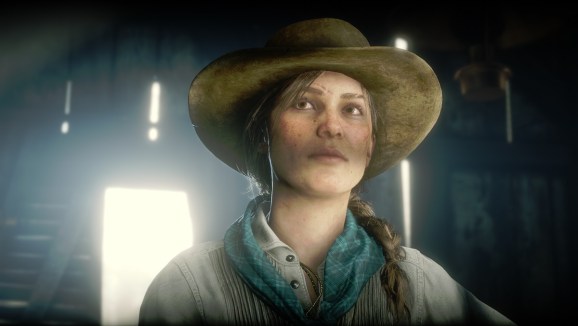 Sadie Adler is ready to ruin some cowboys in Red Dead Online.

Red Dead Redemption 2 is a disappointment. After a few dozen hours with the cowboy simulator, I think it is an admirable creation, but I don’t enjoy playing it. Now, developer Rockstar Games is preparing to launch its Red Dead Online mode into a beta test tomorrow, November 27, and I’m hopeful all over again.

Rockstar still hasn’t showed many details about Red Dead Online. So I think most people are operating under the assumption that it is GTA Online with horses. That has some appeal, but it’s not enough to bring me back. I also want Rockstar to make some substantial improvements to the underlying fundamentals of both Red Dead Redemption 2 and the infrastructure of GTA Online.

Red Dead Redemption 2 has an archaic and convoluted control scheme. I also have zero expectations that Rockstar is going to do anything to fix that. If it has done very little to modernize the controls since Grand Theft Auto IV. My assumption is that the developer thinks its scheme is fine the way it is.

But I do expect Rockstar to improve the input lag.

The delay between moving the analog stick and when Arthur Morgan begins to move in Red Dead is very noticeable. EA Motive animator Dan Lowe posted a video on Twitter examining that lag, and he found that it is significantly higher than comparable games. This makes everything in Red Dead Redemption 2 feel sluggish or “deliberate” if you are generous.

But if sluggish movement is annoying in a single-player game, it is poison for an online experience. If you end up dying because you couldn’t move your character out of the way of another player’s horse fast enough, you’re going to end up frustrated.

I haven’t played a lot of GTA Online, and that’s for a handful of reasons. Most notably, the load times kill the pacing. I also think it’s hard to find reliably fun content outside of the heists. And even the heists often feel broken because if you don’t have a full crew of four players, you have to rely on the notoriously toxic and fickle Rockstar community.

For Red Dead Online, I’d like to see a lot fewer loading times. When I do see them, I hope they are shorter than what you get in GTA Online. And most importantly, a lengthy loading screen shouldn’t put me back into the single-player game if Red Dead Online can’t find opponents to match me with, which is something that GTA Online actually does.

Rockstar also needs to do something about how it surfaces its various game types. In GTA Online, you could search through lists of different modes, but these lists have almost no data to help you understand what exactly you’re about to get into. Red Dead Online could use something like a more detailed community tagging system to address that.

And then I hope Rockstar rethinks the experience of doing multiplayer heists or whatever the Red Dead equivalent is. In GTA Online, you can’t start certain Heist missions unless you have four players. And then if one of your four players quits, you’ll automatically fail the quest. The developer has done some work to lower those requirements. You can perform some of the most recent Heist missions as a two-player squad, for example. Hopefully, Rockstar keeps moving in that direction.

Better systems for interacting with the world and other players

One of my biggest issues with the single-player experience is that every moment feels scripted. I never got the sense that Rockstar was turning over control of its systems to me so that I could go out and create my own fun. So that’s what I want from Red Dead Online.

If this multiplayer mode is just a way to go out an do scripted missions with friends, you can count me out. But if Rockstar gives me ways to get creative, I’m very interested.

For example, can I do something like run a protection racket in a town with my gang? And then would I have to just go out and shoot a rival crew trying to mess with my shops under my care, or could I easily set up an ambush against them by placing a juicy, broken down carriage outside of their camp?

It doesn’t have to work exactly like that, but I want some freedom to get creative. And this is Rockstar’s opportunity to hand that over to us.