Novaquark is launching the first playable alpha version of Dual Universe, a Civilization-like sci-fi game that will bring together a community of online gamers who can help edit and add to the creation.

The alpha version on the PC is the first big milestone announcement since the Paris based Novaquark raised money from Kickstarter and its own web site backers in 2016. It’s a world that could rival games like Sid Meier’s Civilization: Beyond Earth or Second Life or the much better-funded Star Citizen.

Novaquark said it has already put the game through months of testing with a dedicated community, which is tasked with going to the stars and shaping planets for the sake of exploration, building, trade, or conquest.

Dual Universe’s Alpha 1 brings the first three facets (explore, build, trade) of the sandbox universe to life. It allows players to explore and build almost anything, and then trade on the in-game player driven markets.

They can build or explore subterranean bases and futuristic cityscapes, and ride spaceships capable of interstellar travel or planet-bound hovercrafts. The dev team has created Alioth, a starting planet, with an area close to the size of Great Britain. And that’s only the first planet.

In addition to these planet terraforming and construct building possibilities, Dual Universe offers tools to help players mine, harvest, transport, store, and sell building resources. Leveraging the first iteration of Dual Universe’s crafting system, players will need all the resources they can get their hands on. 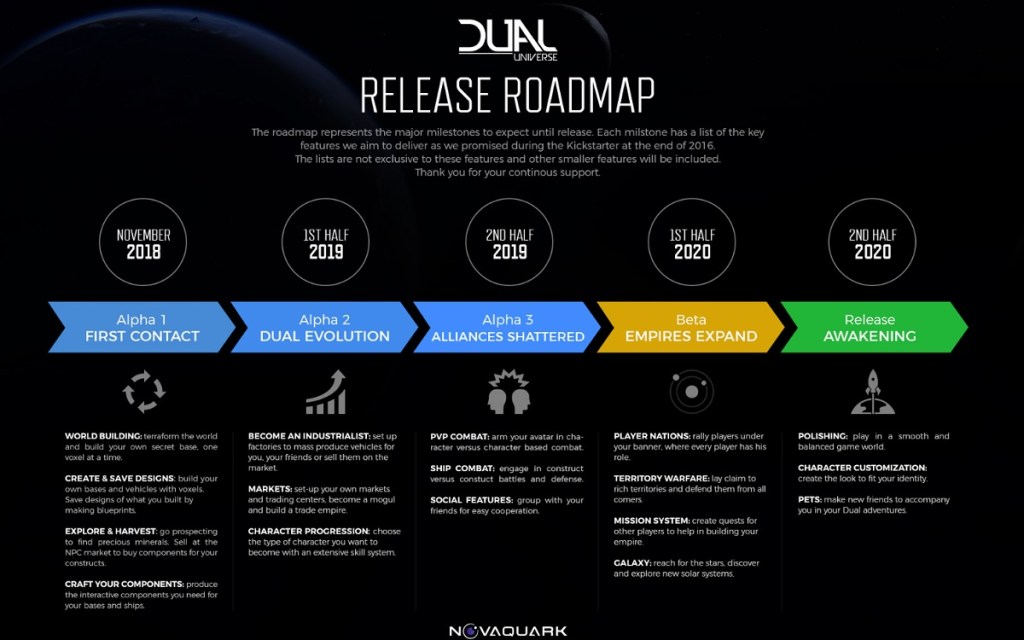 Above: Dual Universe has a big roadmap.

The roadmap is quite ambitious. Novaquark intends to continue building upon the feedback of players — both veterans and newcomers — as they work toward creating a gaming Metaverse.

Dual Universe will welcome all Kickstarter backers, no matter the amount of their pledge into the alpha before the end of the year. That will bring the game population over 11,000 players in the same entirely editable single shard server.

The Alpha 2 is slated to arrive in the first half of 2019. The company raised $1.4 million dollars in funding on both Kickstarter and its official website, and boasts a community of over 11,000 backers and more than 2,100 in-game organization communities. The full game is slated to open in 2020.

Dual Universe is an “editable universe,” meaning players can shape everything via Lua scripts. The company is seeking to put millions of players into a single, continuous shard cluster, which means players won’t be separated in different versions of the same world. The company promises no instances or load screens.

Novaquark, composed of veterans from Sony, Apple, CCP Games, Epic Games and Bioware, is on a mission to bring a new generation of MMO through science, expertise and technological innovation.