Deathtrap Dungeon is an evocative name. It conjures mental images of crumbling halls deep under the earth, monsters with blood on their claws and saliva dripping from their fangs, and traps with sharp points covered in gore.

And decades after intrepid adventurers first ventured into these terrible tunnels in the 1980s, it’s time to dive back in. Except this time, you won’t be opening your Fighting Fantasy gamebook from Ian Livingstone and Iain McCaig — you’re going back as the Hero of Deathtrap Dungeon, a computer role-playing game that’s a sequel to the iconic Fighting Fantasy gamebook. It’s coming out next year. The studio on the project is Sentient Play and includes veterans who helped launch Dungeons & Dragons in Europe, the original Tomb Raider and Hitman games, and … IBM Watson (first time I’ve ever read that in a story about video games!).

Hero of Deathtrap Dungeon is running a campaign on crowdfunding site Fig for $200,000.

I did a short email interview with Brad Becker, founder of Sentient Play (and the former chief design officer for IBM Watson) about the project and stepping into the harrowing halls of Deathtrap Dungeon. This is an edited transcript of our interview.

Brad Becker: Whole new generations of players are discovering Fighting Fantasy books right now and Scholastic has recently started printing a new edition in the UK. There have also been successful digital versions with the Sorcery! games from Inkle and even Deathtrap Dungeon games from Asmodee and Tin Man Games. What there hasn’t been—up until now—is a true sequel extending the story and expanding the location of Deathtrap Dungeon, possibly the most loved setting in Fighting Fantasy’s world.

GamesBeat: What sort of RPG will it be? Is it going to be a first-person game? An isometric game? Action-RPG?

Becker: This is essentially a turn-based solo dungeon crawl but the presentation is “novel”—pun intended—since the action takes place within the literal 2D pages of a 3d book. It harkens back to old-school pen and paper games like Dungeons and Dragons or the original Fighting Fantasy gamebooks—if those physical books could come to life and write themselves as you played. 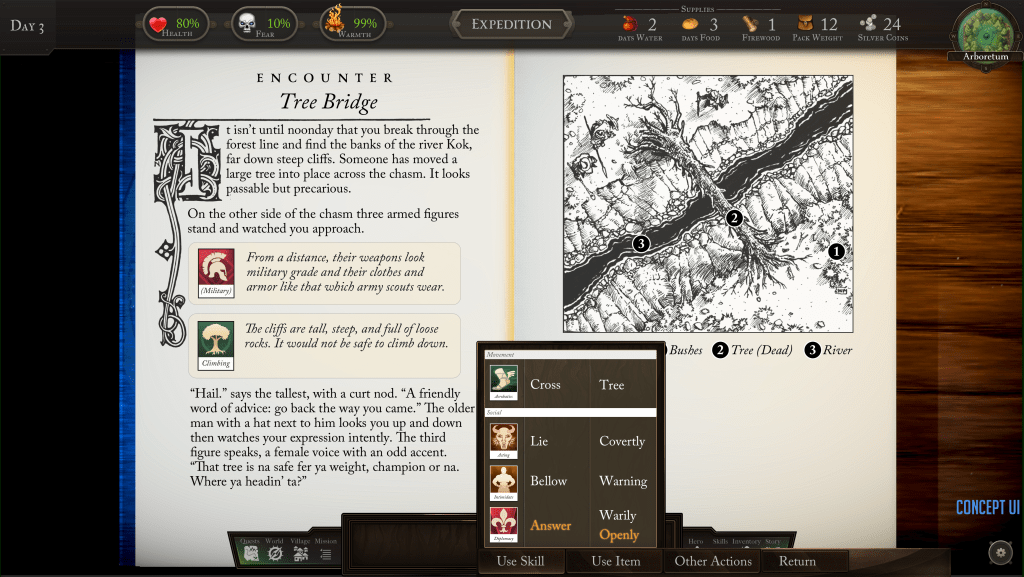 Above: An encounter in Hero of Deathtrap Dungeon

GamesBeat: Will it be at all connected to the 1998 Deathtrap Dungeon video game?

Becker: Although it’s the same setting, The Hero of Deathtrap Dungeon focuses a lot more on storytelling, character progression, descriptive situations, and using your skills, equipment, and wits to find creative solutions to challenges.

GamesBeat: Who is this Hero, and why are they important?

Becker: Fighting Fantasy books are known for the tagline “YOU are the hero!” and we’re letting players decide what skills they want to learn and how they want to develop their hero over the course of each playthrough. In the current pre-alpha, the only things set about the hero are that they are level 0 and the child of one of the city’s best craftsmen. There may be multiple backstories depending on how the campaign does and what playtesting reveals.

GamesBeat: How does the story build on the original Deathtrap Dungeon pen-and-paper game?

Becker: The story of the sequel is that the creator of the dungeon has profited greatly from the tournament and has reinvested much of the profits to enlarge the labyrinth to truly be the greatest challenge in the world.

GamesBeat: Will this be an infinite dungeon? The release mentions replayability.

Becker: The game is designed to be replayable with more encounters, player skills, equipment, and choices than you can see on any given playthrough. That said, your objective is to actually beat the dungeon and win. For any playthrough you might die, you might survive but run out of time, or you just might actually make it all the way through in time and win.

GamesBeat: Why tap Sentient Play for this?

Becker: If you look at the studio’s previous game, it was an ambitious title with high production values. We evaluated the prototype for this game, and came away with confidence they could do the same here, and only needed the right IP holder to be partnered with to help position them for success.