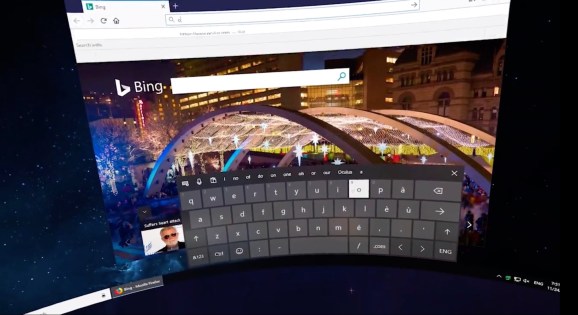 Two and a half years ago, the Oculus Rift version of Virtual Desktop enabled users of Facebook’s $400 headset to view their Windows PC desktops within a VR space — including multi-monitor support and theater modes for videos and games. Today, Virtual Desktop became available for less expensive Oculus Go and Samsung Gear VR headsets, bringing Windows mirroring to the untethered masses.

The Go and Gear version of Virtual Desktop arrives with a collection of nice features, including support for any PC running Windows 8.1 or later, quick switching between up to four different PCs,  and multiple controller options ranging from the Go controller to Bluetooth mice, keyboards, and gamepads. Developer Guy Godin is promising to add multi-monitor support, 180/360-degree video support, and 3D content in the future.

Instead of piping mirrored video through a tethering cable, the Oculus Go and Gear VR stream PC content over Wi-Fi and/or the Internet. Godin recommends a 5GHz Wi-Fi connection for optimum quality, and says the app has been specifically optimized to provide a balance of high quality video with low latency despite its fully wireless functionality.

VentureBeat’s own Jeff Grubb found the Rift version of Virtual Desktop to be usable for extended periods of video viewing, gaming, and even working on a PC. Reviews of the new Go app have been similarly positive, suggesting that the streaming video quality is better than expected.

Virtual Desktop is $10 from the Oculus Store, and requires 753MB of storage on the Go or Gear VR. In addition to the Go and Rift versions, there’s also a Steam option for HTC Vive and Windows Mixed Reality users, plus an Oculus Quest version in the works for release next year.