When you go eight years between release dates, it’s bound to cause some excitement. Coinciding with the long-awaited Red Dead Redemption 2, Rockstar Games churned out plenty of supporting material to hype the release in October. 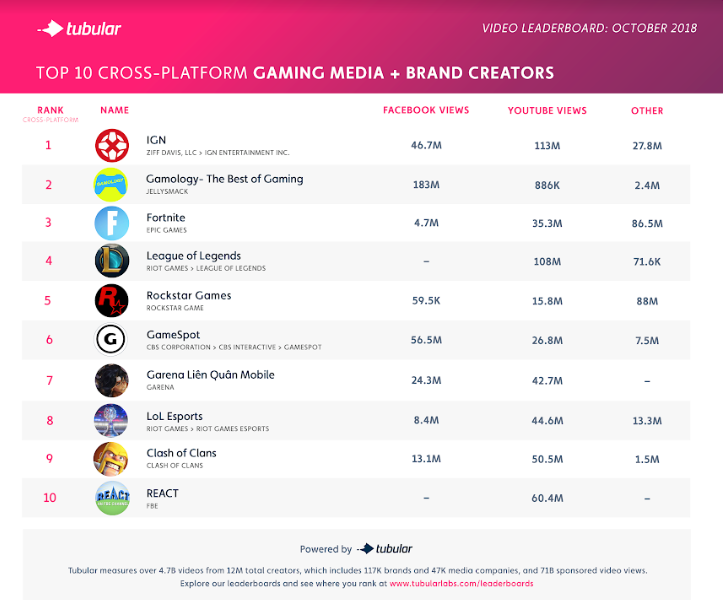 Red Dead Redemption 2 paced Rockstar’s creation schedule, but it drove content for other gaming entities as well. IGN, at the top of the charts again this month, had four different videos about the game that all hit at least 1 million views. Its official review of Red Dead Redemption 2 led the way with 3.7 million in October alone, and a rundown of what to do first in the game wound up with 2.4 million.

Rockstar itself hadn’t done much with social video in the three months leading up to this (YouTube and Facebook views declined to 4 million by September), but the brand posted 60 videos across multiple platforms in October — almost entirely about Red Dead Redemption, and to the tune of over 100 million views. It didn’t matter what language the videos were in, either. The most-viewed Rockstar video was a Japanese trailer for the game with 12.9 million. In total, 16 different Red Dead Redemption trailers or preorder promos received at least 2 million views apiece.

Fortnite maintained its hold on the No. 3 spot, with Halloween-focused content and a surplus of Instagram videos. The “Fornitemares 2018” short video on YouTube generated 18.3 million views on its own. But beyond that, its Instagram page collected millions of views per video — adding 14 million views on that platform alone from one month to the next. Instagram subscriber numbers also climbed by 1.1 million in that stretch.

League of Legends continued its emphasis on entertainment-focused videos, with the “RISE” remix featuring Bobby of iKon earning 10.8 million views on YouTube. Its partnership with the Boston Celtics’ Gordon Hayward also generated another 6.6 million as League of Legends continued to push its ties to the NBA (they’ve been advertising during games and on NBA TV all season so far). The LoL Esports channel, focusing on professional competitions, found itself in this month’s top 10 as well, up at No. 8. LoL Esports more than doubled YouTube views in October on the strength of World Championship footage.

Gamespot found success with Red Dead Redemption 2 content (three different videos topped 1.1 million), though that was far from the channel’s only driver. A trailer for 2019 film “The Queen’s Corgi” found exactly the sort of audience you’d think for (arguably) the internet’s favorite dog breed, collecting 3.2 million views. Gamespot’s top video, though, was a clip from a different kind of Queen — the rock band biopic “We Will Rock You” — which had 10.9 million views on the month.

The Vietnamese page for Garena Liên Quân (Arena of Valor) was a surprise addition to the leaderboard in October, adding over six million YouTube views and continuing a steady three-month climb on that platform from 26.9 million up to 42.7 million.