Techno thriller Searching is a video game movie — but you won’t find Dwayne Johnson battling demons on Mars (or critics on Twitter) or Michael Fassbender swan-diving into a bale of hay. Instead, writer and producer Sev Ohanian, along with writer and director Aneesh Chaganty have cleverly incorporated game mechanics into their film. For inspiration, they’ve looked to a wide variety of titles like Fulbright’s Gone Home, Quantic Dream’s Heavy Rain, and Valve’s classic puzzler Portal. In the process, they’ve learned how to do the thing that games do best: interactivity.

At its heart, Searching is a mystery film. Widower David Kim (John Cho) must find his missing daughter, Margot Kim (Michelle La). But in this scenario, he isn’t an action hero. He’s a concerned dad who can’t do anything besides scour the Internet for traces of his daughter’s existence. The entire movie takes place on screens, inhabiting digital spaces like Facebook and Twitter and relying on FaceTime and faux YouTube videos to give its stars a chance to shine. David never meets Detective Rosemary Vick (Debra Messing) in person, even though she’s helping him track down Margot. Instead, they call each other and swap emails and Google Sheets filled with bewildering reams of information.

“I find that storytelling in gaming is so fascinating because they are not limited by the same constraints that we are in filmmaking,” said Ohanian in a phone call with GamesBeat. “And I think there’s a beautiful synergy that can happen if we can pull from them because they have been pulling from films. Obviously, in the last couple of years, games have become even more and more cinematic, and I believe that should be a two-way street because we have a lot we can learn from our brothers and sisters who are making these masterpieces that just happen to be played at home with controllers — not seen on big screens.”

Producer Natalie Qasabian as well as editors Will Merrick and Rick Dobson round out Chaganty and Ohanian’s team of five. They shot the film in 13 days, and they spent a year and a half in post-production, where Merrick and Dobson painstakingly created and animated the pixel-perfect cyber landscape. Searching debuted at the Sundance Film Festival in January, where it snagged a $5 million distribution deal from Sony Pictures Worldwide Acquisitions. It started with a successful run in a limited number of theaters before a wider release on August 31, generating around $46 million at the box office worldwide. 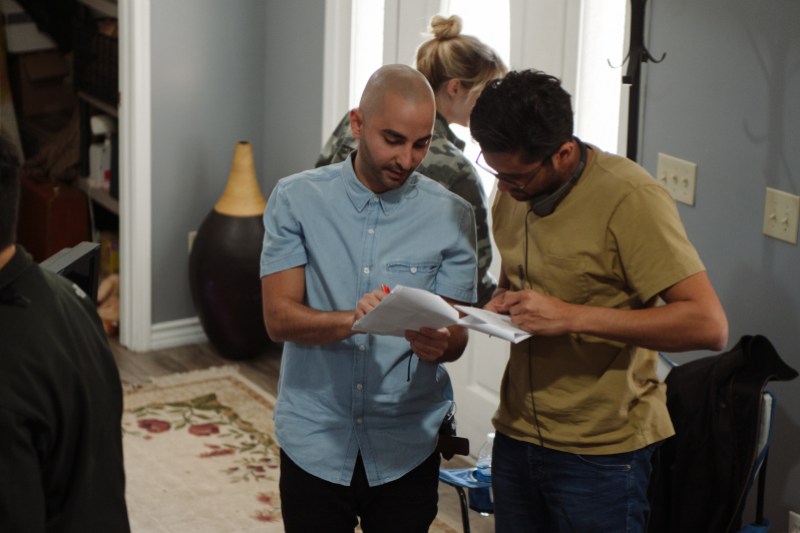 Above: Sev Ohanian and Aneesh Chaganty on the set of cyber thriller Searching.

Searching isn’t the first movie to take place entirely on computer screens. The 2014 Unfriended and its recent sequel Unfriended: Dark Web have similar conceits. But while those other films only used a single camera angle, keeping a static shot of the protagonist’s computer screen, Ohanian and Chaganty took more of a dynamic approach, sometimes jumping forward through time or shifting to different perspectives. And to keep the viewers focused on the main storyline, Ohanian cites learnings from games like Portal.

Ohanian recounts how he found Portal’s developer commentary mode “fascinating and educational.” After the player has finished the game, they can explore the Aperture Science Enrichment Center and click on bubbles to learn more about what the Valve team was thinking when they designed certain aspects of the game.

“Oftentimes, they were talking about how they were trying to guide the viewer of their own accord to see things that were in the environment,” said Ohanian. “They could have always easily plopped it in front of their faces, but they spent so much time and care to use like lighting or shadows or sound or whatever it may be, even the shape of the wall, because they would see most viewers would tend to then move their mouse and look at what they were trying to show them.”

This was a crucial lesson for a film like Searching, where viewers could easily become lost among the digital detritus. Ohanian said that they had to develop a lot of techniques to guide viewers’ eyes to points of interest.

“Because Searching is set on devices and screens, we don’t have the luxury of being able to just literally move the camera more often than not, and we found ways to really use the mouse to guide viewers’ eyes, and we found ways to kind of mimic real cinematography, handheld shakes, camera zooms and pans,” said Ohanian.

A new way of environmental storytelling 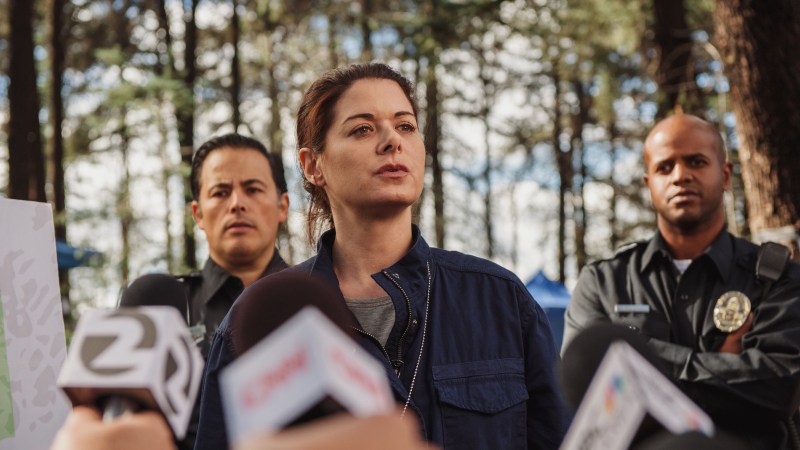 Above: Actress Debra Messing stars as a tech-savvy detective.

Though films have a long history of subtly cueing viewers through objects in the environment — think the carefully curated baubles in a Wes Anderson film or the rich fantasy world of Guillermo del Toro’s Pan’s Labyrinth — Ohanian says that games like Gone Home showed him how environmental storytelling could be used in a whole different way.

Like Gone Home, Searching gradually peels back the layers to Margot’s character as David draws closer to the truth. And he can only do this by studying the artifacts of her secret digital life.

“I thought [Gone Home] was such an incredible experience learning about your loved ones by what they left behind, and in a lot of ways, that’s what Searching is,” said Ohanian. “The truth is, David realizes he didn’t lose his daughter just days ago, he learns he lost her years ago. And only in the process of trying to figure out who she was is how he can find out where she is.”

But that isn’t the only inspiration he drew from the game world. Ohanian’s a big fan of games like Rocksteady Studios’ Batman Arkham series, where items strewn throughout the map are ready for fans to dissect and investigate. He’s excited by Easter eggs like LucasArts’ Star Wars: Rogue Squadron’s famously hidden Naboo Starfighter.

So when he and Chaganty crafted Searching, they made sure to do plenty of world-building of their own, adding in secrets and allusions to future projects for viewers to find.

“Every frame of this movie, if you ever hit pause, every text, every word, every photo, every emoji, everything is handmade by us to enrich the world of David Kim,” said Ohanian. “So, all the text conversations on the side, they represent multiple subplots that are happening all throughout the film. There’s all sorts of Easter eggs that we’ve hidden in every corner. There’s a lot of foreshadowing that we planted and a lot of other fun little secrets. And that entirely comes from video games.”

He refers to this as making the movie “pause-proof” — the audience won’t find any placeholders anywhere. Very quickly after the film’s release, Reddit took him up on the challenge, uncovering a continuous alien invasion subplot unfolding on news sites and picking up hints of David’s love life in his inbox. 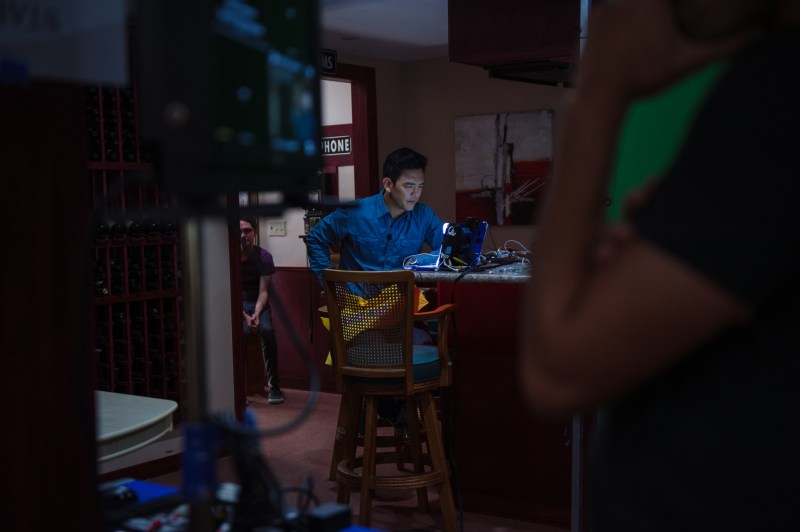 Above: Actor John Cho scours the Internet for traces of his character’s missing daughter.

“Before we even started writing a single word, what Aneesh and I did was we pulled out our laptops, and we started exploring our computers. And we looked at all of the things everyone does on their computers every day,” said Ohanian. “We tried to challenge ourselves — like if we’re going to tell this story, if we’re going to make this film happen, we’d be doing ourselves a disservice if we didn’t try to elevate as much as possible this crime-thriller mystery along with the story of a family in a world with so many connections, yet they’re so disconnected.”

Searching’s great success is its ability to imbue innocuous everyday actions with sinister undertones. A swirling screensaver isn’t just a sleeping Mac; it’s a father missing calls from a daughter moments before she disappears. In the opening montage of the film, we watch as David’s wife and Margot’s mother gradually succumbs to cancer through a series of gut-wrenching home videos before a dejected mouse cursor drags the calendar event “Mom comes home!” to a trash can. As in text-based games like Bury Me, My Love or the AOL messenger game Emily Is Away, its chat messages make good use of pauses and backspacing, revealing characters’ hesitancy.

Even though it’s a film and not a game, the audience is invited to join David on his investigation. Like any proper mystery, it’s murky with red herrings, plot twists, and suspicious figures. Thrillers like these are as interactive as a traditional flat-screen movie can get, and Searching’s mimetic interfaces make it even more game-like. Most people are familiar with smartphones and computers and to varying degrees sites like Facebook. Watching the movie, you almost want to try your own hand at hunting down Margot’s whereabouts.

Though video games and movies have had a somewhat sordid history, Ohanian says he’s excited to see more cross-pollination between the two mediums. He points to a quote by director Jordan Vogt-Roberts, who’s tasked with the upcoming big-screen adaptation of Metal Gear Solid. In an interview with ScreenRant, Vogt-Roberts says that games have already had success in theaters, likening the 2013 sci-fi flick Snowpiercer to a 2D side-scroller and the 2014 Edge of Tomorrow to a first-person shooter where you can repeatedly reload a level.

“[Vogt-Roberts] really spoke to what we were trying to make with Searching, which was like creating this puzzle for the main character, for David Kim, that everyone watching in a movie theater can also kind of solve alongside him,” said Ohanian. “I hope when the movie ends, hopefully people realize when they look back if they ever get to rewatch the movie, you can solve the entire film as you watch because every answer for the ending puzzle is provided all throughout the film.”

Cinema continues to inform games in method and presentation — just look at Hazelight Studios’ A Way Out and Supermassive Games’ Until Dawn. But games excel at innovating when it comes to user interfaces and interactivity, inventing new ways for players to explore their surroundings and experience personalized stories. They offer valuable lessons and unique perspectives for any artist who wants to create work for a modern audience, and hopefully, more filmmakers will mine them for inspiration.