Video ads that reward app users or gamers for viewing increased significantly as a form of monetization for mobile apps in the U.S., according to a new report (here’s last year’s report) by mobile ad monetization firm Appodeal.

These “rewarded videos” saw a significant increase in the past year when it comes to generating a high effective cost per mille (eCPM), the effective cost for every thousand ad impressions, Appodeal said in its second annual In-App Ad Monetization Performance Index.

The report identifies the top-performing ad networks for mobile ads. In the U.S., the top rewarded video ad networks were Unity Ads, AppLovin, and Tapjoy.

Mobile app developers and publishers are starting to rely on ads more to generate income, but to do it right, they need the right ad monetization strategies, Appodeal said. That includes investing in a variety of types of ads such as rewarded videos, banners, and interstitials.

The U.S. continued to lead with the highest eCPM performance results. In the U.S., rewarded video eCPMs increased significantly, with an average of $13.75 on iOS and $12.01 on Android, while banner and interstitial eCPMs received slight increases to their high-performing results from last year.

Rewarded videos also emerged as a top performer in Western Europe, with an average of $5.77 on iOS and $2.95 on Android. The region also experienced an increase in interstitial eCPMs, and saw banner eCPMs increase on iOS while trending down on Android. 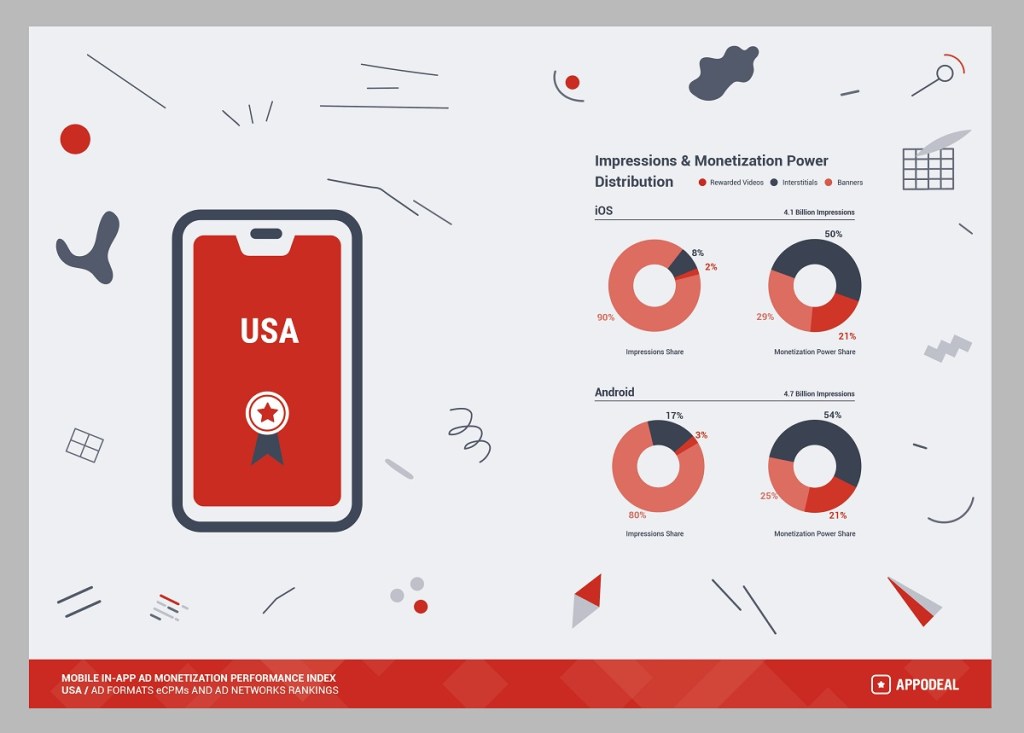 Above: Appodeal’s data on the U.S. market for in-app ad monetization.

Perhaps most notable was the growth rate in East Asia, where rewarded videos received a significant bump in eCPMs on both iOS and Android — averaging at $12.32 and $5.43, respectively. The report looked at 51 billion impressions from 33,000 apps and 60-plus ad demand sources in five different regional markets over six months.

Rewarded videos are user-initiated ads where users can earn in-app rewards in exchange for viewing a video ad.

Rewarded video debuted a mere few years ago, but Appodeal said it has quickly become popular in the ad tech market. New offerings by major players like Google AdMob and Facebook contributed significantly to eCPM growth; however, the inability to serve rewarded videos more frequently is one key barrier as it limits revenue potential.

Overall, interstitials generated the most revenue in all regions (except iOS in South America). Since these full-screen ads can come in the form of a static image, video, or interactive rich media (that is, playable ads), interstitials can be quite flexible as a happy medium between banner ads (with low eCPMs, but high frequency), and rewarded video (with high eCPMs, but low frequency).

Despite being one of the oldest ad formats and having the lowest eCPMs, banners continued to be an important and reliable monetizing ad format thanks to its superior availability of ads and ability to be served frequently or even continuously.

As a result, this format represented about at least a quarter of monetization power share across most regions. In South America, it even made up more than half of the revenue on iOS.

The eCPM trend reports of each ad format can serve as a revenue planning tool. For example, some ad formats’ eCPMs are trending up in certain regions, while some are trending down. Publishers can use this information to make better forecast of what eCPMs they can expect to earn.