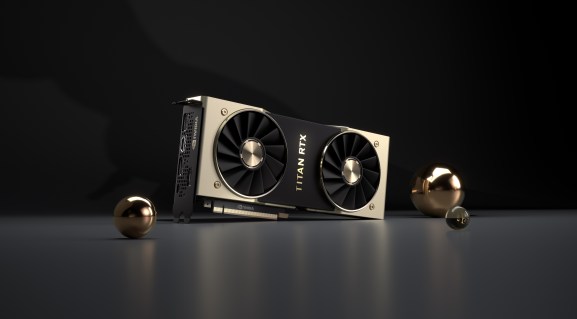 Nvidia today unveiled the Titan RTX, a desktop graphics processing unit (GPU) capable of 130 teraflops of compute power for deep learning and 11 GigaRays a second of ray tracing. Nvidia is also referring to the chip as T-Rex.

The RTX is preceded by the Titan V, which made its debut in December 2017 and was able to achieve 110 teraflops of compute power, and the 2016 release of the Titan X, which can achieve 11 teraflops.

While the Titan V uses the Volta  and Titan X is a Pascal-based chip, the RTX is built with Turing architecture, an approach introduced in August that uses Turing Tensor Cores and works with FP32, FP16, INT8, and INT4 units.

“Turing is Nvidia’s biggest advance in a decade — fusing shaders, ray tracing, and deep learning to reinvent the GPU,” Nvidia CEO Jensen Huang said in a statement shared with VentureBeat. “The introduction of T-Rex puts Turing within reach of millions of the most demanding PC users — developers, scientists, and content creators.”

The T-Rex made its debut today on the first day of the NeurIPS 2018 conference being held in Montreal. At the event, Nvidia researchers also shared a method to create graphics based on real-world video, which could have implications for reinforcement learning and gaming.

In other Nvidia news, last month a decline in cryptocurrency mining and a missed earnings target led to a $23 billion loss in Nvidia market share.