The 30/70 revenue-sharing split that turned into something of an industry standard is on the ropes. Epic Games, the developer responsible for the Fortnite phenomenon, is launching its own game store. And like with its asset store for developers, Epic is planning to take a 12 percent cut of revenues. This will leave 88 percent for the people who actually make the games.

“As a developer ourselves, we have always wanted a platform with great economics that connects us directly with our players,” Epic Games CEO Time Sweeney explained in a statement. “Thanks to the success of Fortnite, we now have this and are ready to share it with other developers.”

Epic is planning to launch its Game Store with a small number of hand-picked titles. It will continue to add games throughout 2019, and Sweeney says his team will “open the store up more widely later on.” It plans to reveal some of the games that will show up on its store at The Game Awards on Thursday, December 6.

The Epic Games Store has an approval process for each game, but the company doesn’t plan to make judgments based on content.

“It will mostly focus on the technical side of things and general quality,” Sweeney told GamesBeat. “Except for adult-only content, we don’t plan to curate based on developers’ creative or artistic expression.”

Is Epic a threat to Steam?

Epic’s new market is a shot across the bow of Valve, which controls a significant portion of the PC gaming business. Valve’s Steam store has traditionally taken a 30 percent cut of revenues from every developer, but it just announced a change to that over the weekend. Steam still takes 30 percent for every game until they make $10 million in sales. From $10 million through $50 million, Steam now takes 25 percent. And it takes just 20 percent for every sale over $50 million.

Valve is clearly attempting to keep blockbuster publishers and developers from jumping to their own platforms. But now the Steam changes also look like a preemptive effort to stay competitive with Epic. But its new tiered revenue-sharing model does leave out indie developers. Epic, however, is making it clear that it plans to take just 12 percent across the board.

“We’re not looking to crush Steam any time soon,” Sweeney explained to GamesBeat. “We’re just building a store with a fair deal for developers that creates new opportunities for content creators.”

While Epic is starting small, the platform’s goal is to disrupt game distribution. And Epic knows that it has to compete with and undercut Steam to do that. The company provided the following graphic with its announcement materials, and it directly compares itself to Steam: 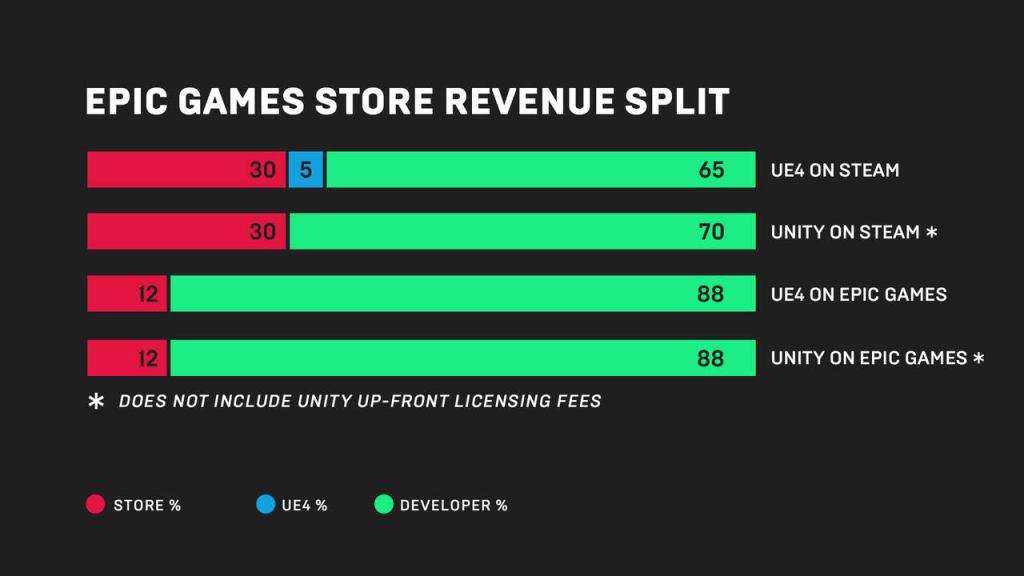 Above: Epic Games Store versus Steam.

You’ll notice the above chart also answers a couple of other questions. For example, Epic welcomes games made with Unity into its store. Epic is known for Fortnite, but it is also the owner and operator of the Unreal Engine game-development toolkit. But the company isn’t planning to use its store to give unfair protections to Unreal.

The chart also shows that Epic won’t charge the 5-percent revenue sharing fee for games that use the Unreal Engine on its store. On Steam, Unreal-based games will still have to fork over 5 percent on top of the 30 percent they must give to Valve.

This is the right time for Epic’s message

While Valve is showing for the first time ever that it is flexible when it comes to the 30/70 revenue model, it may have inadvertently set up Epic to make an even bigger splash with its store announcement. Indie developers are furious with Valve for giving a larger cut to bigger publishers while small studios have to keep giving up $3 out of every $10.

So Epic showing up with a potentially viable alternative to Steam is starting to look like a glass of water in the desert. And Epic only taking $1.20 out of every $10 makes that deal even sweeter.

“Valve’s recent decision to only give certain developers a better cut than the archaic 30/70 split put blood in the water, and Epic opening a store with a better cut is basically shark bait,” Vlambeer cofounder (and de facto indie-gaming spokesperson) Rami Ismail told GamesBeat. “Obviously, the Epic Store announcement has been in the making a lot longer than Valve’s decision to favor certain developers, but for Epic it could not have come at a better time. Any developer — triple-A or indie — will be interested in keeping that additional 18 percent of revenue to increase the chances for future projects.”

Ismail is happy about the cut, but he points out that he’s more excited about competition in the distribution space. Valve started publishing third-party games in 2005, and just a few years later it had a stranglehold on the PC game market. And it wasn’t until the last couple of years that developers and publishers beyond Electronic Arts began launching their own platforms to bypass Valve’s cut.

The lack of competition in PC-game distribution has made the 30/70 split seem immovable. In the gaming world, you will die and pay your taxes, but you also have to give Valve its 30 percent. And the reason that number seemed like someone etched it in stone hundreds of years ago is because the stuff Steam does cheap at scale used to cost individual developers a lot of money.

In a talk at the Game Developers Conference in March, Spiderweb Software developer Jeff Vogel explained why that percentage hasn’t changed.

That stuff includes processing credit cards, running a customer-support system, bandwidth, and a million other tiny details. The 30/70 cut had little to do with how much it costs Valve to operate Steam. Instead, that 30-percent fee came from how much Steam was worth to developers.

It’s easier than ever to do what Steam does

But now it’s looking like that split is not long for this world. And that’s because things have changed. It’s easier than ever to process credit cards. Many developers already employ third-party services to help run their customer support on top of Steam’s built-in tools. Cloud technology is more affordable than ever due to competition between Microsoft, Amazon, and Google, so actually storing and distributing games is more attainable.

That’s why more and more publishers have launched their own platforms. And for indies, they have seen that Itch.io — a platform similar to Steam but for small, experimental indie games — can do nearly everything that Steam does at a fraction of the budget. These alternative platforms and the falling cost of services have put a fracture in the 30/70 cut, and now Epic could kill it for good.

What about the gamers?

Epic’s strategy for now is “developer’s first.” The company is trying to attract companies to its platform with a better revenue split, and that should work. After all, millions of people have now installed the Epic Games Launcher to play Fortnite on their PCs. Now that portal has a store in it as well. So Epic doesn’t have to do a ton of work to present its market to potential customers.

But giving developers a better deal doesn’t necessarily matter to consumers. For the average PC gaming fan, they are likely going to continue prioritizing convenience.

“I’m incredibly curious because in a way we’re going to see a battle between people’s currently owned games in their Steam library competing with Epic’s Fortnite,” said Ismail. “That’s going to be interesting.”

To put that another way, Steam has a huge advantage because so many people already own games on that platform. And those consumers probably won’t want to switch to the Epic Games Store. They won’t want to split their library between two different launchers.

But at the same time, Fortnite is is likely attracting a huge number of first-time PC gamers. If the Epic Games Store has every game that Steam has at similar prices, maybe Epic could capture the next generation of PC players.

Epic does at least plan to offer a refund system, which is something that is a standard on Steam.

“We’re launching with manual refunds through player support, and automated refunds will follow soon,” Sweeney told GamesBeat. “We expect to provide each user with ‘no-questions-asked’ refund tokens to use in the first 14 days after buying a game.”

Blood in the water

Between Epic and Discord, the chat platform that launched a store recently, PC gaming is finally getting some competition. And Sweeney says that’s his most immediate goal.

“We’re giving game developers the store business model that we’ve always wanted as developers ourselves,” he told GamesBeat. “Hopefully, competition between stores will create new opportunities for all game developers.”