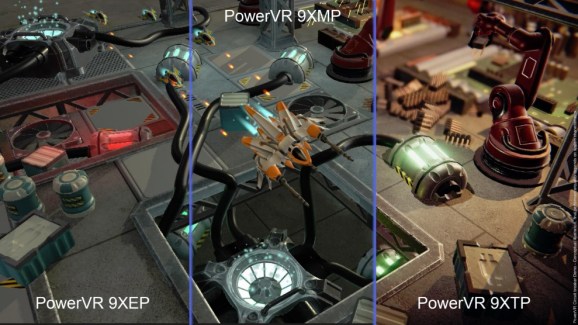 PowerVR's graphics chips have a wide range of uses.

The new designs could be used by chip makers to help improve computing capability in smart cars, smartphones, surveillance cameras, and Internet of Things Devices. They could also make Imagination’s 25-year-old PowerVR architecture more competitive with rivals such as Apple, Nvidia, and ARM.

The new PowerVR Series3NX neural network accelerator will offer a range in performance from 0.6 to 10 tera operations per second (TOPS) with multi-core scaling up beyond 160 TOPS.

“The Series3NX architecture and Series3NX-F are built without compromise,” said Russell James, vice president at Imagination, in a statement. “Together they bring flexibility and scalability, while near doubling top-line performance. This is a game changer, a true enabler for mass AI adoption in embedded devices.”

With design improvements including lossless weight compression, the Series3NX architecture benefits from a 40 percent boost in performance in the same silicon area over the previous generation, giving system-on-chip (SoC) manufacturers a nearly 60 percent improvement in performance efficiency and a 35 percent reduction in bandwidth.

As part of the Series3NX architecture, Imagination is also announcing the PowerVR Series3NX-F (Flexible) IP configuration to provide a balance of functionality and flexibility, combined with industry-leading performance. Using Series3NX-F customers can differentiate and add value to their offerings through the OpenCL framework.

“There are tremendous opportunities to apply AI at the edge to create devices that are more capable, more autonomous and easier to use,” said Jeff Bier, founder of the Embedded Vision Alliance, in a statement. “In many of these applications, a key challenge is achieving the right combination of processing performance, flexibility, cost and power consumption. I applaud Imagination Technologies’ ongoing investment in creating innovative processors to meet these needs.”

Imagination launched the previous generation of its neural network accelerator, the PowerVR Series2NX, in 2017. To date it has been licensed by multiple customers, predominantly focused in the mobile and automotive markets. The designs will be available in the first quarter of 2019.

Meanwhile, the company revealed its new graphics chip designs, including the PowerVR Series9XEP, Series9XMP, and Series9XTP. These range from entry-level graphics to high-end, and include improvements that deliver smooth graphics experiences at lower costs, the company said.

And the PowerVR Series9XTP is based on the new Furian architecture, and it is aimed at GPUs with dramatically increased gaming and computing performance requirements. It is targeted at high-end mobile devices and applications across computers and servers. It can run games at 50 percent better frames-per-second per chip area.

“With PowerVR GPUs, we are focused on helping our customers create products that stand out at any price point,” said Nigel Leeder, executive vice president, PowerVR, Imagination, in a statement. “These new GPUs are the best-ever mainstream PowerVR GPU cores and will enable us to continue to increase our Android device footprint and our overall volume across mobile, set-top boxes, DTVs, and automotive applications. With these latest GPUs, our customers can deliver even more differentiated and exciting products from entry-level to high-end.”

The new GPUs are available for licensing now.